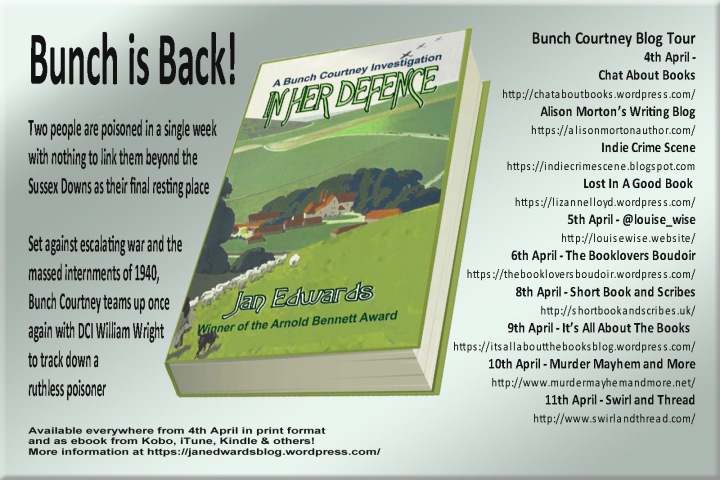 Bunch Courtney is back and is as feisty as ever! She is an excellent character and it has been great to catch up with her again.

Set in Sussex in the month of May, in 1940, In Her Defence is book 2 in the Bunch Courtney series. It starts with Bunch meeting her pregnant sister, Dodo, for lunch on market day and witnessing the horrific murder of a Dutch girl. It’s obvious she has been poisoned, but by who? And why? Bunch is unable to just leave the investigation to the police. She can’t help but try to help figure things out, however often she is warned about interfering!

When an old school friend, Cecile, gets in touch saying that her father has been murdered in a similar way, alarm bells start ringing and Bunch is convinced these poisonings can’t just be a coincidence. She is determined to discover the truth and Cecile’s secretive behaviour is causing her even more concern.

Jan Edwards knows how to write interesting characters with interesting stories to tell. The descriptive language transported me to a time and place I obviously have no experience of, but could easily imagine as I lost myself in the story. It’s so beautifully written, I was completely captivated.

I highly recommend to anyone who loves a good murder mystery, historical or otherwise. 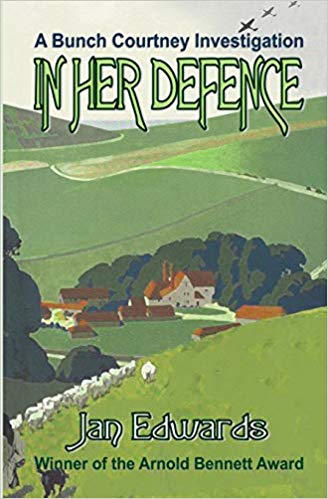 Bunch Courtney’s hopes for a quiet market-day lunch with her sister are shattered when a Dutch refugee dies a horribly painful death before their eyes. A few days later Bunch receives a letter from her old friend Cecile saying that her father, Professor Benoir, has been murdered in an eerily similar fashion. Two deaths by poisoning in a single week. Co-incidence? Bunch does not believe that any more than Chief Inspector William Wright.

If you haven’t read book 1, Winter Downs, as yet, then I highly recommend that you do. It was the winner of the Arnold Bennett Award don’t you know!

She is part of the script team writing Olive Hawthorne: Daemons of Devils End – a 3 disc Dr Who DVD. As an editor Jan has produced fiction anthologies with editing partner Jenny Barber for The Alchemy Press and Fox Spirit Press. Jan has ghost written for several other titles.

Born in Sussex, despite her thoroughly celtic parentage, Jan is currently living in Staffs Moorlands with 3 cats and husband, Peter Coleborn. In addition to being a writer she is also a Reiki Master Teacher and Meditational Healer and has been (in no particular order) Master Locksmith, motorcycle seller, bookseller, civil servant, ostler, market gardener, librarian…