I am delighted to be today’s stop on Dylan H Jones’ Anglesey Blue blog tour! 🙂 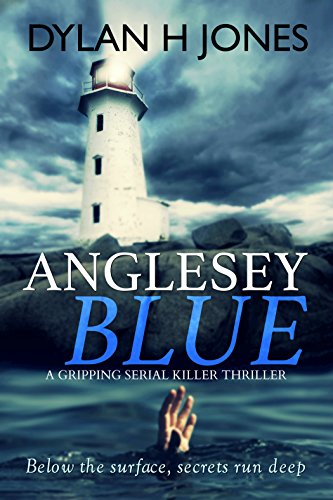 It’s not the homecoming Detective Inspector Tudor Manx was expecting, but solving the case is just the start of his problems.

Recently transferred from the London Met to the North Wales Constabulary, Detective Inspector Tudor Manx has come to Island of Anglesey hoping for a quiet life.

But his hopes are dashed when a brutally mutilated body is found crucified to the bow of a fishing boat sending shockwaves through the peaceful community.

Manx’s faces pressure to solve the case quickly equipped with an inexperienced team.

Is the body a message or a premonition of more murders to come?

Adding to his mounting problems, Manx’s troubled past returns to haunt him. Manx left the island after the disappearance of his younger sister, Miriam; a cold case that still remains unsolved.

Can Manx solve the case before the body count rises?

How will he cope when he is forced to choose between his family and his duty as a police officer?

This is the first book in the thrilling new DI Tudor Manx series.

“I’ll do you for a fiver,” the barmaid said, extending her long, perfectly manicured fingernails across the bar, and sliding a freshly poured pint his way. “Make you feel like a new man, but don’t go telling every man Jack or they’ll all be expecting discounts.”

Detective Inspector Tudor Manx took a slow, considered sip of his bitter. “A new man? Still got a few miles left on the old one yet, thanks.”

“Oh, right! Proper George Clooney you are, too. Got a couple of them supermodels waiting back at the semi-detached, like?”

“And they love me just the way I am, bad hair and all,” Manx said, leaning back and puffing his chest, as if to emphasise the point.

Gwen smiled. “Just the hair, is it? They didn’t have the heart to tell you about that jumper, then?”

“Finest Anglesey wool,” Manx said, running his hands down the length of his jumper. “They don’t shear them like this anymore.”

“Thank Duw for that. Probably a health hazard by now.”

Manx dropped his chin, and assessed the article of clothing in question. There was no doubt it had seen better days. Its once snow-white hue had turned a jaundiced yellow, resembling the fingertips of a life-long smoker. He was sure it possessed some sentimental value, but couldn’t, right now, pinpoint where, or why. The fact he was even wearing a jumper was testament to the sharp, cold turn the weather had taken. Manx’s choice of wardrobe had always been uncomplicated and predictable: a limited colour palette of white Oxford shirt, a slim, black necktie left loose at the collar, black straight-legged jeans, a black sports jacket (either wool, linen, or leather, depending on the weather), and black, chisel–toe Blundstone boots, which he purchased off the internet, directly from the factory in Tasmania.

Manx sipped at his bitter, and tugged absentmindedly at a loose strand of wool—one of many trailing, like an unfinished sentence, from his sleeve. The material unraveled rapidly, gaining twelve inches in length in the short time it took him to dispose of the errant thread.

“Keep pulling, and I’ll have to throw you out for indecent exposure,” Gwen said.

“Probably be the most excitement you’ve had round here for a while.”

Gwen finished scooping the inside of a beer glass with a towel, and leant over the bar. “If it’s excitement you’re looking for, you’re a day too late. His landlordship holds these pub quizzes, every Friday night. Reckons it makes customers spend more on booze. Anyway, it was Pop Trivia night, so the place was heaving.”

“You’re telling me. Nearly had a bloody riot on my hands. Should have had you lot on speed dial.”

Don’t forget to catch up with, and follow, the rest of the blog tour with these lovely book bloggers…..