I’m the author of two novels, The Herbal Detective (Ringwood Publishing) and The Things We Learn When We’re Dead (Accent Press). A third novel, Dark Matters, is due to be published by Accent Press in January 2018.

I was born and brought up in the west of Scotland, which really wasn’t my fault, and am a graduate of the University of Edinburgh. I then worked briefly as a street actor, baby photographer, puppeteer and restaurant dogsbody before becoming a journalist. I started in Glasgow and ended up in London.

Surprisingly, I was approached by a government agency to work in intelligence, which just shows how shoddy government recruitment was back then. However, it turned out to be very boring and, craving excitement and adventure, I ended up as a PR consultant, which is the fate of all journalists who haven’t won a Pulitzer Prize, and which is what I’m still doing.

I am married with two grown-up children and live in East Lothian. And that’s about it.

I wish I knew. My first book, The Herbal Detective, is a satire on superstition. In the dim and distant past I studied Scottish history, with a particular module on the witch craze. I was struck by how religious belief and medieval superstition could produce such a murderous outcome – and how we’ve been doing the same thing ever since: finding scapegoats to blame everything on. Those things can be single mothers, Muslims, immigrants, benefits scroungers – anyone that the Daily Mail decides is the root of all our problems. It always seemed to me to be a good starting point for a novel: to satirise how scapegoats can sometimes become victims.

My second novel, The Thing We Learn When We’re Dead, came to me on a train from Edinburgh to London, which is apt because Edinburgh, as a civilised place, is the only city in the world to have named its main railway station after a book. It is, essentially, a modern retelling of the Wizard of Oz – how a young woman comes to look back at her life to find a new beginning. It’s a story that’s been written many times before, because everything under the sun has been written many times before, but I hope it has imagination and originality.

All of which doesn’t really answer your question!

No. I suppose that James Bond and Sherlock Holmes were loosely based on an amalgam of characters that their creators knew. But for most writers, I think that part of the fun of writing is thinking up new characters. I don’t think I would ever base a character on someone I knew – unfair, and sloppy.

In a funny way, they choose them. I don’t set out with names for my characters. In the book I’m working on at the moment, all the characters have provisional names. Once I get to know them a bit better, I’ll then decide what their real names are.

In the past, I would write most days. That was my routine, and I was determined to stick to it. Trouble was, most of the stuff I wrote went in the bin. I’ve learned that, for me, I should only write when I know what I want to write, and how it will all fit together into a fully-realised narrative. That means that, when I write, I write with greater purpose. (That’s probably a coded way of admitting that I’m a lazy writer).

Although I haven’t read him for years, Ernest Hemingway. He was a big influence on me. Likewise, Fay Weldon whose body of work is immense and, of course, Graham Greene. Mostly I read contemporary fiction, and Joanne Harris has to be top of my pile, with the likes of Kate Atkinson a close second.

Hemingway, if only to ask whether he really did mean to shoot himself.

Absolutely. A book that had an enormous influence on me was Jenny by Paul Gallico – a beautiful story of friendship, as narrated by a boy who is turned into a cat. In many ways, that’s also a Wizard of Oz interpretation: small boy in dream-world imagining a different way to see the world. Maybe that’s what gave me the idea for my current novel.

I wrote my first “novel” aged about fifteen, and burned it shortly afterwards. The idea of a Fourth Reich having a secret base in the Norfolk Broads seemed absurd, even to me. My second was written when I was about seventeen, and I still have that. Nobody will ever get to read it. My third was completed a year later, by which time I had learned to type. It will also never, ever see the light of day.

The Bible and every other religious text. They would end: believe in me if you have to, but it’s not compulsory and, for God’s sake, try to get along with everyone else. In my view, a lot of the world’s problems are caused by religious belief. In my current book, I do ask: would the world be a better place if we all stopped believing in God. It’s not a question I answer; but it is a pertinent question.

Chocolat by Joanne Harris, or One Day by David Nicholls. Joanne’s book is simply sublime in its beauty and simplicity; David’s is the book that many authors wish they had written. The conceit of setting it only on one day over a period of years? Brilliant!

Crows and Seagulls. (I’m trying to train a crow in our garden, and I hate seagulls).

I think I’d take Lorna Love, the central character in my current book. She’s complicated and feisty and young enough to be my daughter, and the book ends in 2007. I’d like to see how she’s got on, and whether she’s happy. One of the sadnesses of writing a stand-alone novel is that you don’t see your characters again. As the book is mostly based in Edinburgh, she’ll probably know where to take me.

It’s provisionally entitled Darker Matters and is a book about love, loss, family and astrophysics. It’s a dark comedy and one, I hope, that’s filled with compassion and a bit of fun. But it also has its dark and quirky side, because everything in life has a dark and quirky side.

My current novel was launched in East Lothian’s last independent bookshop and at the rather wonderful Edinburgh Bookshop in…um…Edinburgh. Bookshops are there to be supported because, once they’re gone, they’re gone. I’d encourage everyone to try and break the Amazon habit.

Many, many things, most of which would be very boring.

Thank you for taking the time to answer my questions, Charlie. 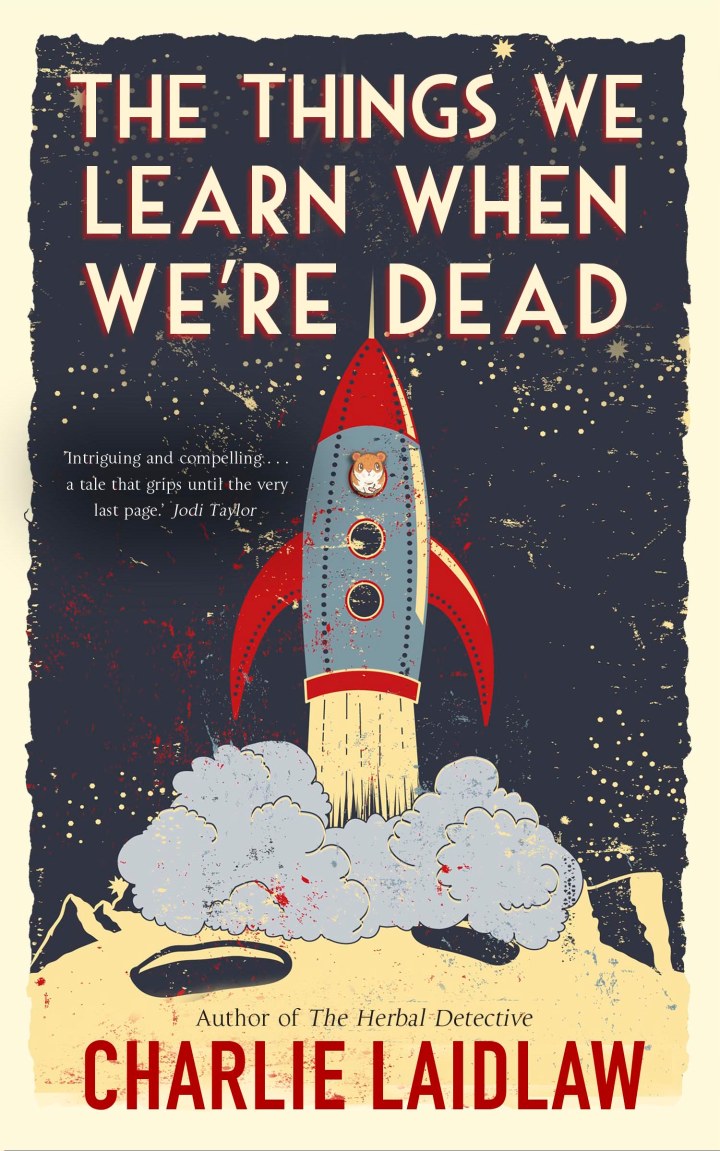 The Things We Learn When We’re Dead

The Things We Learn When We’re Dead is a modern fairytale of love and loss. It’s about the subtle ways in which we change, and how the small decisions that we make can have profound and unintended consequences.

On one level, the book is a simple story of a young woman’s life. But, for those readers who want to make the connection, The Things We Learn is also a retelling of The Wizard of Oz: how a young woman in ultimately tragic circumstances comes to reassess her life and find a new beginning.

Lorna Love, born and brought up in small-town Scotland, is apparently killed in a car accident on the day of the London bus and tube bombings. But the afterlife isn’t quite what she expected. For a start, Heaven is a broken-down spaceship and God is the double of Sean Connery.

However, the book is neither fantasy nor sci-fi; Heaven simply a dreamscape through which Lorna comes to see her life through new eyes. It allows the narrative to move between Heaven and Earth, retelling Lorna’s life in flashback – from the people she loved, to the death of her brother, and the ill-fated pregnancy and termination that precipitated her accident. The emotional finale of the book is when her best friend becomes a victim of the King’s Cross underground train bombing.

The reader will understand the overall familiarity and tradition of the utopia/dystopia narrative and that Lorna is far from dead. As Heaven begins to offer mirror-images of her life on Earth, the reader will also understand that the book is about why Lorna went to Heaven and why she’ll be given a second chance of life.

In fulfilling familiar expectations, the book offers a counterpoint between the absurdities of Lorna’s imagined Heaven and banality of her rather ordinary life. The book, grounded in the 9/11 and 7/7 bombings, also offers the metaphor that we are all connected, even by distant events.

It is, essentially, a humorous book, using an oblique construct to provide a new perspective on a familiar theme. But, while making the familiar unfamiliar – and therefore making the readers’ journey worthwhile – it also reassures them that Lorna will have her second chance.

Of course, like Dorothy before her, Lorna chooses to go home.

This is where I would normally add a link to the book on Amazon, but given that the author would encourage everyone to break the Amazon habit, I won’t, but suggest you keep a look out for Charlie Laidlaw’s books in your local book shop 🙂