Hi and welcome to my stop on Tom Trott’s The Benevolent Dictator blog tour!

Many thanks to Tom Trott and Rachel @ Rachel’s Random Resources 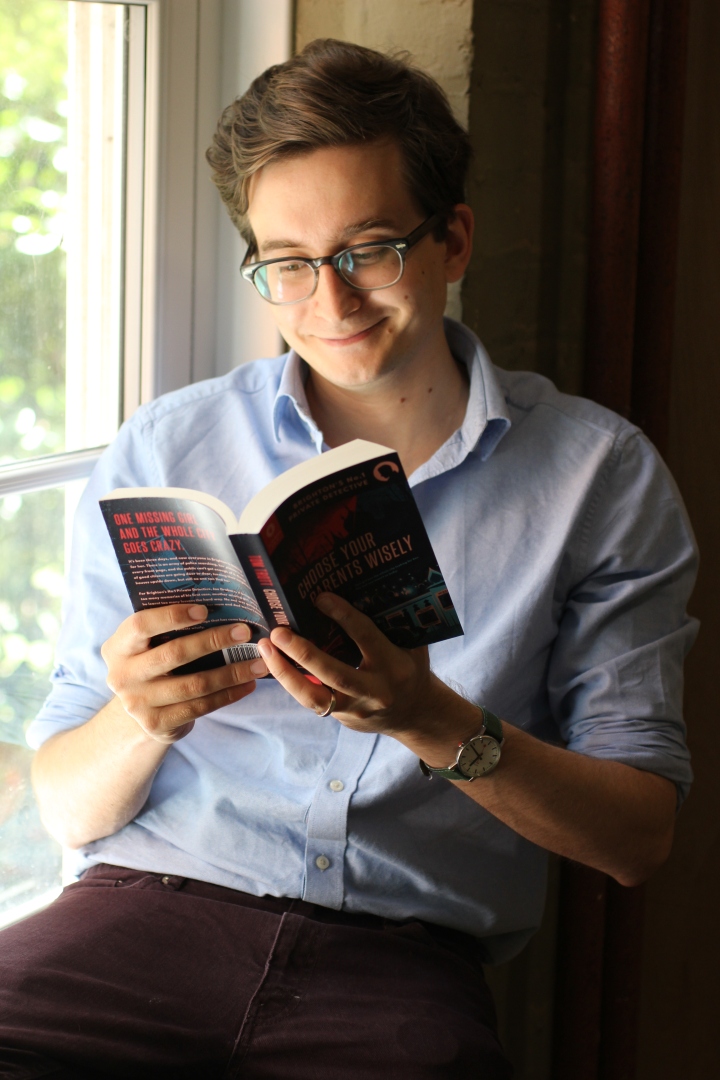 Sure, I’m from Brighton, and both my previous books (You Can’t Make Old Friends, and Choose Your Parents Wisely) were set there. They are detective novels, which is the genre I’m most comfortable in. For my latest book, The Benevolent Dictator, I felt inspired to do something entirely different: a political thriller set in the Middle East. I’m pretty young (still in my twenties) and know nothing about anything, which means I have to do an awful lot of research, but thankfully I’m naturally curious so I enjoy the process.

My subconscious cooked up the idea for The Benevolent Dictator from a combination of The Great Gatsby, Ozymandias, and the Adam Curtis documentary Hypernormalisation. Generally speaking I’m a thematic writer: I know what theme I want to write about and I’m always just searching for the right story and characters to explore that theme.

This is my most personal book, in that the character of Ben Hollow (the narrator) is much more closely based on myself than anything I’ve previously written. He is me if I had followed a different path, but he’s also inspired by my perceptions of some real life figures. When I write my Brighton-set novels I very often use people I know as inspiration; some of them manage to spot themselves, but many more don’t!

With the two principle characters of The Benevolent Dictator I actually used two different approaches. For the narrator, Ben Hollow, I recycled a name I had used in something unpublished. I loved the symbolism of the name Hollow, and how it suggested the idea of seeing the book through his eyes. For the title character, Amal, I trawled through Arabic names until I found one with a meaning I felt was appropriate, in this case “hope”. It’s actually a female name, so I had to explain that away in the book because I didn’t want to give up good symbolism. For the rest of the characters I used a similar approach to Amal, finding names that either suggested how others saw them, or their true nature underneath.

I have a day job, so for me it’s very much about snatching moments to write and do what I can when I can. I plan quite carefully (a four of five line paragraph for each 3000 word chapter) and that means that I don’t have to do a lot of figuring out when I’m writing.

Raymond Chandler is my number one, and where I go for comfort reading. Agatha Christie is number two for sure. Then I’d have to fill in the rest with Arthur Conan Doyle for pure ridiculous fun, J R R Tolkien for a fully realised world, and Daphne Du Maurier for atmosphere.

Agatha Christie, and I would ask her how she kept innovating. People who have never read her novels have a perception of them as formulaic, but I have never seen any mystery novelist so consistently innovate from book to book. She knows you’ve read the last book and she uses it to trick you in the next one.

Perhaps above average, but I didn’t devour books in the way some people do and still don’t. I envy people who read a book a week. I’m a slow reader by choice, I like to luxuriate in the world.

When I was too young to remember, but back then it was plays and sketches, nothing so formal or disciplined as prose.

That’s a very hard question. I don’t think I’ve ever been disappointed by the end of a book, but it’s more likely that I don’t remember them because they weren’t good enough to stick in the memory. Of course it would be tempting to give a happy ending to something, but it would be a betrayal of the story. With my own books I know there are bigger twists I could put in, but they betray the central theme and that’s what I’m most concerned with. I would perhaps add an extra five pages onto the end of Murder on the Orient Express, it ends very abruptly and without emotional resolution.

Moving On (which I think is the secret to both good writing and general happiness).

Philip Marlowe, and just your average dive. He’d have some stories to tell.

The third in my detective series, I’m already two-thirds in. I’m not revealing the title yet but the initials are I.N.G.A. and the clue is The Two Jakes. No one has figured it out yet, if they do I might put their name in the book!

Anxiously look at the KDP, Createspace, and ACX dashboards to see if anyone is buying my book. Then I tend to just get on with my day, there’s nothing to celebrate unless people buy it. I’m much more likely to celebrate the day I finish typing.

Just that The Benevolent Dictator is available in paperback, kindle, and audiobook, so there’s no excuse not to read it!

Thank you for taking the time to answer my questions, Tom 🙂 x

Ben longs to be prime minister one day. But with no political connections, he is about to crash out of a Masters degree with no future ahead. So when by chance he becomes fast friends with a young Arab prince, and is offered a job in his government, he jumps at the chance to get on the political ladder.

Amal dreads the throne. And with Ben’s help he wants to reform his country, steering it onto a path towards democracy. But with the king’s health failing, revolutionaries in the streets, and terrorism threatening everyone, the country is ready to tear itself apart.

Alone in a hostile land, Ben must help Amal weigh what is best against what is right, making decisions that will risk his country, his family, and his life.

Tom Trott was born in Brighton. He first started writing at Junior School, where he and a group of friends devised and performed comedy plays for school assemblies, much to the amusement of their fellow pupils. Since leaving school and growing up to be a big boy, he has written a short comedy play that was performed at the Theatre Royal Brighton in May 2014 as part of the Brighton Festival; he has written Daye’s Work, a television pilot for the local Brighton channel, and he has won the Empire Award (thriller category) in the 2015 New York Screenplay Contest. He is the proverbial Brighton rock, and currently lives in the city with his wife.