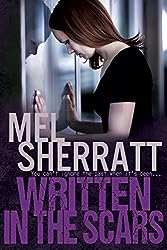 After years of living as a single parent, all Donna Adams longs for is someone to make her smile, to share hopes and dreams with, to keep her warm at night. But when that certain someone gives her the attention she craves, true love doesn’t always follow the right path.

Home from the army, Lewis is a changed man. Angry and consumed by grief, troubled by nightmares and flashbacks, his mind is worse now than ever. Shutting out what he’s seen isn’t easy, but he risks losing everything he’s come back to if he doesn’t, including his sanity.

Megan Cooper hides her scars for fear of being rejected. Mary Marshall can’t always remember how she got hers.

If the past could be erased to make a better future, we’d all want that, wouldn’t we? But life is never that easy for the residents of The Mitchell Estate…

WRITTEN IN THE SCARS is the fourth book in The Estate Series but each one can be read as a standalone novel.

Having already read the first three books in the Estate Series as well as the Allie Shenton Series, Watching Over You, Secrets on the Estate and Stirred With Love written under her pen-name, Marcie Steele, I was very excited to be one of a lucky few to receive an advance review copy of Written In The Scars.

Once again I was immersed in the lives of those living on the Mitchell Estate. It’s a bit like catching up on the gossip with an old friend you haven’t seen for a while.

Donna is a single parent, with grown up children who she still worries about constantly. Her son, Sam, is a petty thief, living on benefits, but she’s right at his side when he badly injures his hand in an accident. Her daughter, Keera, works and keeps herself out of trouble at least. Or so Donna believes. Her mother, Mary, has dementia and barely recognises her anymore. As much as she loves her family she craves more from life, surely she’s not ready for the scrapheap yet. She’s only in her 40’s. So when she meets Owen, who is only in his 30’s she finally allows herself a bit of fun. Why should she not be allowed a bit of time to herself? What’s the worst that can happen?

Lewis has returned from the Army a different man. Obviously suffering from PTSD after witnessing the death of a friend, but unwilling to seek help he finds himself visited regularly by Josie, the local housing officer, after complaints regarding his unsocial behaviour. His Dad died suddenly, but he’s unable to talk to his Mum about it. His marriage has broken down and he doesn’t spend as much time with his son as he’d like. Why does no-one understand how he feels? Why are they always on his case?

Megan has a birthmark which covers most of her face, but wears make-up to conceal it. Her biggest fear is rejection. When she meets Sam at the hospital, after his accident, there is an obvious spark between them. How can she get close to him though when she’s sure he’ll be repulsed by the sight of her without make-up? Sam is wondering if he’s good enough for her though considering the life he’s led so far.

This book is full of real characters with average day-to-day lives and real problems. They could easily be living in your street.

I can personally relate to Mary’s story as my Grandad has recently been diagnosed with a dementia. It’s heartbreaking to watch someone you love disappear before your eyes, but still physically be there.

Although difficult to read at times, I think it’s great how Lewis’s story will help to raise awareness of PTSD and how devastating it can be for everyone involved.

I love how believable all of the characters are, across the whole series, whether they are likeable or not.

Brilliant! I can’t wait for book 5!

Many thanks again to Mel for my advance review copy.

Proud to be part of ‘Team Sherratt.’

3 thoughts on “Mel Sherratt – Written In The Scars – The Estate Series, Book 4”