I am thrilled to be todays stop on Hattie Holden Edmonds’ / RedDoor Publishing’s Blog Tour for Cinema Lumière. 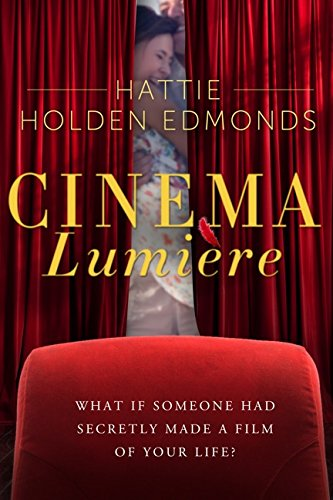 I will be sharing my review later on in the post, but first I have a Q&A with the author herself for you to enjoy…..

My name’s Hattie Edmonds (I use my fanciful middle name Holden when I write) and I’m a bit of a late bloomer in that I didn’t start writing fiction until I was 35. In my 20’s I worked for a pop magazine, interviewing more boy bands than you can shake a teddy at. After that, I became the in-house writer at Comic Relief, working on projects with some of my comedy heroes – Steve Coogan, Sacha Baron Cohen, Richard Curtis and Armando Iannucci. Cinema Lumière is my first novel and it took 7 years to write (I know, bit embarrassing). It’s about a cinema with one seat where you are shown a film of your life. Now I write full time, including a blog on the Huffington Post and volunteering for the refugee charity CalAid as their copywriter. I also run a ramshackle cinema from a fisherman’s hut in Whitstable.

The idea for Cinema Lumière came from two different sources – the first was a non-fiction book called Testimony of Light by Helen Greaves, which follows the true story of Helen’s friend Frances Banks, who died (deep breath – huge leap of faith required here!) and yet was able to return and describe to Helen what she was experiencing ‘on the other side.’

One of the most fascinating aspects of the book was the bit about seeing a Life Review of your time on earth, or as Frances describes it ‘a kaleidoscopic series of pictures which covers the entire cycle of your life’.

Otherwise, ideas can come from conversations, quotes, snippets from the newspaper etc. I love reading spiritual books (whether about Sufism, Buddhist philosophy or channeling, doesn’t matter, I’ll devour it!) as well as science books. I do like a good firm fact!

First novels are often quite autobiographical and Cinema Lumière is no exception. The main character Hannah has some similar traits to me, including the one where she compulsively imagines the worst possible things she can say or do in any given situation – like telling her new boyfriend’s mother that the Sunday roast she has just lovingly prepared for her son and his new girlfriend, tastes like shit.

I know writers are supposed to use names which mean something, but for me the names are just ones I happen to like and which seem to fit. Nothing deeper than that, I’m afraid.

Step 1. See/ hear/ read something that sparks my interest. Jot it down in my little blue notebook with my 20 year old Parker ink pen, whose top looks really unsavoury because I’ve chewed it to bits.

Step 2. Get cracking on the research (I love this bit). For the first book, aside from copious internet trawling, I interviewed several doctors who had written about Near Death experiences where their patients had reported being shown a film of their life, while they were unconscious. At the moment I am interviewing heart specialists because my third book is about the human heart.

Step 3. Start to get the first draft down. This will be unintelligible nonsense to anyone but me. The second draft won’t be much better. But by draft nr 15 (I’m pretty obsessive about language so each draft takes forever), it’s hopefully a bit better.

It’s so tricky to narrow it down to one. I love the poetry of Ben Okri, the humour of Nick Hornby and the mind-stretchy ideas of Audrey Niffenegger (The Time Traveler’s Wife). Can I cram them all into a blender and see what comes out?

The Argentine writer Jorge Luis Borges. I’d ask if I could crawl inside his head and experience the world through his eyes – and thoughts.

I used to read a lot – but very old school choices such as Swallows and Amazons and Mallory Towers. I definitely wasn’t one of those children tearing through Dostoevsky at the age of twelve.

I started writing about music at university. U2 was the very first band I interviewed, before they were big. I totally ballsed it up by asking Bono where in America he was from (the interview took place after a gig and I was quite well refreshed). To this day I have no idea why I thought he was American.

I’ve just finished my second novel The House of Optics, so now I am finding out some fascinating stuff about the human heart for the third. Did you know that every day the heart creates enough energy to drive a truck 20 miles, which in the average lifetime is equivalent to driving to the moon and back? Nope, nor did I until this morning.

October 2017 for The House of Optics – if all goes according to my mini self-made masterplan.

Thank you so much to Hattie for answering my questions 🙂

Cinema Lumière is quite different to other books I have read recently and I have really enjoyed the change of pace to be honest. This is a beautifully written story of real life, friendship, love, loss, regrets and trying to move on from the past.

Hannah Bailey is a very likeable character. I warmed to her straight away. She obviously doesn’t love her job, but like a lot of people, just gets on with it as bills have to be paid. I liked the friendship she builds with Ian when he starts to work with her.

Hannah doesn’t spend nearly enough time with her mother, which she is well aware of, but I think this makes her all the more believable. I think we’re all guilty of assuming those we love will be around forever.

I have to say that Nellie is one of my favourite characters. Nellie is a British Bulldog and is just awesome! I love that she is written with equal importance to the human characters. After all, she was a gift to Hannah, from Victor, when she needed her the most. I love the friendship she shares with Victor and their mutual love of films. It soon becomes clear that Hannah and Victor share a secret, something Hannah doesn’t like to talk about, but we don’t find out what until much later on. This kept me intrigued all the way through as well as wanting to know what happened with Luke, although I did hazard a good guess. Luke was not a character I warmed to, but I really liked Joe and was routing for him and Hannah.

The story flits between the present and 2009 where chapter by chapter we discover what Hannah is trying her best to move on from to secure a happier future.

This book made me laugh out loud at times and cry at others. It’s a very moving story and one I will happily recommend.

Many thanks to Anna at RedDoor Publishing for my paperback review copy.

‘A magical, thought-provoking and uplifting tale … one of this year’s must-reads’ –Daily Mirror

‘A stunning debut. Made me laugh out loud, cry … and ache with recognition –The Huffington Post

What if someone had secretly made a film of your life? Hannah Bailey has resigned herself to a dead-end job, she’s sealed her heart against love and her catastrophic thinking is out of control. In fact, she’s hard pushed to find a single reason for her existence until the day she stumbles across a tiny one-seated cinema and its mysterious French owner Victor Lever… Cinema Lumière doesn’t screen Hollywood blockbusters or even low budget arthouse indies. Instead it shows people films of their lives. But how does Victor create such unique biopics and why is he so determined to coax Hannah into that single red velvet seat?

Set between the bustling streets of both Portobello and Paris, Cinema Lumière turns a literary projector on the timeless experiences of love and loss. If you liked The Time Traveller’s Wife and One Day, this could well be the book for you.

All you need to do is comment on this post, in the box below, by midnight on 31st July and a winner will be chosen at random on 1st August.

Cinema Lumiere is nominated for The People’s Book Prize 2016 in the Summer Fiction collection.

Here is the link to vote: http://www.peoplesbookprize.com/book.php?id=1407

Congratulations and good luck to Hattie and RedDoor Publishing!

Don’t forget to check out the other stops on the Cinema Lumière blog tour…..