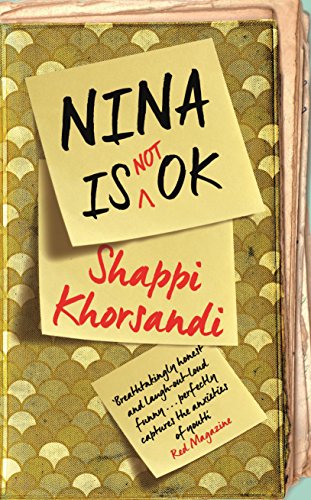 I have to start by saying that the author first attracted me to this book. I find Shappi Khorsandi’s stand-up comedy hilarious! I had expected Nina is Not OK to be hilarious too and it is at times, but mostly I found it quite sad.

Nina is 17. She lost her Dad when she was just 9 years old and is obviously still grieving. She struggles with the fact that her Mum has moved on with Alan, but she loves her baby sister and wouldn’t be without her (they are so cute together). However, she is spiralling out of control. Following in her fathers footsteps.

Nina has the usual teenage worries, with friends, family issues and college, but to me she seemed much older than her 17 years. Maybe because I was 18 before I had my first boyfriend, I found Nina’s antics quite shocking. I certainly hope my daughter doesn’t behave this way at 17! She would be grounded until she’s 35!! Seriously, I know all teenagers need to make their mistakes in order to grow up, but 17 seems really young for some of Nina’s behaviour. Maybe I’m just really old!! It certainly highlights how easily having a few drinks with friends can turn from being a bit fun into a dangerous situation.

I did really like Nina. I was completely drawn to her character and felt really sad for her, even though she could be a brat to her mother! (These scenes really did show her immaturity!)

I don’t want to say too much because of spoiling the story for others, but she certainly doesn’t deserve the way she is a treated one Saturday night. She is a very likeable character with more than the average teenager has to deal with, and I very much wanted her to be OK.

I’ve found this book quite difficult to review. I can’t find the right words to do it justice at all! I don’t want you to think it’s totally depressing because it really isn’t. It’s very well written. It WILL make you laugh! It will make you cry, I’m sure. I was obviously reading it as a mother of a teenage daughter.

I will be interested to see what others think of it. I would certainly recommend it.

Buy your copy here – Nina is Not OK by Shappi Khorsandi

Nina does not have a drinking problem. She likes a drink, sure. But what 17-year-old doesn’t?

Nina’s mum isn’t so sure. But she’s busy with her new husband and five year old Katie. And Nina’s almost an adult after all.

And if Nina sometimes wakes up with little memory of what happened the night before , then her friends are all too happy to fill in the blanks. Nina’s drunken exploits are the stuff of college legend.

But then one dark Sunday morning, even her friends can’t help piece together Saturday night. All Nina feels is a deep sense of shame, that something very bad has happened to her…

A dark, funny – sometimes shocking – coming of age novel from one of the UK’s leading comedians. NINA IS NOT O.K. will appeal to fans of Caitlin Moran and Lena Dunham.

“Shappi Khorsandi is both funny and shocking, yet above all writes with warmth, giving Nina an intelligent voice. This girl could be you, or your daughter, or your friend, and I defy anyone not to love the endearing, messed-up Nina as she finds her way out of an alcohol-fuelled hell of her own making.” (Daily Mail)

2 thoughts on “Nina is Not OK by Shappi Khorsandi”