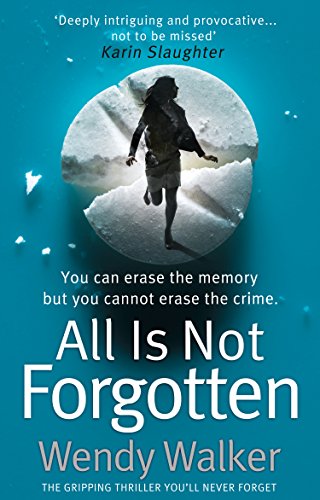 I finished All Is Not Forgotten at 00.35 this morning as I couldn’t sleep until I got to the end. It is a fantastic read! Not a particularly pleasant read, given the subject matter, but brilliantly written. I was well and truly gripped. It is tagged as “the gripping thriller you’ll never forget” and that is a more than fair assessment of this book. I’m pretty sure this one will stay with me.

15 year old Jenny is brutally raped, but she remembers nothing about it thanks to an experimental treatment which has erased the memory. This is agreed to by her parents in the hope that she will be able to move on without the horrific attack affecting the rest of her life. Her physical wounds heal, but Jenny is no longer herself, the fun-loving Jenny her parents and friends are used to. Was erasing her memory the best treatment for her after all?

All Is Not Forgotten is narrated by Jenny’s psychiatrist. I really enjoyed the fact that it is written from a psychological perspective. Psychology fascinates me, it always has. I’m not sure I liked the doctor’s character, but he is certainly interesting. He is obviously passionate about his job, but came across to me as feeling quite superior to others. Then again I guess you would have to have plenty of self-confidence to be a successful psychiatrist. I’m not sure I would want to be married to one! Anyway, he is determined to help Jenny to remember that horrendous night as he believes it is the only way she will ever be able to truly move on. As we follow Jenny’s treatment, along with her parents (individually) and other patients, shocking secrets are revealed and emotions run high as the investigation seems to go cold. With Jenny having her memory wiped there is less to work on. Will they ever find out who is responsible for this horrific crime? I thought I knew where the story was going a few times, but as usual I was wrong!

Completely compelling! A scary read, though, especially with having teenagers of my own.

Many thanks to the author and publisher for approving my request on Netgalley. I will be more than happy to recommend!

Buy your copy of All Is Not Forgotten HERE

For fans of The Girl on the Train and Gone Girl, All Is Not Forgotten is the next ‘grip-lit’ sensation.

You can erase the memory. But you cannot erase the crime.

Jenny’s wounds have healed.
An experimental treatment has removed the memory of a horrific and degrading attack.
She is moving on with her life.

That was the plan. Except it’s not working out.
Something has gone. The light in the eyes. And something was left behind. A scar. On her lower back. Which she can’t stop touching.
And she’s getting worse.
Not to mention the fact that her father is obsessed with finding her attacker and her mother is in toxic denial.

It may be that the only way to uncover what’s wrong is to help Jenny recover her memory. But even if it can be done, pulling at the threads of her suppressed experience will unravel much more than the truth about her attack.

‘Our favourite thriller of the year so far.’
-–CLOSER

‘An assured, powerful, polished novel that blends suspense and rich family drama. Built on a fascinating scientific premise and laced with moral complexity, it is, in a word, unforgettable’ –William Landay, author of DEFENDING JACOB

‘Captivating and bold, Wendy Walker takes an incisive look at the importance of memory and the power of manipulation. Fascinating and at times shocking, ALL IS NOT FORGOTTEN is one book you won t easily forget. Not to be missed! – Mary Kubica, author of THE GOOD GIRL

Wendy Walker has worked as an attorney specialising in family law. She lives in Connecticut where she is at work on her next novel.

6 thoughts on “All Is Not Forgotten: The gripping thriller you’ll never forget by Wendy Walker”