Today I am very pleased to welcome Dan Klefstad to my blog. Dan very kindly agreed to answer my questions. I’m sure you’ll enjoy his answers…..

I want to tell stories that blend a life story with a letter addressed to a specific person. So my novel Shepherd & the Professor is the fictional memoir of Susan Shepherd — Gulf War vet, cop and single mom — but it’s also a query letter to an unnamed editor at an unnamed publishing house. At first I worried about addressing a story to one person (the editor) about whom Shepherd and the reader knows nothing. Then I realized when you (or your protagonist) speak to one person, you’re speaking to everyone who reads it — That is, if you make it an honest revealing of your main character. I hoped this would make it especially easy to identify with my protagonist, or even the addressee. Now I’m ready for the reader to judge.

I’m going to say something most writers say, and then I’ll put a spin on it: Write what you know; then use your imagination. I started with very basic characteristics belonging to my wife Susan, myself, and the university town we live in. Then my imagination took over and blew up several traits into things that might be, or could’ve been, or could never possibly be. I wasn’t happy with the story until I created an alternate universe that barely resembles the one I live in.

Continuing with the above, every character is a composite or completely made up. I’m pretty sure no one will accuse me of modeling a character after them. And why would I? If your aim is to write a compelling story, then using everyday people will keep it stuck on the ground. Very few of us are so interesting that we could inspire a page-turner by ourselves. That’s actually a compliment if you think about it: How many friends do you have? Now think about how many friends Sean Penn has, or someone equally fascinating? I’ll bet you’re way ahead on that count.

I pick the first name that comes into my head and stay with it awhile. After revisions, after the story evolves, I go back and change some names. In the case of Shepherd, I picked Susan Shepherd right away and it stuck. She’s a protector by nature, so Shepherd made sense all the way to the final edit.

I have a day job so I write on weekends or vacations. I don’t try to force anything, though. The true words will only come when they’re ready — or when you’re ready for them. A lot of emotionally dishonest prose gets written when writers are on a tight deadline, or have a big contract to fill.

I have two who influenced my writing a lot so far. Novelist Robert Hellenga (“Snakewoman of Little Egypt”) often writes from the perspective of female narrators, and he gave me the courage to try that. Poet Amy Newman wrote a book called “Dear Editor” that inspired the query letter aspect of Shepherd. Both are written in the first person, which I find the most compelling way to tell a story.

Ernest Hemingway: Was there really nothing — nothing — left to say?

If the subject interested me, yes. When I was a pre-teen I was fascinated by horses, so I read all the Black Stallion novels. Then I was into Dungeons & Dragons and read all the fantasy I could get a hold of.

I was sixteen when I saw the TV series “Reilly: Ace of Spies” starring Sam Neill (remember that?). I immediately wrote a spy novel based loosely on that character and period. It was terrible but my mother encouraged me to keep writing, so I did.

OK promise not to laugh? I’m writing a short story about a man who’s the guardian for a vampire. He watches the home while the creature sleeps. He pays the bills, and arranges for an uninterrupted supply of blood. Now, after decades of service, the man is about to retire. This is also a fictional memoir which doubles as a letter to one person: the man who will succeed the guardian. In addition to the confessional element, this story is also a guidebook on how to care for a vampire. I’d like to turn this into a novel.

Well, Shepherd took me five years to write. Now that I’m getting the hang of it, I hope to have this one done in half that time.

I’m the only Dan Klefstad on Facebook and Twitter, to the best of my knowledge, so I’d begin there. I’m pretty quick with a reply. I’m also on YouTube: https://youtu.be/10cnd_tkZlI

Shepherd & the Professor is my first paperback release. But it started out as an e-novella called Dr. Shabbaz which has a similar plot told in third-person. After publishing it, I realized how bored I was with telling a story in “Third P” so I turned it into a fictional memoir. Then I added the query letter aspect. There: Now you know the most important part of my process — Revise, revise, revise!

Many thanks to Dan for joining me on my blog today 🙂 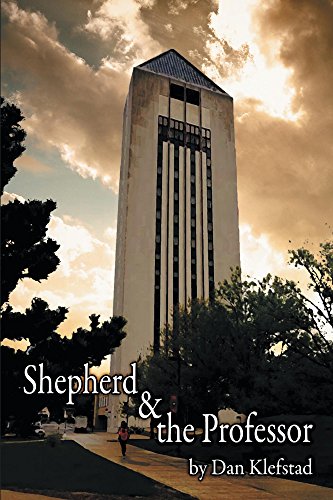 Most people take comfort knowing their family and friends will remember them after they die. For Susan Shepherd, “remembering” is bullshit. She wants an eternal shrine to her sacrifice: a book that never goes out of print.

Shepherd served her country in the Gulf War, got shot while serving her community as a cop, raised an ungrateful daughter by herself — and for what? A diagnosis of terminal cancer and she isn’t even fifty. If you were in her shoes, you might agree that nothing short of national perpetual acknowledgement will do.

She’s glad you feel that way; she just wrote a memoir and sent a flurry of query letters, hoping a publisher will memorialize her with a best-seller. After hitting Send, she waits not-at-all patiently for an editor to decide if her story will sell enough copies — that is, if her life really mattered.