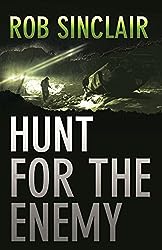 Well, what a finale!

I decided to read this straight after Rise Of The Enemy (The Enemy Series Book 2) as I needed to know what happened to JIA agent Carl Logan. Book 2 finished on a such a cliffhanger that I had no choice but to start book 3 immediately! I read Dance With The Enemy (Book 1) last year. All three books had me hooked, but I think Hunt For The Enemy (Book 3) has been my favourite. In my opinion the series has just got better with each book. Maybe it’s partly because we’re already familiar with a lot of the characters.

It’s hard to review a third book in a series as I don’t want to spoil anything for those who haven’t read the first two books yet, but I don’t think I’m giving anything away by telling you that Logan has been set up. Framed for a murder he didn’t commit he has had no choice but to go on the run and find the truth himself. He has no idea who’s set him up. His worst fear is that it’s the JIA, his own people who he’s dedicated his life to. He doesn’t know who he can trust anymore. But, with people dying all over the place it’s a race against time to sort it out once and for all.

I liked the back stories which helped to make more sense of the situation. They certainly shed light on a some of the dodgy characters and helped to bring everything together. There are also plenty of surprises along the way!

All in all, this book (and the whole series) is fast-paced and full of suspense. Very cleverly written. Carl Logan is a brilliant character. His story is fascinating. The mix of interesting characters and intriguing story lines keep you hooked from the start.

If you haven’t had the pleasure of reading this book (or any of the series) as yet, I would highly recommend that you do, but I would definitely recommend reading them in order.

With many thanks to the Author, Publisher and Netgalley for my Kindle copy.

You can buy a copy here: http://www.amazon.co.uk/Hunt-Enemy-gripping-international-suspense-ebook/dp/B01B744EV8/ref=asap_bc?ie=UTF8

You can read my review of Book 2 here: https://chataboutbooks.wordpress.com/2016/02/13/rise-of-the-enemy-the-enemy-series-book-2-by-rob-sinclair/

My short review of Book 1:

Carl Logan is a mysterious character, but this helps to make him one of the best agents the JIA has. He is sent to Paris on a private mission to rescue Modena, who had been elaborately kidnapped. Could this be his chance to seek his revenge on Selim at the same time?
When he crosses paths with FBI agent Grainger, the chemistry between them is immediate. He doesn’t trust easily, but something about her makes him trust her. He’s never felt like that about anyone. Could they solve this case together even though he’s used to being a lone wolf?
This is a good read, with a fast paced storyline and a good twist! I look forward to reading book 2.

Rob began writing in 2009 following a promise to his wife, an avid reader, that he could pen a ‘can’t put down’ thriller.

Rob’s first novel, Dance with the Enemy, was published in June 2014 and is the first in the Enemy Series following embattled intelligence agent Carl Logan. Rise of the Enemy, the second book in the series, was released in April 2015. The Enemy series has received widespread critical acclaim with many reviewers and readers having likened Rob’s work to authors at the very top of the genre, including Lee Child and Vince Flynn.

Rob worked for nearly 13 years for a global accounting firm after graduating from The University of Nottingham in 2002, specialising in forensic fraud investigations at both national and international levels. He now writes full time.

Originally from the North East of England, Rob has lived and worked in a number of fast paced cities, including New York, and is now settled in the West Midlands with his wife and young sons.