This awesome book is out today for you all to enjoy!

My review will follow, as part of the blog tour. 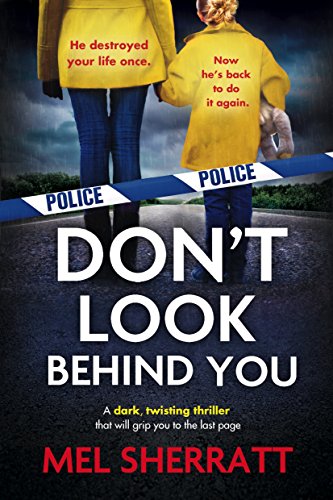 She got into bed but sleep didn’t come easily. Every creak in the house made her alert. She was waiting for him to come and get her.

The small city of Stockleigh is in shock as three women are brutally attacked within days of each other. Are they random acts of violence or is there a link between the victims? For Detective Eden Berrisford, it’s her most chilling case yet.

The investigation leads Eden to cross paths with Carla, a woman trying to rebuild her life after her marriage to a cruel and abusive man ended in unimaginable tragedy. Her husband Ryan was imprisoned for his crimes but, now he’s out and coming for her.

As Eden starts to close in on the attacker, she also puts herself in grave danger. Can she stop him before he strikes again? And can Carla, terrified for her life, save herself – before the past wreaks a terrible revenge?

An absolutely gripping and chilling police procedural which will hook fans of Angela Marsons and Rachel Abbott.

What readers are saying about Don’t Look Behind You:

‘The storyline weaves its way expertly towards a tense, thrilling and dramatic climax. Don’t Look Behind You is a definite 5-star read for me.’ Angela Marsons, author of Silent Scream and Blood Lines

‘Mel Sherratt has done it again! Loved this amazing book! This is a fabulous series and I adore Eden! A pacy, tense, thrilling read!’ Renita D’Silva, author of The Forgotten Daughter

’Don’t Look Behind You is a read full of twists and turns that will keep your heart pumping and your mind working overtime…I love Eden Berrisford and her team’ Caroline Mitchell, author of The Silent Twin

‘Wow. Yet again another gripping read by Mel featuring Detective Eden Berrisford. It was fab to learn more about this strong and inspiring character, and can’t wait for more in the series. The characters are so well written and presented that you’re sucked in to their stories and experience a real rollercoaster of emotions along with them.’ Vix Reading and Writing Blog 2016

‘Mel Sherratt has done it again. She’s kept me awake until I saw daylight coming through my window. There are vulnerable women within these pages and you tense up and your tummy knots up with each event that plays out. This is a breathtaking, twisty edge-of-your-seat read that when climaxes, really hits you for six. Read along with Sue

‘I loved that Eden was a strong female character who took no nonsense from anyone…I managed to read the whole thing in a matter of hours. This is a book which can definitely be described as “unputdownable”. Sal’s World of Books (5*)

‘The characters are deep and rounded, and some are very unsavoury. It got quite nail-biting in the end and I had to make myself breathe. I recommend this book 100%’ StefLoz Book Reviews

Praise for the Eden Berrisford series:

‘Wow. What can I say? If you are looking for nerve-wracking and nail biting tension then look no further…A nerve wrenching, nail biting 5 stars.’ Jen Med’s Book Reviews (5*)

‘The Girls Next Door is the perfect recipe for an exquisite crime thriller … Emotional, gritty and full of some OMFG twists, I dare you NOT to want to read this book!’ Crime Book Junkie

‘Mel Sherratt has a knack for writing accessible, likeable and fundamentally human characters,I raced through it and couldn’t put it down as I reached the final few chapters!’ Bibliophile Book Club