I am delighted to be today’s stop on Robin Roughley’s Keep You Near blog tour! 🙂 Many thanks to Helen Claire at Bloodhound Books for inviting me to join in. 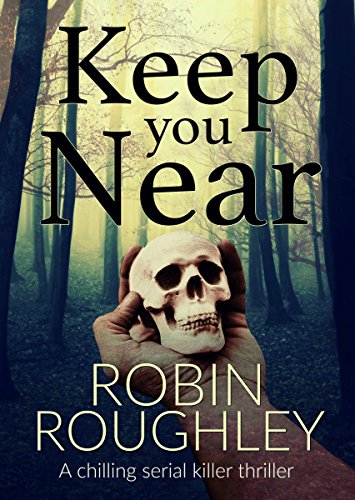 How far would you go to find your missing sister?

A normal day in the park turns into a nerve shredding nightmare for eleven-year-old Marnie Hammond when she find herself in a desperate chase to stop the ‘bad man,’ from abducting Abby.

Fifteen years later, Marnie is a Detective Sergeant but the memory of her missing sister still haunts her dreams.

When it becomes clear that someone is stalking the streets of Kirkhead DS Hammond has her hands full, and after remains are discovered buried in dense woodland, Marnie fears the worst. But this is only the start of a nightmare that will unearth more bones, more victims and the terror that Abby might be among the dead.

To stop the monster Marnie knows she must break the rules, but when the twisted killer turns his attention on her it becomes a fight not only for the truth but for her sanity and her survival.

Can Marnie catch the murderer and solve her sister’s disappearance?

Robin Roughly is the best-selling author of the DS Lasser series. This is the first book in his thrilling new Marnie Hammond Series.

The boy was tall for his age, though not quite tall enough. He sat naked and shivering on the bonehard wooden bench, the soles of his scarred feet hovered two inches from the pitted oak floorboards. The back of his whipped legs throbbed with pain as the heavy stack of leather-bound books, balanced across his thighs, bore down. Despite the mounting pain, he didn’t move – the terror wouldn’t allow it. He had no idea how long he had sat, unmoving, watching as the shadows lengthened and the timeworn, grimy room darkened. Glancing left, he peered into the gloom; he could just make out the lumpy shapes of old furniture covered by grey dustsheets. An ancient hat stand, home to a multitude of mummified flies trapped in the fragile covering of cobwebs, stood sentinel in the corner. High above, the occasional gentle coo of pigeons, settling on old wooden beams, drifted out into the trembling air.

He felt a trickle of blood seep down the back of his right leg, feverishly hot against his goosebumped flesh. Despite eyes screwed shut, the tears still slid free and he gritted his teeth, hating this manifestation of fear.

Tentatively, he placed his hands flat on the bench, palms sweating, as he attempted to ease his weight from the plank of wood but his quivering muscles refused to bear the load. The books started to slide and he grabbed them before they slipped to the floor, his heart hammering, the pain making him gasp.

Beyond the high, fly-blown window, the last of the light flared and died; the boy lowered his head in despair as the shadows closed in around him.

Time stretched out, he tried to block out the agony, tried to think of something to break the cycle but all he could visualise was the girl, the smile playing around her lips. Staring at him with sly amusement in her eyes as she nudged the bone china plate from the kitchen table, slowly, inch by hypnotic inch.

The boy had watched –eyes wide in terror –as it fell to the flagged floor and shattered; before he could move she had been running for the door, scream rising, curly hair bouncing, she dashed out into the garden in floods of fake tears.

He had been on his hands and knees desperately trying to gather up the shards when the shadowed figure had stalked past the kitchen window and into the room.

Now he sat and shivered as the pain increased, a splodge of pigeon shit landed on his right foot and he watched it dribble to the tip of his big toe before dripping to the floor. A milky globule amongst the patterning of fresh blood – his blood.

When he heard heavy footfalls on the stairs, the boy snapped his head up, watching the shadow move back and forth, caught by the sliver of light at the foot of the door.

As the key rattled in the lock, he fought back the urge to scream, knowing it would be a hopeless reflex action, one guaranteed to bring further punishment, feeding his tormentor’s malevolent spirit.

Inexorably, the door creaked open and light flooded into the room, forcing the boy to screw his eyes closed against the onslaught.

Once closed, the dread of opening them again ate away at his quivering defences.

Footsteps, slow and measured, thudded over floorboards twisted with age.

The boy tried to block out the noise but his senses seemed attuned to every sound and smell, the stale air that drifted into the room, the birds above trilling in alarm and – finally – the hot, sour breath on his sweating face.

Every second that slipped into infinity warped his young mind. He felt trapped in a terrible limbo, both frightened and yet desperate to see what was in front of him.

Cracking open one eye, he hitched in a sharp breath when he saw the familiar figure looming over him.

‘Have you seen the error of your ways?’ The voice was low and deep, little more than a rumble that seemed to set off a vibration of terror in the still air.

The boy tried desperately to formulate an answer but the terror had taken his voice, leaving him mute with fear.

Half a second later, the side of his face exploded in pain as the shadow lashed out, the back of his huge, calloused hand smashed into his cheek; the boy clattered from the blood-stained bench, the books fell with a heavy thump sending up small eddies of dust.

Pain roared through mind and body, countless hours sitting unmoving with the weight of the books bearing down had left his muscles locked tight.

When he tried to draw his legs up, the agony erupted until he could bear it no longer. He lay, naked and shuddering, the scream trapped behind gritted teeth, the side of his head flaring redhot, his ears ringing with pain.

Robin Roughley lives in Wigan in the the North West of England (God’s coal bunker) though he hopes to one day be released for good behaviour.
He is the author of eleven crime/thriller novels featuring DS Lasser. The novels are set between the run down streets of a northern town and the beautiful yet desolate west Pennine moors.
If you love your crime fiction crammed with square jawed heroes driving flash cars and glorious women who shimmer with inner light, then the DS Lasser novels are probably not for you.
However, if you prefer your characters to be flawed, with a sprinkling of dandruff and old acne scars, the plots to be laced with dark humour, then give them a try.
1 The Needle House
2 The Way that it Falls
3 Tethered to the Dead.
4 Twisted
5 More Equal than Others
6 Vanished Beneath
7 Riven
8 Bad Self
9 Crave
10 Moment Back

Don’t forget to catch up with, and follow, the rest of the blog tour…..