Today I have the pleasure of sharing a lovely extract from Rosie Millard’s The Brazilian, as well as giving you the opportunity to win a copy for yourself! 🙂

Many thanks to Imogen Harris at Legend Press.

Want to win yourself a hard copy? (UK only I’m afraid due to postage costs) All you need to do is comment on this post, by Friday 1st September, and I’ll pick a winner at random! 🙂

If you’re not lucky enough to win then why not buy yourself a copy….. 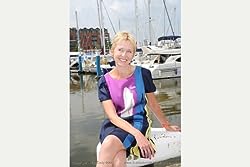 I am a journalist and author. Between 1994-2004, I was the BBC’s Arts Correspondent during which time the Tate Modern opened. This provoked my first book The Tastemakers (T&H, 2001) which analysed why contemporary art became so fashionable in the Nineties.

After the BBC I wrote for The Sunday Times and was Arts Editor of the New Statesman. I’m now a columnist for the Independent and write for lots of other papers and magazines. In 2009 my husband and I and our four kids went around the world on a crazy project to visit the French overseas departments, which resulted in 6 TV documentaries for the Travel Channel and a book, Bonnes Vacances (Summersdale, 2011), a comic account of how to go around the world without leaving France.

My first novel The Square was published in 2015; its a comic romp set in a London garden square and came out of a fiction writing course run by University of East Anglia. When I’m not writing, I’m usually working in Hull. I’m chair of Hull UK City of Culture 2017 which is going to be one amazing year.