I am thrilled to be joining in with Alice May’s Accidental Damage blog tour! 🙂

Many thanks to Emma Mitchell for inviting me to take part.

I have Accidental Damage on my review list. Alice May sent me a beautiful signed paperback copy. I promise to read and review as soon as I can, Alice.

In the meantime I have the pleasure of sharing an extract with you. Mine is extract 2, so do make sure you read extract 1 over at Rae Reads.

Definition: a member of a primitive or uncivilised people.

The next morning, having fallen into bed incredibly late and then risen insanely early in order to continue painting, I was contentedly immersed in shades of sap green. I became aware of a rhythmic crunching sound coming from behind me. Gradually surfacing from a cocoon of colour, canvas and comforting brushstrokes I turned and focused on the figure looming in the doorway. Systematically spooning milk and cereal from a bowl into his face, my older son was observing me with interest.

He is the third in the series of small people that my Beloved Husband and I had created several years previously. At 16 he is getting surprisingly tall, which might have something to do with the fact that he is always eating.

Currently sporting pyjama bottoms and nothing else, he obviously hasn’t stopped to get dressed before initiating his primary raid on the cereal cupboard this morning. I resisted the urge to tell him to go and put a top on and made a mental note to turn the heating down. It’s mid-January for goodness sake! If people feel comfortable walking round in their scanties in the middle of winter then we obviously have the thermostat set far too high.

Now, it should be remembered that this son of ours is not someone who talks very much. This is potentially related to the fact that he is always mid-way through a snack. (I would like to believe that my numerous nags concerning not talking with your mouth full were inwardly digested, but I rather think not.) It’s probably got more to do with the fact that I created two rather gobby older sisters for him before I got around to the job of manufacturing boys.

Don’t misunderstand me, even though he is known affectionately to the family as Quiet, he can definitely talk. He just doesn’t. Not very often, and when he does it’s generally so brief you can easily miss it if you aren’t concentrating, so I simply looked at him and waited patiently in case any utterances were imminently forthcoming.

He munched thoughtfully and then nodded slowly.

Then he chomped some more, while a kamikaze droplet of milk made its way down his chin and quivered momentarily before launching itself towards the floor.

Yet still there was no obviously impending comment. I got bored of waiting and raised an inquisitive eye at him, effectively inviting him to either speak or naff off. (Two could play at being uncommunicative.)

Getting the hint he finally swallowed and said, ‘You’re painting!’

Such a bright boy!! It’s no wonder that Beloved Husband and I are so proud of him!

Usually, when Quiet finally does express himself I generally think it is worth listening to, as so much thought goes into it. Unlike most of the population he usually only speaks when he has something useful to say.

Still waters run deep and all that.

On this occasion, however, I realised that I might have to lower my expectations, so I nodded and turned back to my canvas.

“Good,” he surprised me by continuing. I had thought I’d had my quota of words from him for the day.

“Really?” I enquired, deliberately not looking at him in case he stopped interacting altogether, “and why’s that?”

This should be interesting.

Silence! I could almost hear him shrugging his shoulders – a favourite method of communication for most teenage boys.

He sighed heavily and I looked round meeting his eyes. They were sparkling with supressed humour and I could tell that he was calculating whether or not he would get away with his next statement.

He tipped his head to one side and obviously decided to go for it.

“You’re a lot less grumpy when you paint.” He gave me a wicked grin and ambled off to find someone more entertaining to torment with his silent presence.

I returned to my soothing sap green canvas.

You will find extract 3 over at Kristin’s Novel Café tomorrow. Don’t miss it! 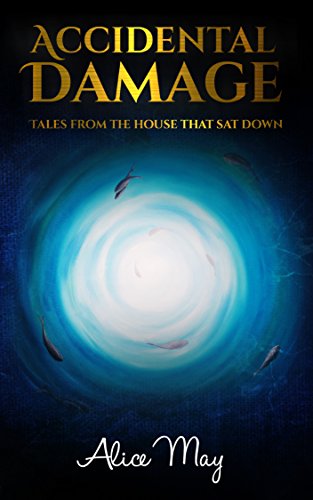 If you think the normal school run on a Monday is entertaining you should try doing it from a tent in your back garden surrounded by the jumbled up contents of your entire home. It is vastly more diverting.

Our heroine has survived the sudden collapse of her home – or has she?

Certain events two and a half years ago led her to deliberately destroy an important piece of herself, hiding away all remaining evidence that it ever existed. What happens when she decides to go looking for it?

Does she really deserve to be whole again?

Inspired by a true story, this is an account of one woman’s secret guilt and her journey in search of forgiveness!

Alice May is a multi-tasking mother with four not-so-small children and she is fortunate enough to be married to (probably) the most patient man on the planet. They live in, what used to be, a ramshackle old cottage in the country. Her conservatory is always festooned with wet washing and her kitchen full of cake.

Following many years exhibiting as a mixed media artist, Alice decided that 2016 was the year she would write her first fictional novel. ‘Accidental Damage – Tales from the house that sat down’ simply wouldn’t leave her alone until it was written.