I am delighted to be joining in with Anne Goodwin’s Underneath blog tour! 🙂

I’m a former clinical psychologist who has found her niche as a book blogger and author of over seventy published short stories and two novels in the genre of literary-commercial / accessible literary fiction. I’m interested in themes of secrets, identity, mental health and how the past influences the present, but mostly I aim to write fiction that people will want to read. My first novel, Sugar and Snails, about a woman who has kept her past identity secret for thirty years was shortlisted for the Polari First Book Prize. My second, Underneath, about a man who thinks he can resolve a relationship crisis by keeping a woman captive in a cellar, is published next week.

Ideas often come to me while I’m out walking, or are sparked by things I’ve read. For example, Sugar and Snails partly came from reading a newspaper report about an eminent psychologist who died of anorexia without any of her friends or family where she had a problem (although my character, Diana, self-harms through cutting). Underneath began with an image of an unhappy little boy sitting at the bottom of a staircase which then merged with my musings about how a baby might experience being left alone to cry. Needless to say, there’s a lot more head work involved in transferring these ideas into a readable story.

Generally, I think of them mostly as alternative versions of myself. Although, now I think of it there is a very minor character in Underneath who’s a bit of a hero for my narrator and is loosely based on my husband.

Other than avoiding naming characters after friends and family, and trying to match them with the period and culture in which they were born, I’m not sure. Sometimes I’ve had to change a name that wasn’t working for that character but often their name is part of a process of getting to know them. I do worry about the possibility of inadvertently repeating a particular name and saddling a new character with the baggage of the previous one.

Ah, if only I could! It seems to me that my fiction evolves through the interaction of character, language and situation through multiple drafts until I can carve out some kind of narrative arc. Or, more prosaically, it’s a matter of repeatedly writing and rewriting and writing again until it gets to look like something some people might even pay to read. With every draft I get deeper into the character and the emotional climate of the story, which I find extremely satisfying.

Of my top 5, I’m proud to say I’ve been taught by Jane Rogers and meet up with Alison Moore now and then as we’re based in the same region.

As she’s been dead a few years it’s never going to happen, but I’d like to chat with Carol Shields about the extent to which her final novel, Unless, reflected her own experiences of being undermined as a writer by gender stereotypes, and to reassure her that her fans still appreciate her storytelling prowess.

Absolutely! With five children our small house was fairly crowded and I suspect that a period of deafness I had the age of around eight or nine was psychosomatic in origin to ensure me peace and quiet to absorb myself in a book.

I’ve been secretly scribbling since I was a young child, but have been writing seriously – by which I mean editing in response to feedback – for about fifteen years. I had my first short fiction publication ten years ago and my first novel almost two years ago.

Fascinating question! Sometimes I might not be happy with an ending because it either ties things up too neatly or leaves too much unresolved. (I imagine many readers feel the same, but we probably differ in how much ambiguity we like.) I love it when the ending is unexpected, but nevertheless seems true to the story. My most memorable disappointing ending was in novel by Jonathan Coe (it might have been The Terrible Privacy of Maxwell Sim, but I couldn’t swear to it) where we’ve followed a rather poignantly lonely character for several hours only to be served up a post-modern copout in which the author intrudes into his own fiction to show it was all made up. I knew it was made up! But I didn’t want my willing suspension of disbelief to be thrown back in my face!

Thousands, even Jonathan Coe’s! There are lots of novels I admire but could never have written because the themes don’t resonate with my own life, but of those that do – although I’ve never experienced anything like the hostage situation that gives it its structure – I’ll choose Ann Patchett’s Bel Canto.

Another intriguing question that made me think! I decided to invite Jane Eyre for a walk on the moors finishing at North Lees Hall, thought to be the inspiration for Thornfield in Charlotte Brontë’s novel, on one of the Heritage Days when it’s open to the public. Over Diane’s delicious home baking I’d try to persuade Jane that, regardless of his marital status, she’s far too good for Mr Rochester and, besides, there’s no shame in being a teacher in a school for the mill workers’ offspring. Depending on how she took that, I might ask if she’d like to hear his “mad” wife’s side of the story through Jean Rhys’s novel, The Wide Sargasso Sea.

An Eton mess of disjointed scenes about a brother and sister separated for over fifty years while she’s in a mental hospital which I hope will eventually come together well enough to be my third novel. I’m also assembling a collection of short stories around the theme of identity to fill the gap before my next novel’s ready for publication.

My second novel, Underneath, is published on 25th May. Here’s the blurb:

He never intended to be a jailer …

After years of travelling, responsible to no-one but himself, Steve has resolved to settle down. He gets a job, buys a house and persuades Liesel to move in with him.

Life’s perfect, until Liesel delivers her ultimatum: if he won’t agree to start a family, she’ll have to leave. He can’t bear to lose her, but how can he face the prospect of fatherhood when he has no idea what being a father means? If he could somehow make her stay, he wouldn’t have to choose … and it would be a shame not to make use of the cellar.

Will this be the solution to his problems, or the catalyst for his own unravelling?

Lovely question: what do I generally do (because of course I’m such an old hand at this malarkey)? For short stories, I do the admin stuff of linking it to my website and promoting on social media. For my first novel, I enjoyed the online reviews that were coming in and continued with the preparations for my launch party. I don’t know yet what I’ll do for Underneath, but probably just mark it quietly at home with my husband while getting on with ordinary things. The big celebration is at my launch party in Nottingham on 10th June.

My blog tour is running until 10th June, with loads more opportunities to find out about me and my writing.

Thank you for taking the time to answer my questions, Anne 🙂 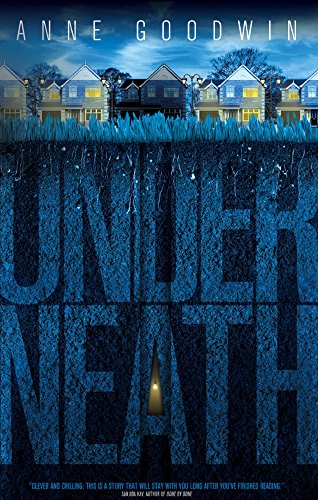 A dark and disturbing tale of a man who appears ordinary on the surface, but is deeply damaged. Clever and chilling; [Underneath] is a story that will stay with you long after you’ve finished reading.
– Sanjida Kay, author of Bone by Bone

[Underneath] is a compelling, insightful and brave novel of doomed, twisted romance driven by a sustained and unsettling voice.
– Ashley Stokes, author of The Syllabus of Errors

This secret tantalisingly grips the reader, gradually being pieced together bit by bit, so intrinsically and poignantly mapped out that I truly cannot praise this novel highly enough.
– Isabelle on The Contemporary Small Press

Fiction delivered by a writer who knows not only how to craft her words but also what those words should be communicating.
– Dr Suzanne Conboy-Hill in The Psychologist

I loved this book. Sugar and Snails is beautifully written and a truly impressive debut by Anne Goodwin. It reminded me a little of Claire Messud’s The Woman Upstairs. The character of Di, at first frustrating, grows more endearing as you begin to understand her. Her friend Venus and lover Simon are well-drawn; there as foils to Di’s story. A beautiful and gripping read.
– Fleur Smithwick, author of How to make a Friend

Sugar and Snails is a brave and bold emotional roller-coaster of a read. Anne Goodwin’s prose is at once sensitive, invigorating and inspired. I was hooked from the start and in bits by the end. Very much to be recommended.
– Rebecca Root, actor and voice teacher