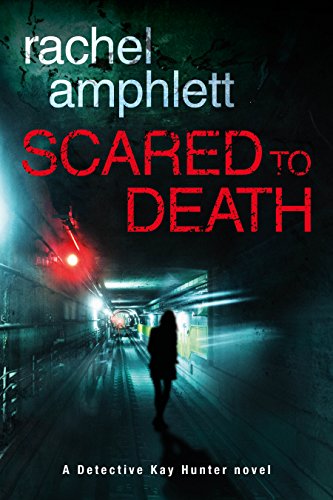 “If you want to see your daughter alive again, listen carefully.”

When the body of a snatched schoolgirl is found in an abandoned biosciences building, the case is first treated as a kidnapping gone wrong.

But Detective Kay Hunter isn’t convinced, especially when a man is found dead with the ransom money still in his possession.

When a second schoolgirl is taken, Kay’s worst fears are realised.

With her career in jeopardy and desperate to conceal a disturbing secret, Kay’s hunt for the killer becomes a race against time before he claims another life.

For the killer, the game has only just begun…

Well, I recently joined in with Rachel Amphlett’s blog tour for Book 3 in this series, so I thought it was about time I bumped Book 1 to the top of my list and I am so glad I did! Why have I never read a book by Rachel Amphlett before now??

Scared to Death is a brilliant start to a new series. I warmed to Detective Kay Hunter immediately. There’s a back story there that hasn’t been fully explained as yet, which I find very intriguing. She seems to be up against her fair share of negativity at work, via certain colleagues, although others very much seem to have her back. We also get an insight in to her personal life and her relationship with her partner, which I like as it shows a softer side to an otherwise professional character.

Kay and her team are faced with the difficult task of investigating the death of a local 17 year old girl who had been kidnapped whilst her parents were on a business trip. A ransom had been demanded, her parents had paid and not reported the kidnapping as requested, as they believed their daughter would be spared if they cooperated. When they arrive at her location, however, their worst fears are realised. Every parents worst nightmare. The way this poor girl met her end is nothing short of horrific and these parts of the story are very upsetting. Her killer is a very disturbed character.

When a second girl is kidnapped, Kay and her colleagues race against time to figure out where she is being kept before it’s too late and this time it’s personal. There is a very sick game being played which makes this a very dark crime thriller. Just brilliant!

Scared To Death is a very cleverly written police procedural with a tense and fast-paced storyline. There are many plot twists and shocks along the way. I was totally gripped and I’m very much looking forward to reading the rest of the series.

If you haven’t already, I highly recommend you add this to your reading list. It’s definitely one I would happily buy as a gift for family and friends.

Many thanks to Rachel Amphlett for my review copy. It’s very much appreciated, as always.

(Please note this is an affiliate link)

Rachel Amphlett is the bestselling author of the Dan Taylor espionage novels and the popular new Detective Kay Hunter series, as well as a number of standalone crime thrillers.

Originally from the UK and currently based in Brisbane, Australia, Rachel’s novels appeal to a worldwide audience, and have been compared to Lee Child, James Patterson, and Chris Chibnall.

She is a member of International Thriller Writers and the Crime Writers Association, with the Italian foreign rights for her debut novel, White Gold, being sold to Fanucci Editore’s TIMECrime imprint in 2014, and the first four books in the Dan Taylor espionage series contracted to Germany’s Luzifer Verlag in 2017.