I am thrilled to be joining in with Kerry Wilkinson’s Two Sisters blog tour! 🙂

Mine is one of the last two posts, sharing my day with the very lovely Sarah at By The Letter Book Reviews. Make sure you catch up with the others posts, if you haven’t already….. 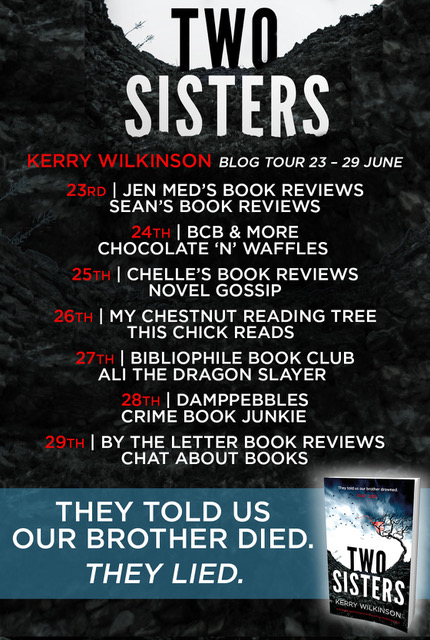 Thanks to Kim Nash, at Bookouture , for the opportunity to take part.

They told us he had been missing for nearly two days, that he probably drowned. They told us a lie.

Megan was ten years old when her older brother, Zac, went missing among the cliffs, caves and beaches that surround the small seaside town of Whitecliff.

A decade later and a car crash has claimed the lives of her parents.

Megan and her younger sister Chloe return to Whitecliff one summer for the first time since their brother’s disappearance. Megan says it’s to get her parents’ affairs in order. There are boxes to pack, junk to clear, a rundown cottage to sell. But that’s not the real reason.

Megan has come to confront her family’s past after receiving a postcard on the day of her parents’ funeral. It had a photograph of Whitecliff on the front and a single letter on the back.

A totally gripping psychological thriller that will have fans of Louise Jensen, Sue Fortin and The Silent Child absolutely hooked.

This is the first book I’ve read by Kerry Wilkinson, but I can guarantee it won’t be the last.

Two Sisters follows the story of Megan and Chloe who have returned to Whitecliff, to a cottage they now own since the sudden death of their parents in a car crash. They weren’t particularly close to their parents, having been sent away to boarding school. They don’t know each other that well, as they always went to different schools, but they are all each other has now and Megan (being the oldest) is very protective of Chloe. Their brother went missing 10 years previously and is presumed dead, but they want answers. Or, at least, Megan wants answers and she knows the people of Whitecliff must know something. However, their presence in the village and the questions Megan asks of the locals just seems to unnerve everyone. Why is everyone acting like they’ve forgotten Zak? 10 years is a long time, but surely such a small community would remember such a tragedy.

Megan isn’t the most likeable of characters. She doesn’t go out of her way to make friends and/or be particularly nice to people. She’s very blunt and a bit standoffish, but she has problems. She has an eating disorder. She is very aware of how she is, but can do nothing to stop her behaviour. She seems to relish the control she has over food. She doesn’t seem to see much pleasure in life. I did warm to her though.

Chloe is the complete opposite. A typically happy-go-lucky teenager, happy to make the most of a week at the beach. She’s less inclined to push people about Zak. She seems to just want to move on.

The people of Whitecliff seem a bit dodgy in general, with the exception of a few, including Arthur. People obviously know more than they’re letting on and Megan isn’t prepared to let it drop and I found myself as determined as her to find out what happened. I could totally understand her need for the truth as I couldn’t cope with the not knowing either.

The truth is just shocking! The end left me totally gobsmacked! Brilliant!

If you like a good psychological thriller with an interesting mix of characters, and plenty of suspense, then you will love this book.

Many thanks, as always, to Bookouture for my auto-approval status on Netgalley and to Kim Nash for the opportunity to take part in this blog tour.

Kerry Wilkinson is from the English county of Somerset but has spent far too long living in the north. It’s there that he’s picked up possibly made-up regional words like ‘barm’ and ‘ginnel’. He pretends to know what they mean.

He’s also been busy since turning thirty: his Jessica Daniel crime series has sold more than a million copies in the UK; he has written a fantasy-adventure trilogy for young adults; a second crime series featuring private investigator Andrew Hunter and the standalone thriller, Down Among The Dead Men.