Many thanks to Rachel for the opportunity to join in with Linda Ferreri’s The Matter Of The Crown blog tour!

I had to go nowhere because it all fell right into my life out of the clear blue sky, as they say. I came to know the Crown of the Andes over 25 yeas ago. The rest is history. Some of that, restyled, is in the previous novel entitled One Sacred Crown.

I worry about the names of my characters quite a lot and have to change them as the characters morph during the writing. I just changed one two days ago because his ethnicity became important to the story. I work and work at it until I am sure the name fits. It has to sound good, not only read well.

Happily. I think at night and in the wee hours of the morning when the characters talk to me. They call me, literally. I write in the morning. I know the general plot when I start but I do not have a tidy outline or adhere to one. I follow my characters in the adventure. The most difficult moments are those in which I have to decide whether the timing is right for something dramatic. Are we (the readers and I) ready yet for this or that to spring on us?

The keyboard of my Macintosh computer and I are one. My thoughts just flow right through my fingers.

Of course I would like to meet J. K. Rowling and ask her whether she really wrote all of that in a café. I understand that! I love writing in public where people bring me coffee and I don’t have to listen to the telephone or any distractions.

Yes, but I was more of a visualizer and imaginer, I think.

Early. I won a writing contest when I was very young and produced a short essay on the importance of Thomas Alva Edison. I think I was born talking and typing.

Honestly, I don’t know about that. I reflect on cases in which there have been multiple endings, e.g. some of Hitchcock’s films. I have never liked the ending of Gone with the Wind but I don’t know what else I would do with it.

I guess that I don’t have that much ego. I do admire great writers tremendously. I think often about the days when they did it all with a pen and ink. I could not possibly write that slowly. I am in their awe, truly.

So many lives, by accident

I have always wanted to know how Miss Marple just helped herself into the role of detective over and over and over again. I mean, she pushed into each crime so gently. My characters are thrust in as often as not. It’s an interesting question for thriller writers like me with the volunteer protagonist. So I would take Miss Marple out for coffee, right here in Le Marche to one of my absolutely favorite places Locanda Le Logge in Urbisaglia, for a big chat on that topic.

Right now, I am writing another thriller involving the two protagonists in The Matte of the Crown. It, too, takes place in the United States and in Le Marche, Italy. It, too, involves an art crime and a famous work of art. I am more than halfway into it and deeply involved in it. The characters are depriving me enough sleep some nights. They talk to me and demand attention at some of the most inconvenient times! The back story is challenging in this one.

Not yet but soon. The next thriller novel is moving along swiftly here.

Talk too much about myself to people who marvel and wonder about me, e.g. the lovely ladies behind the counter here at my local supermarket who wonder why I don’t publish these books in Italian so they can read them.

TheMatteroftheCrown.com and the website I will put up as soon as the new book is ready.

Yes. This story belongs on the silver screen because it is astoundingly visual. The Crown of the Andes itself (Gallery 357 in The Metropolitan Museum of Art) is astounding in its beauty and splendor. The hill towns of Le Marche are gorgeous and scenic. The story is so juicy and the history so rich. It just belongs there, and that’s that. Everybody who reads it says so and I certainly think that.

I thank all of you for your blogging. It’s a huge help to readers out there. There are so many good books to read but we all appreciate a lead to the right one.

Thank you for taking the time to answer my questions, Linda 🙂

The Matter of the Crown

The Crown of the Andes, one of the world’s most precious and beautiful sacred objects, has been stolen right off the stage at Satterling’s Auction House in New York City. Five pounds of magnificent baroque gold that ransomed the Inca Ruler Atahaulpa, and hundreds of perfect Colombian emeralds, all gone without a trace! Will this legendary treasure be destroyed for its gold and emeralds? One woman is dead and another one in hot pursuit. 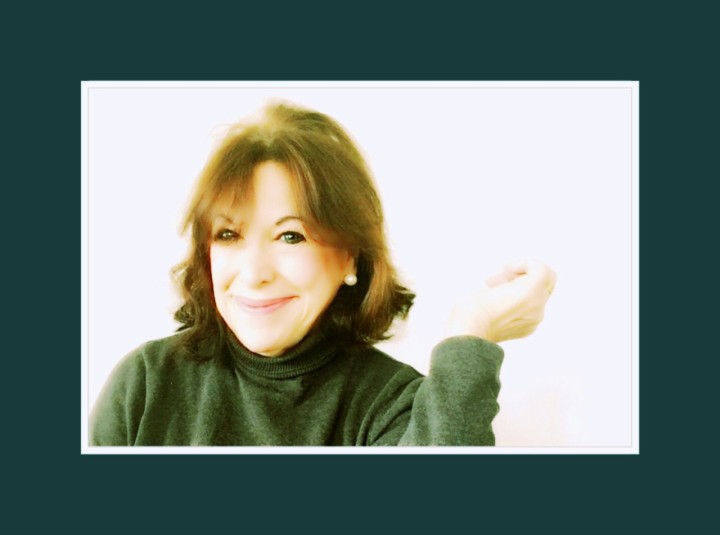 Linda Ferreri is a well-known art lawyer and author. Her books include novels about the Crown of the Anes, a novella entitled The King of UNINI, and whimsical hand-illustrated iBooks. She is known, also, for her drawings. She divides her time between Italy and the United States, and lectures widely around the world about art and history. Her next novel is in progress.