I have a something a little bit different for you today.

I’m sure I’m not the only parent who has struggled to interest their child in reading for pleasure. My daughter loves to read, but I still haven’t convinced my gamer son, who is now almost 18, that reading is NOT boring!

Boys’ reading-comprehension skills are dropping faster than girls’. Here’s what we can do about it:

Every boy and girl is one captivating book away from becoming a reader. So what are the books that enthrall boys? Many boys enjoy action-packed stories with a male main character. On his Guys Read website, author Jon Scieszka suggests that we “let boys know that nonfiction reading is reading. Magazines, newspapers, websites, biographies, science books, comic books, graphic novels are all reading material.”

Start by building on what your son likes and let him choose what he wants to read. Here are some ideas:

For video gamers: Diary of a Minecraft Zombie, Ender’s Game, and Ready Player One are good choices. Nonfiction books like Game On!, which describes the latest video games and how to win them, and the Guinness World Records 2017 Gamer’s Edition can also appeal to the gamer in your life.

For preteen boys who like to laugh: Try the Diary of a Wimpy Kid series, the Big Nate series, Roald Dahl books, Calvin and Hobbes, and David Walliams’s books like the Demon Dentist. Preteens also like joke books such as Jokelopedia. (Brace yourself for the impending onslaught of “why did the chicken cross the road” jokes.) Older teens may chuckle when reading The Hitchhiker’s Guide to the Galaxy, Terry Pratchett’s Discworld books, and Good Omens. David Sedaris’s books and Dave Barry’s columns are hilarious.

For fans of Marvel comics and Star Wars: Does your son enjoy the movies based on Marvel comics, like X-Men? If so, try graphic novels with lots of action such as Batman: The Killing Joke or a paperback like X-Men Days of Future Past. Eighth graders and older teens may enjoy Brandon Sanderson’s unconventional superhero Steelheart trilogy. For Star Wars fans, check out visual dictionaries of the characters and planets as well as Timothy Zahn’s books like Star Wars: Thrawn and Michael Stackpoles’s Star Wars: X-Wing series.

For those that enjoy fantasy and adventure: Try Harry Potter; anything by Rick Riordan; the Leviathan trilogy, by Scott Westerfeld; the Ranger’s Apprentice series; and Tolkien’s The Lord of the Rings.

For action and thriller fans: Check out the Alex Rider series, by Anthony Horowitz; the Maze Runner series; the Michael Vey series, by Richard Paul Evans; and Cherub: The Recruit, by Robert Muchamore.

For boys interested in history: Get Steve Sheinkin’s books like Bomb: The Race to Build—and Steal—the World’s Most Dangerous Weapon; the young adult version of Unbroken; or Chasing Lincoln’s Killer, by James Swanson. Preteens enjoy the I Survived series, by Lauren Tarshis; the Horrible History series, by Terry Deary; and the Who Was? biography series.

In addition to enjoying books that reflect their interests, boys respond positively to male reading models. The British Parliament’s Boys’ Reading Commission stated in its 2012 report that in order to narrow the reading gender gap, every boy should have weekly support from a male reading model.

Author Jim Trelease agrees and points out that many dads focus on developing their sons’ athletic abilities rather than their reading skills. Fathers and sons spend hours together at the gym or soccer fields, but how about Dad also takes his son to the library or bookstore? How about they sit on the couch and read their respective books and magazines? While we all like to dream, it’s highly unlikely that our kids will play professional sports or receive a Nike contract. But they will need to read and write well to succeed in the workplace.

It’s not just dads who can mentor boys. Grandpa can read a few pages of the book his grandson is currently reading and talk to him about it. Or an older male cousin can read an article with your son. If Dad (or Grandpa or another reading mentor) lives far away or travels extensively, he can text, e-mail, and Skype about books and send links to articles.

Thanks so much for taking the time to write this encouraging guest post for Chat About Books, Faye. I’ve failed with my son, so far, but I still hope he will become a reader in his adult life.

Author Kaye Newton loves to share valuable tips on how to get kids to put down their smartphones and pick up a book. Kaye spent over a year researching expert advice about promoting reading and then testing it on her three screen-loving children. Find out more about the result, How to Get Your Screen-Loving Kids to Read Books for Pleasure, and her other award-winning book at kayenewton.com. (http://kayenewton.com) 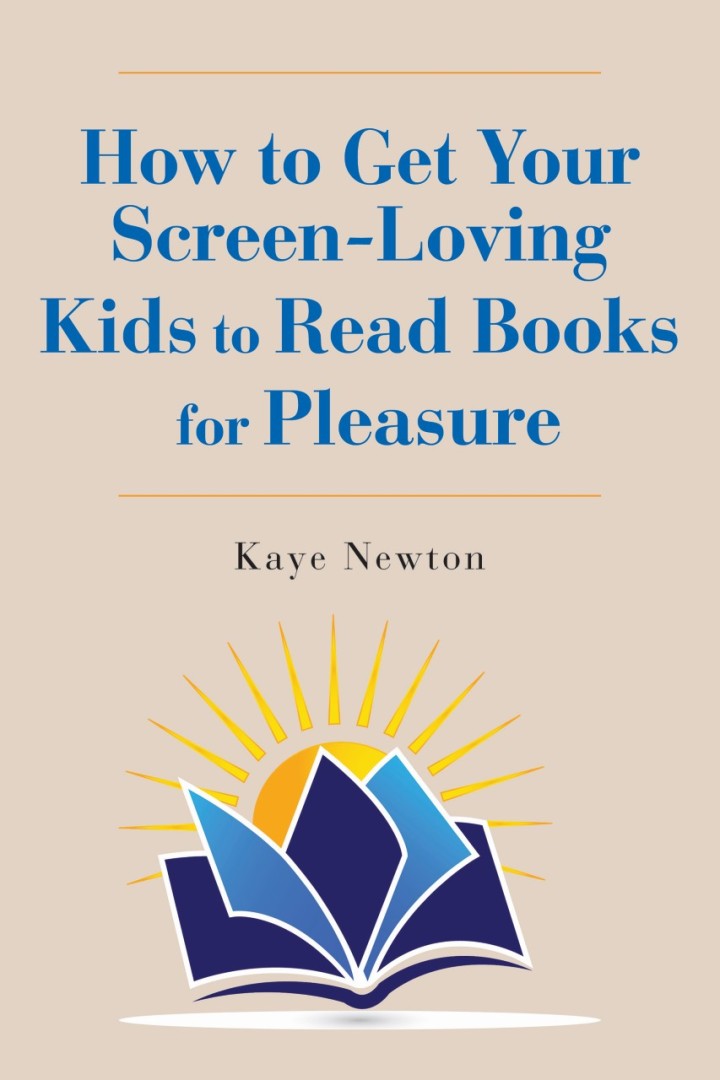 What are your thoughts on this subject?

4 thoughts on “Boys and reading #GuestPost by Kaye Newton @kayenewtonbooks”