I have something a little bit different for you again today. 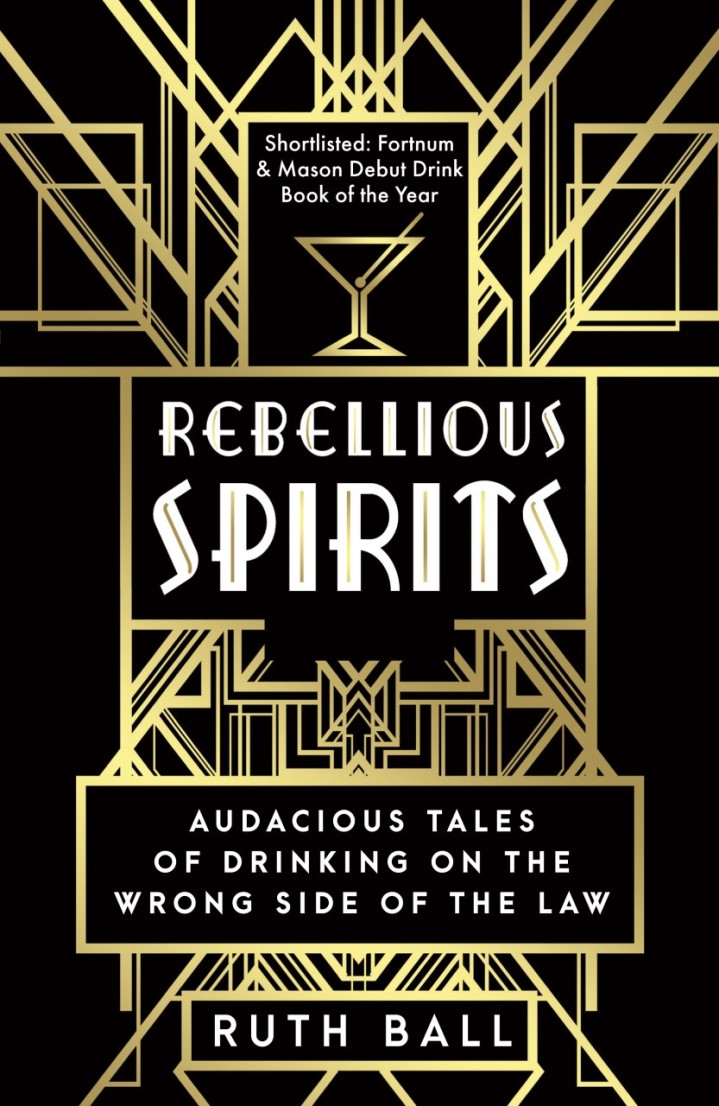 Audacious Tales of Drinking on the Wrong Side of the Law

From the first Malt Laws in Scotland and the restriction on gin in Hogarth’s London to the bootleggers of the Second World War and the modern speakeasy, Ruth Ball charts our enduring relationship with illicit alcohol.

A former bartender and founder of the bespoke liqueur company, Alchemist Dreams, Ruth’s flair with spirits can be seen in the many recipes, both traditional and modern, that pepper the pages of Rebellious Spirits, inviting you to drink along as you discover the true taste of the past.

“Gallops through the centuries with entertaining stories of smugglers, bootleggers, speakeasies and a host of other ne’er-do-wells devoted to avoiding the taxman and liquor laws. Historical recipes are woven through this refreshing read” Olive Magazine

“An engaging, witty and informative read for anyone interested in the colourful and exciting history of booze” GinFestival.com

“I love any book that teaches me new information or recipes. To find one that does so in such pleasurable and amusing way is a joy. You could treat Rebellious Spirits like a reference book and dip in and out of it from time to time but I defy you to put it down once you start reading it.” Comfortably Hungry’s blog.

With much to prove to his new subjects, William of Orange took the traditional approach of English kings: he declared war on France. His first act of aggression was to lay a cripplingly heavy tax on their main export: brandy. Britain had enjoyed a time of freedom and plenty since the demise of Oliver Cromwell and the end of the Commonwealth. Crops were good, food was cheap, towns were booming – and visiting brandy shops was becoming a popular pastime. Cutting off the supply of brandy was unlikely to be a popular move. Luckily, there was an alternative: cheap spirits made from British grain, which was growing in such plenty that farmers were in need of a new market.

These native spirits were usually used to make gin, the perfect spirit for the Dutch king to promote; and so gin was to become the new national spirit of England. Steps were taken to promote the new industry. Duty was dropped to almost nothing, and the sale of spirits was entirely deregulated. In London, even bakers couldn’t open a shop without going through a seven-year apprenticeship, but now anyone with a room or a wheelbarrow and a little spare cash for some cheap spirits could set themselves up as a dram shop (or dram barrow). It was one direction from the monarch that the people were happy to obey. The king said to drink cheap gin, and drink it they did!

While the poor were happy to take to the new drink, the rich weren’t satisfied with cheap spirits. They still wanted French brandy, and it was smuggled in for them at great risk and expense. But for every barrel of genuine French brandy there were half a dozen counterfeits. Why take the risk on the high seas in the middle of a war, when you could knock up a fake in your shed and make a killing? Even if the fake was spotted, there was little your customers could do once you had taken their money and left. They couldn’t exactly complain to the authorities that their illegal smuggled goods were fakes. The counterfeit just had to be good enough to make the sale. To make it more convincing, some counterfeiters would even load their fakes into boats in the dead of night and drop them out at sea. Then the next night, watched by their trusting customers, they would head back out and pick their cargo up as if it had been smuggled in from France.

For two gallons and a half: Take two gallons of British brandy, one in five, one pound and a half of Lisbon Sugar, six ounces and a half of prunes, four ounces of cellery, three ounces of kernels, two ounces of orange peel, a teaspoon full of essence of lemon, two glasses of rose water, and fill up your two and a half gallon cask with water.

P. Boyle, The Publican and Spirit Dealer’s Daily Companion, or, plain and interesting advice to wine vault and public house keepers, On subjects of the greatest Importance to their own Welfare, and to the Health, Comfort & Satisfaction Of Their Customers & Society At Large (Sixth Edition, c. 1800)

Zest of ½ an orange

Zest of ¼ of a lemon

For real authenticity, fill your bath with salt water, seal your brandy into a small wooden cask, drop it in and leave overnight. Enjoy sipped from a brandy balloon with a fine cigar, while you think about how you got ripped off by those damn smugglers again. It’s quite tasty, but not at all convincing to anyone who has ever tasted real brandy.

About the Author 

Ruth Ball is related to Admiral Edward Vernon, the man who invented grog as a way to serve the rum ration to the navy in 1740. She is a chemist and former bartender, and was the founder of Alchemist Dreams, a company dedicated to making handmade liqueurs blended to order for clients such as the British Library and the Science Museum Group. She is the author of Rough Spirits and High Society: The Culture of Drink (British Library, 2017). Having grown up in the Peak District, she now lives in London where she works at East London Liquor Company.

For your chance to win a paperback copy of Rebellious Spirits, courtesy of Alison Menzies PR, all you have to do is comment ‘Yes please’ on this post and I will choose a winner at random (UK ONLY PLEASE!) 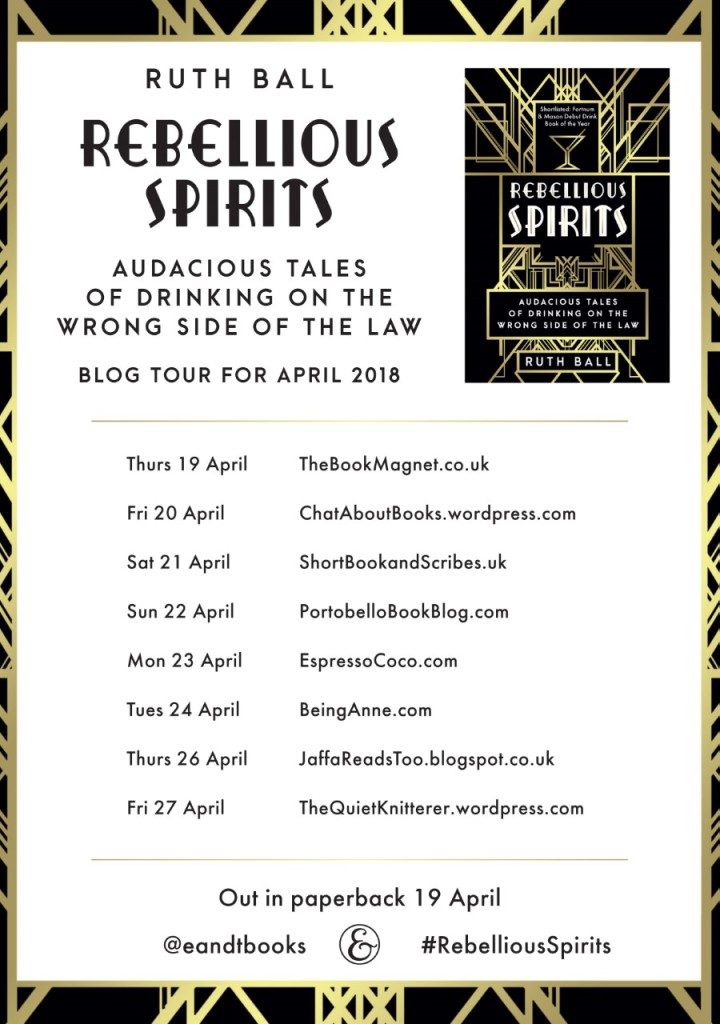 Many thanks to Alison Menzies for my paperback copy and for the opportunity to join in with the blog tour. 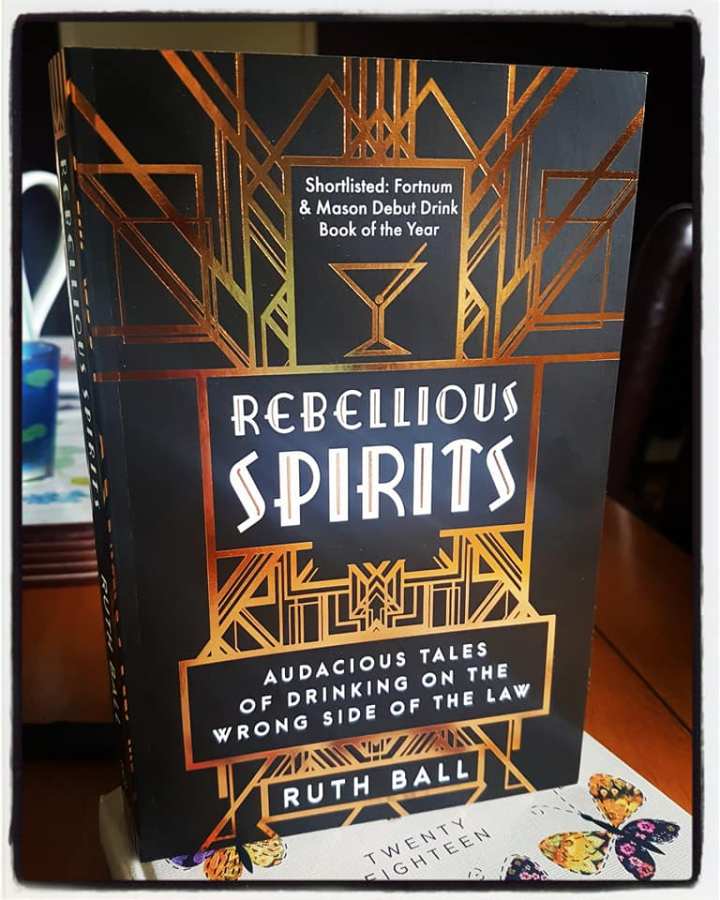