I grew up in what felt like a Looney Tunes cartoon. It was in the days before Australia had become a multicultural society, and before political correctness started trending. My immigrant parents tried hard to live the Australian way—my father thought he was living it because he could fart the national anthem. Even when I’d reached the age where parents are an utter embarrassment to their children, I thought this was funny. But I was hardwired to laugh at pretty much everything. It got me into a lot of trouble as a kid and I became an utter embarrassment to my parents. Now, seeing the humour in everything is my stock-in-trade. My style is a little Monty Pythonesque. And I’m chuffed that my name’s been mentioned in the same breath as satirical novelist Carl Hiaasen, and that my protagonist Ruth Roth has been likened to Janet Evanovich’s Stephanie Plum!

My three off-the-wall books: Odyssey in a Teacup (not-your-ordinary chick lit, coming-of-age story), Cupid F*cks Up (formerly titled Apoca[hot]lips) and My T(r)oyboy is a Twat (not your ordinary romantic comedies). They’re part of a series, but also all standalones.

The best way to tell you about the books is to give you a sense of my protagonist. If she had a rap sheet, it would read like this:

Hair: Reddish, mid-brown (not straight; not curly. But a definite kick in it)

Public mischief: Swears like a drunken sailor. Suffers intrusive and immoral thoughts—struggles to keep them in check. Gives up the struggle and lets loose.

Accomplices: Two females (one with a big mouth; the other with a big caboose); One male—hot-looking cousin/bestie with OCPD (needs to do everything twice, twice).

Consorting (with questionable elements): A woman with two vaginas; real-estate agent who looks like a Ken-doll with moulded hair and moulded God-knows-what-else; humourless school teacher who applies makeup with a trowel, has long cuspids, hairy arms, blokey voice, and smells like vanilla car deodoriser (ecch).

Dangerous driving: Drives mother up the wall. But has grounds for acquittal and should be awarded aggravated damages. The woman’s a pain in the arse.

Connections to the ‘underworld’: Viz. her lizard brain and its lowlife contents.

Fraud: Becomes a blech milquetoast version of her wild-child self.

Arson: She sets his heart on fire, yeah baby, baby.

Contempt of court(ship): She’s not so sure, but then takes the plunge. Lands in hot water.

Trespassing: On neighbour’s property—house-cum-dumpster shithole. Grounds for reduced sentence. The neighbour is a munter who trespasses on people’s lives.

Matricide: Metaphorically speaking. Mama often guilted her with ‘You’ll be the death of me!’

Concealment: Makes hubby hide devastating secret. Creates tension. But men don’t listen. His big mouth sends everyone into hell, except for her late pain-in-the-arse mother, who blows in from there, still carping—‘Nyah, nyah, told you so!’

Misconduct: Alleged. Only alleged! Sexy celebrity pants man, who wants to get into hers. And an educated silicone seductress, who has designs on hubby.

Enough plot twists to put out an APB.

I seriously thought my life had been boring—nothing to write home about. But when I began writing about home and revisiting memories from my past, I unearthed a treasure trove of stupidity.

Many of my characters are adaptations or composites of people I know. Or have met, even if only briefly. But as the story progresses, the characters evolve and take on a life of their own. I have the most fun with the worst ‘originals’—they provide the best raw materials for writing.

I don’t consciously pick them, I let them come to me. And in some instances I’ve realised just how inspired the choice was because the character’s name has become an aspect of the story. (Ruth Roth’s issue with her single-syllable-no-middle-name name has become a bit of a sub-theme.)

I’m not a plotter; I’m a pantser—I fly by the seat of my pants. I get out of the way and let the story and characters lead me. Mostly, astray. But I love writing this way because I never know what to expect. So, I’m both writer and reader.

I haven’t read J.K Rowling’s books but I greatly admire her as a person. I’d probably have heaps of questions if I met her, not least, ‘Would you like to share some of your net profit with me?’

A lousy blurb won’t sell a book no matter how good the book is.

Yes. Books were an escape for me. My favourites were Heidi and Pollyanna.

Having been in trouble so often for laughing at inappropriate times and for arguing against my parents’ adopted views, it became easier to just shut up. But it wasn’t healthy. So I started expressing within the safety of a personal journal. That was 27 years ago. And as I slowly unmuted my voice and uncovered ideas I didn’t even know I had, I expressed them through essays at university. My offbeat opinions were respected, and that gave me the courage to put myself out there a little more: first through an online community for poets and writers, then through my books and blogs.

It wouldn’t be the ending of a specific book as much as a specific genre. The fairy-tale romance.

I grew up with Grimms’ fairy tales. I think these stories with their damsel in distress and her impossibly thin waist (bitch!), her Prince Charming, and happy-ever-after ending duped generations of women. And we might have come far, but these unrealistic ideals that are still in force on a subtle level have become more pervasive since the internet went mainstream.

Mind you, I’m not averse to HEA, and my books have it—we all need a bit of escapism. But my approach is more of a feet-on-the-ground kind. Or, to put it in the words of one writer, it’s a ‘happy for now’ approach. The utopian sort can lead to disappointment and comparisons, and that can breed hopelessness, because life’s just not like that. (Except on Facebook. Many are unremittingly, eternally happy on Facebook.)

I’d have to say ‘Women Who Run with the Wolves’ by Clarissa Pinkola Estés. She’s a brilliant storyteller and interpreter of stories. She can get under fairy tales to show us the real meaning at the root of them. Her writing is soul food at its best.

Woman with a Well-Shaped Farce

I adore Matt Stone and Trey Parker, creators of South Park. So, I’d have to say their character Eric Cartman—the loudest, most obnoxious, most politically incorrect and foul-mouthed! I’d take him to a super, super busy café.

I’m in the early stages of Book 4 in the Ruth Roth Series, but it’s slow-going at the moment because of promotional work and also trying to get some blogging in.

I do a happy dance for five minutes, treat myself to a huge bowl of industrial-strength chocolate ice cream, then get back to writing. But I’ve written the three books back-to-back. It’s only now that I’m taking the time to appreciate my achievements, and to celebrate them … with a bowl of industrial-strength chocolate ice cream.

They can write to me at paula@paulahouseman.com or via social media (I do love a good banter): Twitter— https://twitter.com/paulahouseman

Just that we Aussies have a dry, ironic and sometimes self-deprecating humour. And profanity has a natural place in our lexicon. So, my parents might have struggled, but I’m living the Australian way!

Thank you for taking the time to answer my questions, Paula 🙂

Odyssey in a Teacup 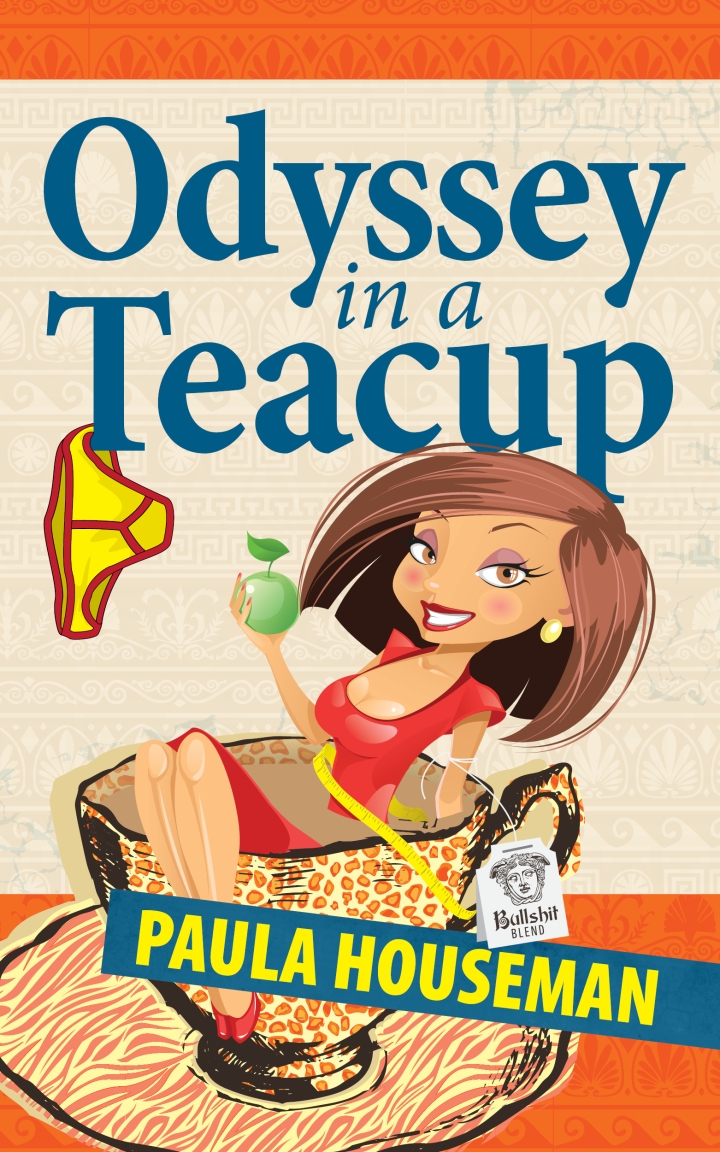 Encounters with a pair of supersized Y-fronts; a humourless schoolmarm with an unfortunate name and monstrous yellow incisors; and a tut-tutting, big-breasted, modern-day gorgon are the norm for Ruth Roth. She’s used to crazy.

Her mum squawks like a harpy and her dad has a dodgy moral compass. Add in daily face-offs with a relentlessly bitchy mirror, and Ruth’s home life feels like a Greek tragicomedy.

She hankers for the ordinary. But blah is not a good fit for someone who doesn’t fit in. And isn’t meant to.

Ruth’s vanilla existence is an issue for her besties—her hot-looking, obsessive-compulsive cousin and soul mate (who needs to do everything twice-twice), and her two closest girlfriends.

With their encouragement and a good homoeopathic dose of ancient mythology, Ruth embarks on an odyssey to retrieve her spirit. She’s confronted with her biggest challenge ever, though, when one of these friends sends her spiralling back into a dark place.

The decision she must make can either bring her out or launch the mother of all wars in her world.

Paula Houseman was once a graphic designer. But when the temptation to include ‘the finger’ as part of a logo for a forward-moving women’s company proved too much, she knew it was time to give away design. Instead, she took up writing.

She found she was a natural with the double entendres (God knows she’d been in enough trouble as a child for dirty wordplay).

As a published writer of earthy chick lit and romantic comedy, Paula gets to bend, twist, stretch and juice up universal experiences to shape reality the way she wants it, even if it is only in books. But at the same time, she can make it more real, so that her readers feel part of the sisterhood. Or brotherhood (realness has nothing to do with gender).

Through her books, Paula also wants to help the reader escape into life and love’s comic relief. And who doesn’t need to sometimes?

Her style is a tad Monty Pythonesque because she adores satire. It helps defuse all those gaffes and thoughts that no one is too proud of.

Paula lives in Sydney, Australia with her husband. No other creatures. The kids have flown the nest and the dogs are long gone.