Many thanks to Kelly @ Love Books Group 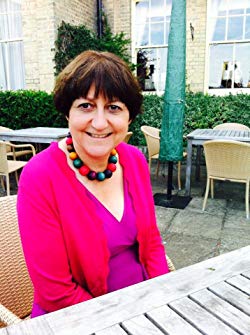 I am lucky that ideas seem to come to me all the time, usually in the middle of the night! This novel is a mixture of fact, fiction, research and my own ideas.

Yes. Many of the characters are based on the real people who lived on Hydra in the sixties but I have fictionalised them to some extent. Jack and Frieda Silver are based on my parents but again they are a fictionalised version of them. Not all the events in the novel happened.

That was easy as most of the characters have the real names that they had but the made-up names came easily.

I think that a lot of writing is thinking. Driving to work and also swimming provide me with the mental space to try to think about characters and plot and work issues out. By the time I sit at the computer, all that planning and a strange kind of alchemy happen and the words pour out although, of course, there is also a lot of editing and redrafting that comes later.

I would love to have met Virginia Woolf, although I suspect that I would have been intimidated by her manner and her incredible talent.

Yes. I read a huge amount and my parents always encouraged me to do so, but not in a pushy way.

I wrote my first novel when I was eighteen but I was always writing as a child. It seems to be innately what and who I am.

No specific book but I would urge writers not to feel that they have to have happy endings. I see life as messier and more complex than that. Fairy tales which end with ‘And they lived happily ever after’ seem ludicrous to me.

Pageturner. That would capture my own reading, how I want my novels to be for my readers, and my philosophy, which is to try to keep going forwards and to enjoy good times when they occur but to walk through the hard times. My father had a useful saying: There are times to enjoy and times to endure.

I like Dorothea in Middlemarch as she embodies that stoical philosophy. I would take her for a treat and give her lovely pastries and good coffee as she is always thinking of others rather than herself.

I always have short stories on the boil or rather on simmer. I can return to them in between novels, when I want to.

Apart from The Water and the Wine, I have three short stories being published this year.

Drink champagne with my family and have a toast.

They can post reviews on my Amazon page or Goodreads but if they want to ask me a question they can email me on tamar.hodes@virgin.net.

I see life as difficult, wonderful, beautiful, ugly, magical and mundane. I hope that I convey that in my fiction.

It is the 1960s and a group of young writers and artists gather on the Greek island of Hydra. Leonard Cohen is at the start of his career and in love with Marianne, who is also muse to her ex-husband, Axel. Australian authors George Johnston and Charmian Clift write, drink and fight. It is a hedonistic time of love, sex and new ideas. As the island hums with excitement, Jack and Frieda Silver join the community, hoping to mend their broken marriage. However, Greece is overtaken by a military junta and the artistic idyll is threatened.

Growing up, Tamar Hodes’ neighbours were Leonard Cohen, his girlfriend Marianne, and other writers and artists on the Greek island of Hydra. Her parents took her to the island to pursue their own art and writing. However, the bohemian nature of Hydra destroyed their marriage. The Water and the Wine is a fictional account of those days.; Tamar Hodes’ first novel Raffy’s Shapes was published in 2006. She has had stories on Radio 4 and others in anthologies including Salt’s The Best British Short Stories 2015, The Pigeonhole, Your One Phone Call, the Ofi Press, MIR online and Fictive Dream. Tamar was born in Israel and lived in Greece and South Africa before settling in the UK. She read English and Education at Homerton College, Cambridge. For the past thirty-three years she has taught English in schools, universities and prisons.