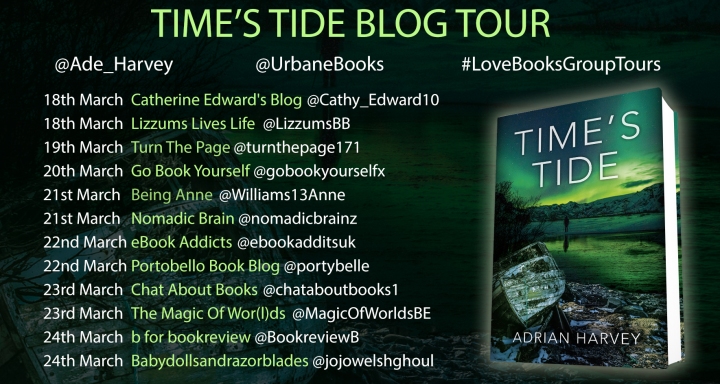 Many thanks to Kelly @ Love Books Group Tours for arranging the following interview with Adrian Harvey…..

My books tend to be character-driven. I’m more interested in exploring why someone does what they do, how their relationships reflect and shape who they are. All three books – the love story Being Someone, the coming of age The Cursing Stone, and my new one, Time’s Tide – are very different narratively, but they have that in common. That and place – I’m fascinated by places, city streets as much as mountain tops, and travel as much as I can with my trusty notebook. I think landscape plays a big role in my writing; it certainly does in the new book.

Often my jumping off point is a story that someone tells me, something that snags my imagination, sets the cogs whirring. With Time’s Tide, my current book, that story was told to me in Iceland, on the way over to Hornstrandir, a desolate place in the far north west of the country. It’s where much of the novel is set and, in fact, the landscape there is almost a character in itself. The young woman told me a tale about her grandfather’s cow and that became the opening to the book. The trick is to always be listening – people are dishing out great ideas all the time.

Sometimes people think they’ve spotted themselves in my books, but it’s not true! My characters are a blend of everyone I know (as well as some people I’ve only overheard on the street) and myself. I’m in every character, I think, if only a little bit. How can it be otherwise? The only time a specific person is directly related to a character is when I use someone’s voice to get the dialogue right: I imagine so-and-so speaking the words, and if it doesn’t sound natural, I’m getting it wrong.

Picking character names is usually quite tough. If the character is really well-developed, the name sometimes just seems right, almost like the character chooses their own name. But most of the time there is a lot of head scratching and a lot of research. In my first book, Being Someone, I changed the name of one of the main characters between first and second drafts: her original name didn’t really fit, but then I saw a name on a reserved table in a City wine bar, and I just thought “That’s her”. With this book, Time’s Tide, it’s a bit easier because there is literally a list of allowed names for Icelanders, so I trawled through that for the minor characters.

I start with a sheet of A3 paper and draw a diagram of the plot and the characters needed to make that happen. Then I turn that into a short document setting out the plot, themes and details of the characters – back stories that never make it into the books. That document is my compass over the months that follow: when I get lost in the details, I can always return to it, remind myself of what I’m supposed to be doing. Other than that, it’s just a matter of sitting at my desk in the spare bedroom and typing. The maxim I work by is: “Don’t get it right, get it written” – the effort is all in the rewrites.

I like making lists like this, but asking for my top 5 authors feels a little daunting – it really depends on the day you ask! But since you’ve put a gun to my head, I’m going to go with Philip Roth*, A L Kennedy, George Orwell, Anuradha Roy and Orhan Pamuk. What they have in common is that they all write beautifully – all have brought tears to my eyes and all have had me endlessly re-reading a passage, a sentence or a phrase just for the joy of it.

*Philip Roth would make it to the top of the list on any day, to be honest.

It would have been Phillip Roth, but he died last year, and in any case I would probably have been too overawed to ask anything sensible, I would just have gushed. I have met A L Kennedy, and I asked her why she had such a grim fascination with dentists.

I was a massive reader as a child, more so than as an adult. I ploughed through books. I loved Ursula Le Guin, but also Conan Doyle and Arthur C Clarke. It was a simple escape to other realms, but I also learned to love language, to enjoy the way that words work together. That has stayed with me, even if my reading is more sporadic now.

I’ve written for work a lot during my career in the policy world: my first book was actually something on reforming the monarchy. But it was always writing for someone else, to order, always with someone looking over my shoulder. Then in 2011, I took redundancy and – aside from some travelling – I spent the time seeing what it would be like to write fiction, to write for myself. I didn’t intend to try to get the thing published, just to see if I could get it finished. I did and I thought it wasn’t too shabby, so… Anyhow, I loved the process of writing. When it works, it’s both liberating and all-consuming.

My first reaction to that question was ‘No, of course not!’ But then I remembered reading Orhan Pamuk’s My Name is Red just after I finished writing Being Someone. I try not to read while I’m actually drafting, to minimise the influence of other writers, which means that I end up with a big stack of books to read. Anyway, I was feeling fairly good about my novel, until I read that. It made me realise how limited my talent is. So while I don’t wish that I had written it, I wish I could write something as good as that.

Back to Pamuk, I’m afraid. I’m not one for tying up every last thread at the end of a story – life carries on beyond the last page and it’s fine for that to be completely unknowable, something the reader creates for themselves. Not everything needs to be explained. So a little like the last third of Captain Corelli’s Mandolin, I would strike out the last chapter of Pamuk’s The Red-Haired Woman: I’d loved it up to that point and, while the perspective of the red-haired woman herself didn’t detract from the book, for me it added nothing. Better to end with the father and son fighting at the top of the well, and to leave the rest to ambiguity.

Probably something like Maps and Legends. I’m a bit obsessed by places and the stories that spring from them, and I also like to travel and to walk, so that feels appropriate. In many ways, my autobiography would be more like an auto-geography, mapping my life onto the places it’s been lived. There would be mountains and there’d be plenty of getting lost along the way.

Ah, the work in progress question! Well it’s a bit different to anything I’ve produced before. I guess it’s a political thriller, but it’s set in an unspecified time and place and that’s a challenge, because I love to write about landscape and places, and there aren’t any in this one. In fact I’m trying hard to keep as much of the action as possible in a handful of rooms, most of them without windows, to create a sense of claustrophobia. I’ve no idea if it’ll work and since I’m only half way through the first draft, it might be completely different by the time I’m done.

My new novel, Time’s Tide, is out in mid March. As I said earlier, it starts with an Icelandic cow, but it is really about the relationships between fathers and sons, about the distance between them and the enduring connection. There’s also a lot about landscape – the landscape is a character in its own right, rejected but inescapable, and the scene of tragedy and loss. And there are beards, lots of beards. And more coffee and cigarettes than are good for you.

Mine’s a pint if you’re buying…

I spend far too much time on Twitter, so that’s probably the best place to find me – @ade_harvey

Thanks for taking the time to answer my questions, Adrian 🙂 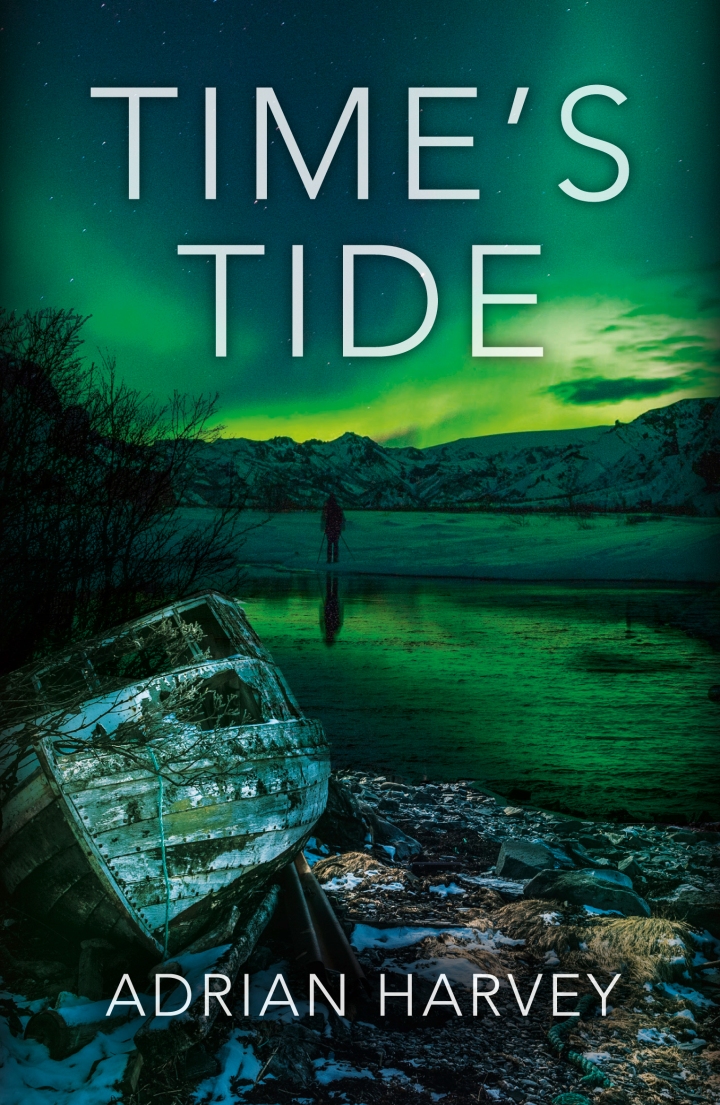 The new novel from the bestselling author of Being Someone and The Cursing Stone.

A father and son struggle to overcome the distance between them. Each is drawn irresistibly to an unforgiving landscape, one that has been the scene of tragedy and loss.

The son’s return to the northern shore he abandoned as a young man promises the chance to heal the rift. But is it too late?

Arni left his remote corner of Iceland as soon as he could, seeking opportunities beyond winter and fishing. Married to an English woman, he builds a life as a successful scientist but can never quite escape the pull of the West Fjords and bleak landscape of his birth, nor shake the guilt he feels towards his distant father.

When Eirikur goes missing, he sets off to find him on a windswept spit of land lost in an angry ocean.

Time’s Tide is a compelling and beautifully written story of loss, belonging and the silence between fathers and sons.