Welcome to my stop on K.H. Irvine’s A Killing Sin blog tour with Love Books Tours! 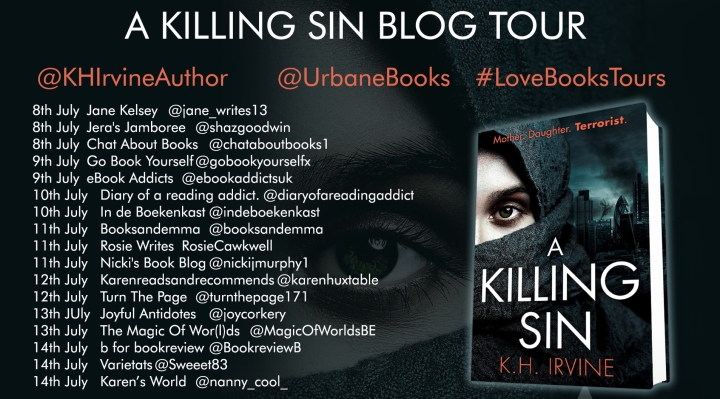 Many thanks to Kelly @ Love Books Group Tours for arranging the following interview with K.H. Irvine…..

Hi Kerry thank you for asking!

I am Scottish but have lived in or around London for over 30 years. I have worked all over the world focussing on what really makes people tick – how do we get to be at our best and what derails us from getting there. I am totally fascinated by people, why they do what they do and what they might do in extreme circumstances.

I am married with two daughters and in a few weeks about to be the proud owner of ‘Dorothy Barker’ (Dotty) a Cavapoo.

The book was my 50th birthday gift to myself (never too old to give something a go).

Amala Hackeem, lapsed Muslim tech entrepreneur and controversial comedian, dons a burqa and heads to the women’s group at the Tower Hamlets sharia community. What is she doing there?

Ella Russell, a struggling journalist leaves home in pursuit of the story of her life. Desperate for the truth. She is about to learn truth is the first victim in the war on terror.

Millie Stephenson, a university professor and expert in radicalisation arrives at Downing Street to brief the prime minister and home secretary. Nervous and excited she finds herself at the centre of a nation taken hostage. And then it gets personal.

Friends since university, by the end of the day and all three women’s lives are changed forever. They are about to find out if friendship is stronger than fear.

And who is Nusayabah? The damaged and strategically brilliant terrorist holding the nation hostage.

She strikes at the centre of power, the establishment and the lives of the three friends.
For her it’s personal. But who is she?
How can she know so much?
How far will she go?
Can they find her before it’s too late?
I hope it is an audacious first novel, gripping from start to finish, full of hairpin twists and turns and with some thought-provoking insight.

The first idea was about being a feminist. I worry that even now we don’t have equality. We are reluctant to talk about the impact of extremism on women. I worked with a very senior professor at the LSE and we were in Lebanon and Jordan. One night we were watching the flares over the Gaza strip and she told me about her work with women in Afghanistan. Three generations of women in one family; the Grandmother showed her photos of when she was a young woman – she looked exactly like Dusty Springfield (all eye liner, big hair and a mini skirt), the Mother was deeply traumatised by having lost her job as a teacher when the Taliban had arrived and the Daughter was swathed in a niqab and had bought the whole idea that she didn’t need an education. I couldn’t get that story out of my mind.

I also spoke to soldiers who had been undercover in Afghanistan for years and the whole idea about the way the world could be moving as we sleep walk into a return to medieval ideas fascinates me.

I hear a lot of secrets through my work and secrets are what drive many stories. Keeping them, fearing them and sharing them drives a story. The core of the story is really vulnerability – vulnerability exploited is what radicalisation is. When we are vulnerable we create a ‘cognitive opening’ and it can be manipulated by charismatic people with an agenda (doesn’t matter if it’s terrorism, drugs or sex…its all exploitation)

I also like the idea that women are the main characters – they are funny, flawed, vulnerable and strong and that they can be in big roles and be great friends (one agent rejected the book on the basis of that not being realistic – bah!)
Are any of your characters based (however loosely) on anyone you know?

Yes, but loosely. I am sure everyone writes a little bit of themselves into characters – both how we are, how we might like to be and how we would be if some our traits were amplified or we found ourselves in unexpected circumstances. Millie is closest to me but only in parts. Through work I have met hundreds of people who share their deepest secrets with me …I have stolen quite a few of those.

Some for what they mean. Millie is ‘loud and brash’, Amala ‘makes you laugh and has your back’. Nusayabah is the first woman to fight side by side with Allah. Some just seem to fit…I change them quite often as the character develops.

I have a house on the north coast of Ireland and I go for a week at a time. I buy a big box of Celebrations (other chocolates are available) and on the first day I sleep and re read what I have then I walk along the beach trying to immerse myself back in the story. I have a playlist that always has ‘Take me to Church’ on it as it was out when I first started the book and always makes me think about the lyricism of the Irish and how they tell great stories. I play it really loudly and dance and sing with no one looking!

I then write with no editing for a few days and then go back through with notes for research. Sometimes I can write 5,000 words a day and sometimes 500 and some days zilch.

Really – that’s like asking you to pick your favourite child???
So….
Margaret Atwood (she is awesome and so able to tell a story that makes you think!)
Khaled Hosseini (A Thousand Splendid Suns could be my favourite book in the world)
Martha Gellhorn (no one wrote about the waste of war better than her)
Jo Jo Moyes (best escapism)
Ken Follett

Our well being is, in part, linked to learning. All of these authors help you learn something quite often without feeling like you are until you reflect on it later.

Maya Angelou – because I couldn’t fit her into the top 5! I would ask her what has enabled her to remain so gracious and what does she see as her legacy?

Ridiculous – I was always the one with the torch under the covers and my idea of heaven was Enid Blyton!

If you could re-write the ending to any book what would it be and what would you change?
Is there a book you wish you had written?

My oldest daughter who read English Literature stunned me when she told me that the ending of The Road by Cormac McCarthy was not a happy ending – I had lived in blissful ignorance that the boy was saved.

A Handmaid’s Tale – it is fabulous. It is a wake up call, it stands the test of time, the characters are amazing and it still disturbs me having read it half a dozen times.

Live your own big life

Catherine Earnshaw and I would ask her if she fast forwarded to today what would she do differently and it would have to be Betty’s tea room for Yorkshire tea.

Book number 2 is a few years further on from a Killing Sin and is about the rise of the Alt Right. There is a tit for tat war on the streets of the UK and we have normalised some pretty appalling views. Two characters return Millie and Alex plus some new ones. Again, it meshes the personal and the political in a female led thriller.
Number 3 I have in mind to call 11 Days – maybe apocryphal but that’s how long it can take any one of us to fall through the net and end up on the streets, I want to write it backwards from day 11 to day 1 so it’s hard to guess who it is that is begging for money in the prologue.
Tell us about your last release?

This is my first

It’s a fast paced, page turner that I hope makes your heart beat faster.
Let me know what you think of it!

Thank you for taking the time to answer my questions! 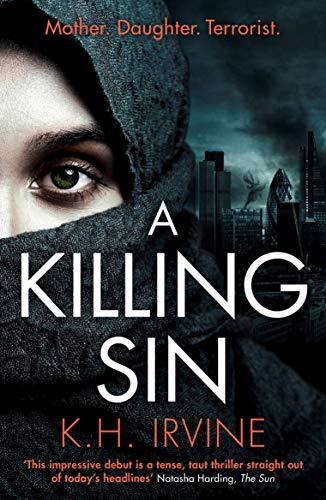 ‘This impressive debut is a tense, taut thriller straight out of today’s headlines.’ – Natasha Harding, The Sun

Would you surrender your secrets to save a life?

London. It could be tomorrow. Amala Hackeem, lapsed Muslim tech entrepreneur and controversial comedian, dons a burqa and heads to the women’s group at the Tower Hamlets sharia community. What is she doing there?

Ella Russell, a struggling journalist leaves home in pursuit of the story of her life. Desperate for the truth, she is about to learn the true cost of the war on terror.

Millie Stephenson, a university professor and expert in radicalisation arrives at Downing Street to brief the Prime Minister and home secretary. Nervous and excited she finds herself at the centre of a nation taken hostage. And then it gets personal.

Friends since university, by the end of the day the lives of all three women are changed forever. They will discover if friendship truly can survive secrets and fear.