Welcome to my stop on Deirdre Quiery’s The Painter blog tour with Love Books Tours! 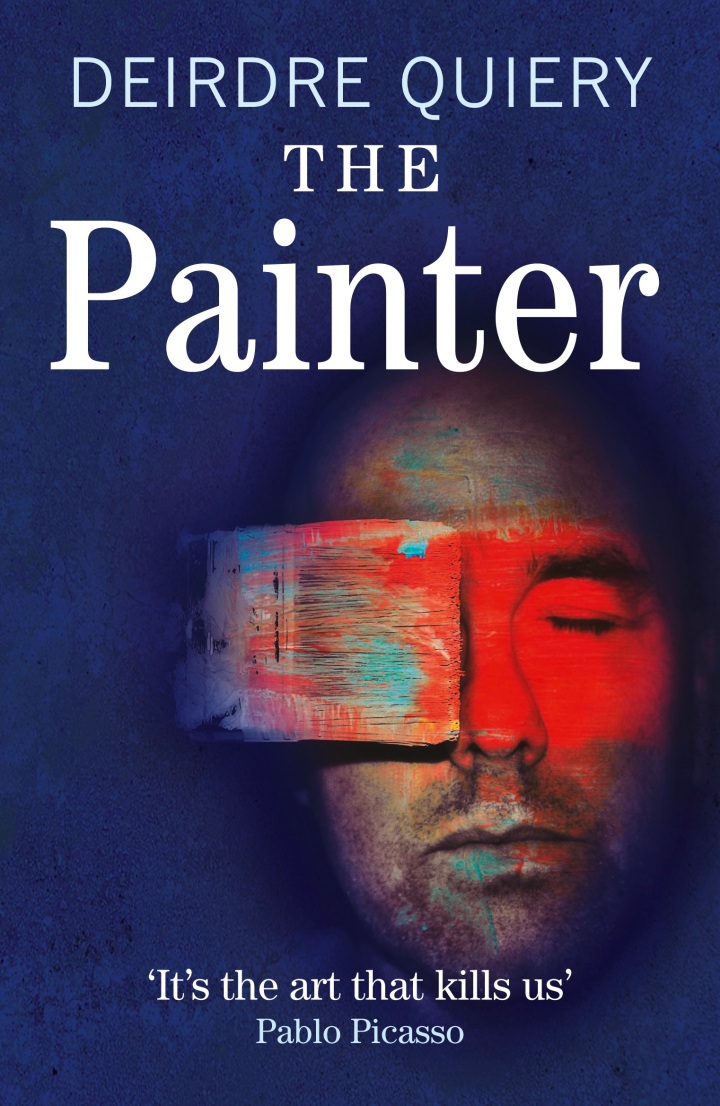 Belfast born Deirdre Quiery is based in Mallorca where she runs Seven Rocks Consulting. Not just a writer, Deirdre has not only painted with Argentinian artist Carlos Gonzalez in Palma and Natalia Spitale in Soller, she is also a winner of the Alexander Imich Prize in the US for writing about exceptional human experiences, and the Birmingham Trophy Prize in the UK.  The Painter is her third novel for Urbane following the Irish thriller Eden Burning and murder mystery The Secret Wound.

Many thanks to Kelly @ Love Books Tours for arranging the following interview with Deirdre Quiery…..

Q. For those who don’t know already, could you tell us about yourself and your book(s) please?

A. I was born in Belfast and grew up during what are called The Troubles. The 1970s were incredibly terrifying for me. My family were put out of our house at gunpoint. My parents lost everything that they had saved and bought during their marriage. We lived afterwards on a house on “The Peace Line” with daily rioting, three bombs placed outside the house which was taken over twice by the IRA. We even had a poltergeist that was very active to add to the drama of life.

I studied Spanish and Portuguese at Leeds University. It was very much literature based and I loved Spanish literature from “The Golden Age”. After University, I was offered a job as a District Manager in Financial Services and then became a Leadership Consultant which I still do freelance – travelling to 32 countries in the world and helping build skills around emotional intelligence, communication, coaching and conflict resolution.

The biggest change in my life was leaving a world of security and full time work to move 16 years ago to Mallorca, with my husband, our cat Ziggy and two suitcases. We didn’t know what would happen. In many ways it resembled being put out of our house in Belfast in the 1970s as we had nothing and did not know what would happen to us but this time it was a voluntary choice. I felt full of enthusiasm and possibilities.

In Mallorca I wrote my three books. “Eden Burning” based on my experiences in Northern Ireland, “The Secret Wound” exploring life within an ex-pat community in Mallorca where a killer is living a normal life and my recent novel “The Painter” which tells the story of a child prodigy painter, who becomes famous, dissipates his life, commits murder and then in a relationship with his Gardener, he falls into a love-hate relationship which ultimately redeems him.
Q. Where did/do you get your ideas from?

A. Observing life. I find people endlessly fascinating. Growing up in Northern Ireland during the Troubles was maybe lucky for me. I saw how depraved and full of hatred a human being could be and at the same time I also saw others who were inspirationally amazing and unselfish and who did give up their lives to save others. That spectrum of human potential inspires my writing. In Mallorca, I also observed people who have lots of money and live in a beautiful island but they are not happy. There are events which happen here which have all the basis of a Greek tragedy. Sometimes – especially when I lived in an isolated olive grove for 10 years – I felt that I was on stage when some of the dramas unfolded within the local community.

Q. Are any of your characters based (however loosely) on anyone you know?

A. Yes. But I never have written autobiographically. I take inspiration from real people as if they were pots of paint and I paint something completely unique which I feel in a way honours their essence.

Q. How do you pick your characters’ names?

A. The name of each character is extremely important to me. I feel that in naming them, I am bringing them into the world. I take time to think about their names before I begin to write. For example in my latest novel “The Painter” – I called him Augustin – based on the famous Saint Augustine who lived a wild life before converting. He said, “Lord, make me pure but not yet.” That is definitely the mind of The Painter.

Q. Can you share your writing process with us, in a nutshell?

A. I have experimented with different ways of writing. I have found something which I know works best for me. I have to have an inspiring plot that means something to me. I then create character pages for each of the key protagonists – what age are they, what colour are their eyes, what do they like to eat. That is very helpful when I begin writing because I don’t really know them yet and I am still bringing them to life. Later into the writing process I deepen their personalities with little quirks and interests which make them unique.

Q. Who are your top 5 favourite authors?

Q. If you could meet any author, who would it be and what would you ask them?

A. I would like to meet Ernest Hemmingway and ask him why he liked bullfighting.
Q. Were you a big reader as a child?

A. Yes. I started reading at the age of 7 with three library tickets. I read three books a week and those books with a small bag of pineapple cubes were everything I wanted from life.

Q. When did you start to write?

A. I have always kept a journal from the age of 18. Then I began to write poetry at University. I entered a few writing competitions and won first prize for The Imich Competition in the USA for writing about exceptional human experience and The Birmingham Trophy Competition which was business based.

Q. If you could re-write the ending to any book what would it be and what would you change?

A. Some people have told me that they would like a sequel to Eden Burning my first novel. Maybe I could have written a little more about what happened to the characters after the final scene and even thrown in another twist or murder.

Q. Is there a book you wish you had written?

Q. If you wrote an autobiography, what would your title be?
A. “Go Against the Stream.”

Q. If you could invite any fictional character for coffee who would it be and where would you take them?

A. I would invite CIA Agent Alden Pyle from Graham Greene’s “The Quiet American” to the Randemar Restaurant in the Port of Soller and get some tips from him on my next novel.
Q. What are you working on right now?

A. I have recently completed “The Painter”. I have a few thoughts for my fourth novel but first I want to support the launch of “The Painter”. It is a creative act in itself looking at who might be a future reader. It is also very exciting. I am going to enjoy it.

Q. Tell us about your last release?

A. My last release was “The Secret Wound” in London in the summer of 2017.

Q. Do you have a new release due?

A. Yes – totally thrilled that it will be this summer 2019 for “The Painter”.

Q. What do you generally do to celebrate on publication day?

A. For “Eden Burning” we celebrated with Irish tapas in The Irish Pub in the Port of Soller. For “The Secret Wound” we celebrated in London with an exhibition of my art and Molly Sterling – who represented Ireland in the Eurovision Song Contest a few years ago singing in St Mark’s Church. It was a night I will never forget.

Q. How can readers keep in touch with you?

A. I would love to hear from them. Drop me an email on deirdre@deirdrequiery.com or on Twitter @SupernovaQ.

Q. Is there anything else you would like us to know?

A. I’m interested in what we are meant to do with this brief and beautiful human life. I believe that I am meant to write about what we are meant to do in a thriller novel format where the characters are trying to work it out. I love the fact that I create these characters, I love them – even when they are very wicked. I can’t always help them because they have to live their own lives but if they whisper to me from the heart – I will do my best to ease to allow them to reach the fullness of their potential.

Thank you for taking the time to answer my questions, Deirdre 🙂

Thank you Kerry – I so appreciate your interest.

In a desire to impress the people who visit his workshop, renowned artist The Painter, employs a gardener to create an inspirational landscape which includes a labyrinth, an orange grove and Moorish-inspired fountains. They develop an intimate relationship and the Painter, whose life and talent had become increasingly dissipated, finds himself slowly recovering his original innocence and talent. However, the relationship is tainted by the Painter’s jealousy when visitors express more interest in the magical garden and mysterious labyrinth than in the Painter’s art. That jealously blossoms into deadly rage when The Painter catches the gardener changing one of his paintings…. Deirdre Quiery’s compelling new thriller explores themes of love, life and deceit, and examines the lengths we will go to pursue and protect our passions.