Welcome to my stop on Pamela Holmes’ The Huntingfield Paintress blog tour! 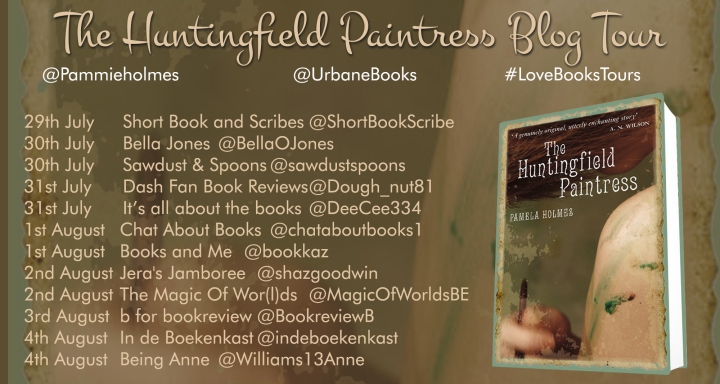 With thanks to Kelly @ Love Books Tours for arranging the following interview with Pamela Holmes…..

For those who don’t know already, could you tell us about yourself and your book(s) please?
My name is Pamela Holmes and I’m a writer of short stories and novels. My first book, The Huntingfield Paintress, is about a Victorian vicar’s wife who paints an angel ceiling. My second, Wyld Dreamers, is about the loves, secrets and lies of a group of hippies living in the Somerset hills in the 1970s who meet up again 25 years later. I live in London, have two sons, grow food on an allotment and sing in a band.

Where did/do you get your ideas from?
For my first book, I was inspired by Mildred Holland, the vicar’s wife who lay on her back for six years to paint a vision of golden angels and saints on the ceiling of a tiny church in Suffolk. I saw her work one New Year’s Day when I called in to he church on the recommendation of a friend. The ceiling wasn’t a casual dabble dashed off on a wet Tuesday – it had taken her six years to paint. I’d always written, worked as a journalist for print and TV, and so on. But seeing her achievement flicked a different writing switch in me. Two years later, I’d produced The Huntingfield Paintress, then I started the second book.
There were subjects I wanted to explore. One was how young people cope with death. My mother died when I was 16 and my friends didn’t know what to say. The character in Wyld Dreamers, Amy, is not me but her experiences draw on my own. I’m also fascinated by secrets. When they’re revealed – which they inevitably are – relationships that seemed unbreakable can be threatened. On the other hand, the truth can heal and deepen the bonds between people.

Are any of your characters based (however loosely) on anyone you know?
Some of my characters are based on people I’ve met but so vaguely that no one would see themselves while others arrive fully formed and I don’t recognise them at all. Characters are a mish-mash of personalities, a patchwork of motivations and reactions of the people I’ve talked to or heard on the radio, sprinkled with imagination.

How do you pick your characters’ names?
I change my character’s names as I write. At first, the name I use just pops into my mind. But as the characters begin to live and love, their name sometimes feels wrong. I’m always listening for names, I carry a notebook and when I come across one I like or better still, a first and a surname that’s a perfect combination, I’ll write it down. I used to assume I’d remember everything because it seemed right. But I don’t.

Can you share your writing process with us, in a nutshell?
I slip from bed early when my body is barely awake but my brain is clear to sip Earl Grey tea, sit at my computer and, on a good day, write until lunchtime. The afternoon is when I garden, think about plot and wonder how the scenes could fit together. I’m useless by tea time. I might review and edit what I’ve written before supper.

Who are your top 5 favourite authors?
I have just re-read Tessa Hadley’s Late in the Day, a subtle and sometimes bitter exploration of ageing and marriage. I love the touching quiet novella West by Carys Davies and Aftershocks by AN Wilson, a story shaking with earthquakes and love. If you’ve never read Olive Kitteridge by Elizabeth Strout or Penelope Lively’s Moon Tiger then remedy this situation promptly; they are both brilliant.

Were you a big reader as a child?
In US kindergarten (as the entry class was called) we were given books about two children, Dick and Jane. ‘Go away, Spot’ was the book that taught me to read. The front of the book showed the dog with the hose in his mouth, spraying Dick with water. Hilarious, I thought. The day I found could read the words, I fell off the stool I was sitting on.

What are you working on right now?
I’ve got a character in mind, a woman in her mid-60s. I’ve written a short story about her; there’s more to write though I can’t formulate it just yet. Keen to attract the attention of men, she’s judgmental and acts on her conclusions in shocking ways. I’m also writing a film script of The Huntingfield Paintress.

Is there a book you wish you had written?
Cold Mountain by Charles Frazier. It’s about a love strong enough to drive a soldier wounded in an appalling Civil War to stagger home across the mountains to a woman left tending the land. I’m gripped by stories about the drive to return, the kindness of strangers and the glory of human resilience. The book is set in a part of the USA steeped in history. I was born in South Carolina but left months later. I’d like to visit.

Tell us about your last release?
It’s called Wyld Dreamers. It’s about five young people who form a hippy commune on a smallholding which crumbles after 18 months. Twenty five years later, circumstances bring the group back together. But where to set the story? That was easy; Somerset, where I’d lived on a farm with friends in the 1970s. None of the characters in Wyld Dreamers are based on people I knew though some of the events mirror what happened; milking cows, gutting rabbits, driving tractors and dancing under the moon. Characters include Amy, who loses her mother soon after she arrives on the smallholding, Seymour Stratton, a successful London photographer who thinks of the place as a playground for his friends and Mrs Morle, the housekeeper who is critical of her employer’s city habits and what the hippies get up to. I explore ideas of that time such as parity between the sexes and self-sufficiency. Our discussions seemed radical then even if they’re mainstream now. So my research for Wyld Dreamers meant delving into diaries, record collections, recipe books and journalism rather than parish records and history books which is what I needed for The Huntingfield Paintress.

What do you generally do to celebrate on publication day?
I pop open something fizzy and celebrate. There’s nothing else to be done on such a special day. You’ve got to live hard and play hard, that was my dad’s motto, and though I didn’t always do what my father told me to, I remember to act on his words.

How can readers keep in touch with you?
I have a website (www.pamela-holmes.com) with a sign-up box which I’d ask anyone interested to use to get in contact. Or they can email me or my agent. I like contact with readers, hearing what they think and what they enjoy reading, too. In the ‘blog’ section of my website, I mention events and talks I’m giving. This summer, several involve me leading workshops on how to get started with writing.

Plucky and headstrong Mildred Holland revelled in the eight years she and her husband, the vicar William Holland, spent travelling 1840s Europe, finding inspiration in recording beautiful artistic treasures and collecting exotic artifacts. But William’s new posting in a tiny Suffolk village is a world apart and Mildred finds a life of tea and sympathy dull and stifling in comparison. When a longed-for baby does not arrive, she sinks into despondency and despair. What options exist for a clever, creative woman in such a cossetted environment? A sudden chance encounter fires Mildred’s creative imagination and she embarks on a herculean task that demands courage and passion. Defying her loving but exasperated husband, and mistrustful locals who suspect her of supernatural powers, Mildred rediscovers her passion and lives again through her dreams of beauty. Inspired by the true story of the real Mildred Holland and the parish church of Huntingfield in Suffolk, the novel is unique, emotive and beautifully crafted, just like the history that inspired it.

Pamela Homes – Pamela Holmes was born in Charleston, South Carolina. At the age of eight, she moved with her family to England. She studied nursing at London University as a mature student having spent three years living on a commune in Somerset where she developed a love of gardening, milking cows and laying hedges. She became a health journalist and on-screen reporter. She now works and volunteers to improve the lives of older people including those with dementia, and she sings in a rock band. The Huntingfield Paintress is her first novel. She won the Jane Austen Short Story Award in 2014 and her latest work was awarded Highly Recommended in the HISSAC competition 2015. Pamela is the mother of two boys and lives in London with her husband.