Welcome to my stop on Shamini Flint’s The Beijing Conspiracy blog tour with Love Books Tours! 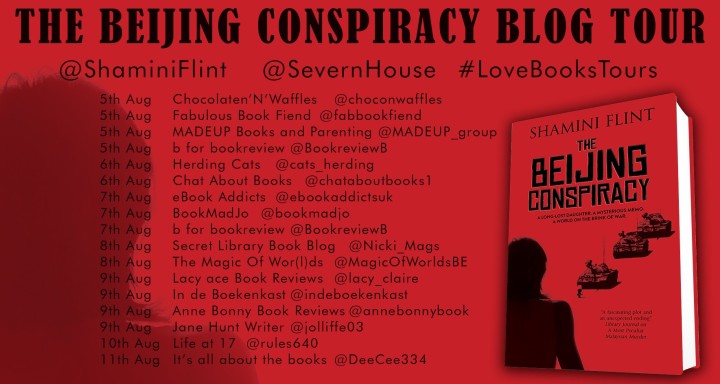 Many thanks to Kelly @ Love Books Tours for arranging the following interview with Shamini Flint…..

I was born in Penang, formerly Jewel of the Orient and now, as a result of rampant construction and destruction, a tarnished stone but with some charm still. I began my career in law in Malaysia before working at the UK law firm, Linklaters, in Singapore. I traveled around Asia for work before resigning to be a stay-at-home mum, law lecturer, coffee merchant, environmental activist and writer. I mostly write about things that worry me which is pretty much everything so recurring themes include the environment, law, politics, society and to calm myself down once in a while, a lot of sport.

I am obsessed with politics – I spend most of my free time reading up on the latest happenings and the history and context of events. It is trite to say that the world has grown smaller but the reality is that political decisions anywhere in the world affect the rest of us on some level – whether it is indifference to the climate crisis of the new Brazilian government, the banality of evil of the Trump administration or the undemocratic consolidation of power by the current Chinese leader.

My earlier crime novels were narrower in geographic scope but over the last few years it has seemed to me that there is an old-fashioned Cold War between the United States and China – a battle for influence, of ideas and ideology and of course, trade and land. The Cold War between the USSR and the US was widely written about and captured in fiction and I felt there was an old-school thriller to be written in this space, hence THE BEIJING CONSPIRACY!

I am a middle-aged Malaysian woman of Indian/Sri Lankan ethnicity and my previous major characters have mostly been Asian. This is the first time I have written the white male protagonist – a sort of reverse cultural apporpriation! But, honestly, I think Jack Ford is the sort of person one imagines a hero to be if one grows up only reading Western literature (there was hardly anything published locally or about anything ‘local’ to me for the the first three decades of my life). Before I realised that I was circumscribed by my race, gender and culture, Jack Ford is the hero I think I wanted to be; jaded, defeated, bitter but always finding the last dregs of energy to do the decent thing.

Oh help! This is an ongoing process. I usually use placeholders – actual people or public figures upon whom a character is based. And then I have a fortnight of panic where I try and replace these with made-up names when the manuscript is complete. I often turn to the newspapers, use mashed-up footballer names – Ronaldo Beckham anyone? – and in this latest book, have used the names of friends of my children for various cameos. My kids are very popular in school right now!

Discipline. I write approximately 2000 words a day even on weekends. If I have more to say, I can go on longer but I very rarely do less when trying to write a book. The plus side is that I do end up with a manuscript; the minus is that vast amounts of writing ends up on the cutting room floor because I’ve forced myself to write when I haven’t had a germ of inspiration and the result is awful. I do, however, find it easier to edit work done than cope with an empty page.

Agatha Christie. I would just thank her for inspiring a generation of crime writing and for giving us Poirot. The I would ply her with alcohol and try and deduce how she achieved such a range of plots over so many books including such classics of the genre as Who Killed Roger Ackroyd and Murder on the Orient Express.

Yes – although I grew up in a town without a bookshop or a library – the abiding memory that all my family share about me is where I am curled up on the sofa with a book, oblivious to instructions and conversation.

Twelve months after my daughter was born sixteen years ago. My hormonal decision to quit my job as a lawyer to become a stay-at-home mum had just about driven me to distraction at that point and the decision to start writing saved me from going completely bananas.

I don’t know about books but I am still in a temper over Season 8 of Game of Thrones. What in the world did the writers think they were doing? To me, it was lazy, sexist tropes strung together with special effects and a real betrayal of their loyal audience. I hope I never do that to my readers.

Every single book except mine? As a writer, the vast amount of talent around is quite daunting and honestly makes one pause and wonder what one has to add. I still don’t know quite know by what right I write and it leaves me in a cold sweat once in a while.

If I could rewrite a ‘book’ – I would probably fix the Bible – take out all the nonsense about homosexuality and add more details to the whole “love thy neighbour” spiel – equality for women, minorities etc. Also, I would probably take out any and all references to God.

Haven’t the faintest! I say that, and now I realise that could be my title. HAVEN’T THE FAINTEST – An autobiography by Shamini Flint.

Atticus Finch. I’d probably take him to an outdoor place with lots of greenery and privacy so I could have him to myself. Also, it would have to be a place that served Fairtrade coffee and did not have those plastic stirrers.

I usually have more than one project going on at the same time so I don’t get bored. So right now I am working on a volume of poetry, a graphic novel on environmental issues and a humorous biography of my father.

THE BEIJING CONSPIRACY is, I hope, a dramatic story about the world on the brink of war between the major superpowers and, I think, a terrifyingly plausible plot of how we might end up in such a place when our politics are in the hands of the greedy, inept and short-sighted.

The hook, or the trigger for writing it, was that image of the Tank Man and his lone protest in the aftermath of the Tiananmen Square massacres in 1989. It is a picture that has haunted me for years and I was glad to finally write a book that reminds us of his lasting sacrifice.

Not due as such but a couple of things should be ready for publication by the end of the year.

A quiet glass of champagne and a sense of it all to do over again. I am not very good at enjoying myself.

Thank you for taking the time to answer my questions, Shamini. 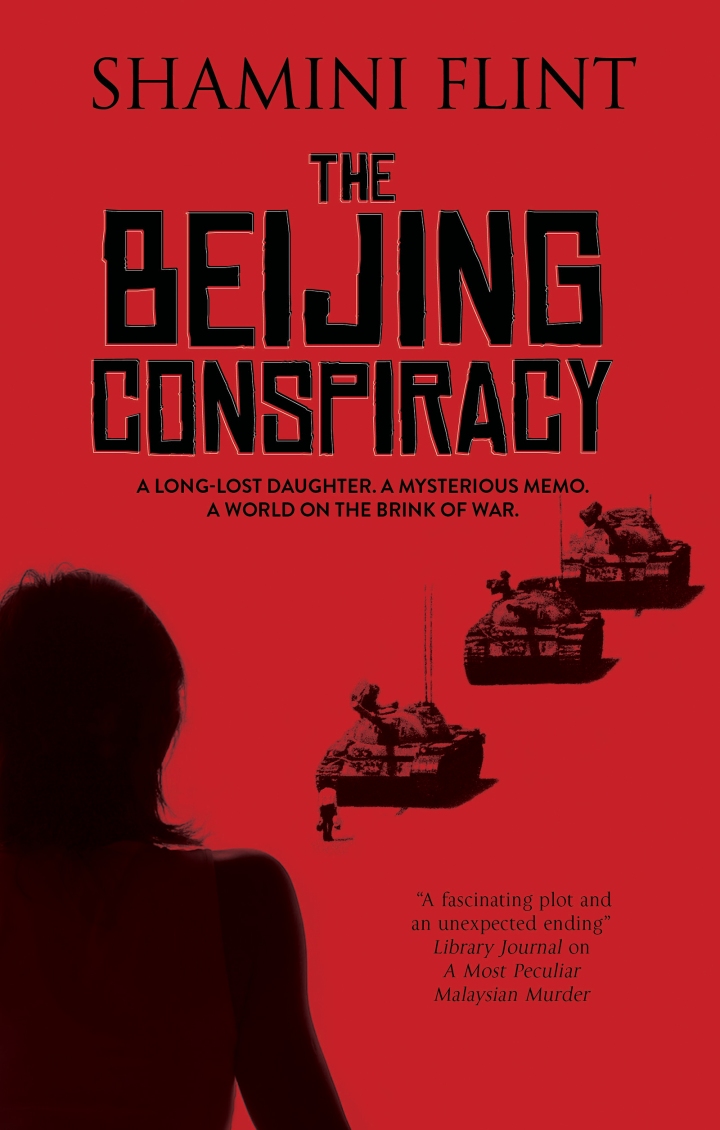 “I need your support. There is no one else I can trust. Please help her. Please help our daughter.” When ex-Marine Jack Ford receives a letter containing news of a daughter he never knew he had, he feels compelled to return to China, a country he hasn’t visited since 1989 when, as a young American spy, he fell in love with a beautiful student activist and found himself caught up in the horrors of the Tiananmen Square massacre. But why has Xia got in touch now, after a thirty-year silence? On arrival in Beijing, Jack finds himself accidentally in possession of an explosive piece of information both the Chinese and American governments are desperate to get their hands on. Alone in a strange city, suspected of being a traitor by his own side, not knowing whom to trust, Jack is faced with an impossible dilemma: should he save his new-found daughter or prevent a new world war from breaking out?

2 thoughts on “The Beijing Conspiracy by @ShaminiFlint @SevernHouse #AuthorInterview #LoveBooksTours”