Welcome to my stop on Mark Stibbe’s King Of Hearts blog tour, with Love Books Tours! 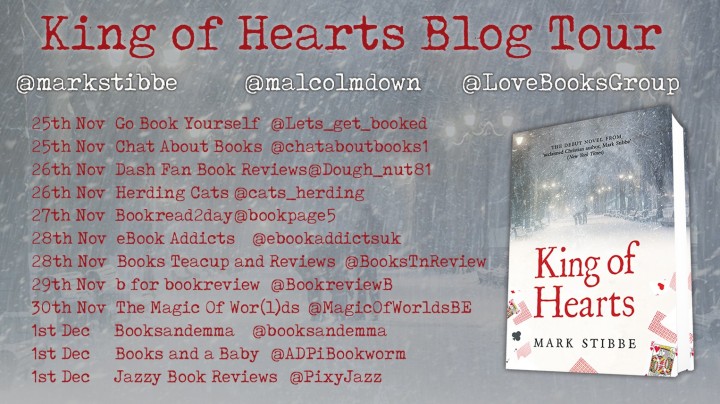 Many thanks to Kelly @ Love Books Tours for arranging the following interview with Mark Stibbe…..

I’ve been a published author since I was 16. After that, I was a Vicar until 2009, and therefore most of my 50+ books have been religious nonfiction. In 2011, I began the transition to fiction. Since then I have been writing gritty stories with spiritual heart, such as The Fate of Kings, the story of a Vicar who becomes a spy in the French Revolution. King of Hearts, my latest, is in that vein.

The idea for King of Hearts came from a question I asked in 2011. If the Parable of the Prodigal Son were to be retold today, how might it be different? Answer? The father, not the son, would be the one who runs away from home. I was leading a charity that I founded at the time, dedicated to addressing fatherlessness. That answer pulled the rest of the story in after it.

I guess it’s true that you write what you know. There are some similarities between Jake (the protagonist) and me, and between Sandra (the prostitute who befriends Jake) and a girl who was murdered in Glasgow, whose funeral was taken by a friend of mine. The symbolism of the feathers in her portrayal comes directly from this true and tragic story.

Names always come to me very quickly. In this case, some of them have symbolic or metaphorical resonances in the story world I’ve created. So, for example, Pete Marley’s surname is indebted to A Christmas Carol. I have structured the entire story of King of Hearts in the same way that Dickens designed A Christmas Carol. I could say more about the other names, but you’ll have to discover the significance of those for yourselves!

Briefly, it starts with inspiration (the germ of an original idea or question), then incubation, then investigation, and finally incarnation. I could spend all day talking about this (and frequently do in writing workshops and conferences), but I’ll leave it at that!

I am writing within a tradition of fiction writers whose faith impacts their storytelling in a subtle rather than a simplistic way: Flannery O’Connor, Graham Greene, CS Lewis (my adoptive father’s friend and teacher), Maurice West, John Irving, Cormac McCarthy etc. These would be go-to authors for me. I return to their work frequently, but I also love authors who expose the hypocrisy and abusiveness of some forms of organized religion, so Philip Pullman, Margaret Attwood etc. And I love the way Stephen King creates Christ figures in stories like The Green Mile, and pretty well everything he writes, for that matter.

Tolkien, my adoptive father’s English Professor at Merton College, Oxford. I would ask him how, in his own experience, the idea of being a “sub-creator” played itself out in the writing of The Lord of the Rings. I have a raft of other questions too! “What was Dad like in his 20s!?”

Yes. I started with Conan Doyle. I remember also reading Agatha Christie on a bus touring the Holy Land. I hope I don’t get struck down for saying this, but I was more impacted with the story than the landscape! My twin sister was on the same coach with her head in Watership Down, written by an author to whom our dad taught English. She’s a fulltime novelist today in the USA (Claire Stibbe). Look her up on Amazon. She’s amazing!

When I thought my Teddy was lost forever. I was probably around eight or nine. I wrote a ten-page story (handwritten in ink pen) called The Epic Adventures of Edward Bear. I found it recently in the garage in a box of things my mother had kept for me, and which were handed onto me after she died in 2015. One day, I’ll publish it!

If you could re-write the ending to any book what would it be and what would you change?
Is there a book you wish you had written?

Not the ending of a book, no. But I would rewrite the whole of series 8 of Game of Thrones which was a grave disappointment. I hope George R.R. Martin does a much better job! As for the Q, Is there a book I wish I’d written? The answer is no. I have always taken very seriously Toni Morrison’s statement that if there’s not a book written on something that you feel passionate about, then you should write it. Writing a book is revealing part of your soul. It is intensely personal. To want to have written another person’s book is an impossible thought for me; it implies that I want to be someone other than myself, which I don’t. I’m happy in my own skin.

An Orphan No More. I have started writing it in my head.

A fairy tale. And a psychological thriller about an abused Norwegian woman with a Viking spirit.

Yes, my American publisher is releasing a beautiful, hardback gift book of mine called The 100 Verse Bible on December 17th. Next year, I’m publishing the first in a series of Sci Fi MGF titles about an autistic boy on a faraway planet in a fantastical universe.

A quiet meal with my beautiful Irish wife Cherith, and a snuggle in front of a favourite film with her and our Black Labrador Bella. I’m not a big one for celebrations to be honest.

And then there’s my websites

http://www.advice4authors.com (my blog site, for free advice for authors)

http://www.markstibbebooks.com (with all my most recent products, including my writing for The Times, my interviews with BBC, etc)

King of Hearts is out now. It will make a GREAT Christmas gift for your friends and family. If you order one from my website, I’ll sign it for you.

Thank you for taking the time to answer my questions, Mark 🙂

It’s a pleasure. Thank you for supporting those of us who are trying to make a living from writing. It’s a huge challenge. We appreciate it. 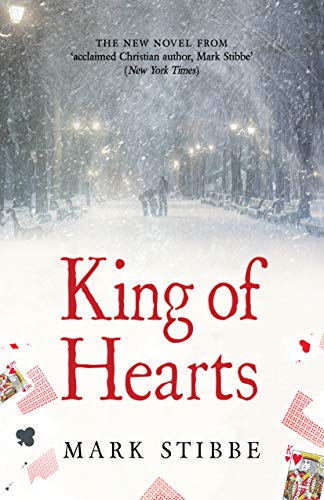 King of Hearts tells the gripping story of Jake Graystone, a struggling teacher, husband, and father, who looks for easy money playing poker. When his wife Sally exposes his secret addiction on Christmas Eve, he walks out and heads north for Casino City, leaving his family for a dark world of gambling, prostitution and murder.
How will the cards fall for Jake in this brutal, urban wasteland? And, as the stakes get higher and higher, will this modern Desperado ever come to his senses?

King of Hearts is a winter, festive story to sit alongside It’s a Wonderful Life and A Christmas Carol. Raw yet redemptive, it is a Christmas tale you’ll not be able to put down.

At the end of each chapter, you will want to twist, not fold.