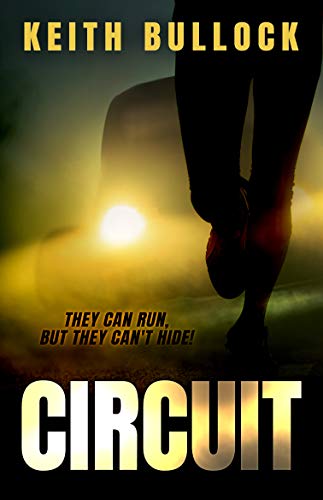 Oh, my word! Circuit is a truly gripping crime thriller which captured my attention from the very first page and held it to the very last.

This is a crime thriller with a difference though.

A married couple are attacked whilst out jogging on Christmas Eve and we know who the two young attackers are from the start. The story is centred around them, and their victims, after the attack.

The perpetrators’ friendship changes as a result of their crimes and they each deal with what happened due to their drunken stupidity in very different ways. One is far less remorseful than the other and this puts an enormous amount of pressure on the friendship they’ve shared since childhood.

Their poor victims, Ken and Helen, struggle to come to terms with what happened. Neither can really recall what happened. Ken because he was knocked unconscious and therefore unable to recall any details. The horrific nature of Helen’s attack is so traumatic that her mind’s natural defence has, unsurprisingly, suppressed her memories of the whole ordeal and she can’t shake the feeling that her husband failed to protect her. This puts further strain on their marriage. Their daughter, Sue, and Helen’s mother are beside themselves with worry as time moves on and things become gradually worse rather than healing with time. Helen’s deteriorating mental health sees her hospitalised and the family facing further turmoil as a result of the unprovoked attack. My heart went out to Helen. I can’t even imagine how you would move on from such violation.

The police investigation seems to be getting nowhere fast and Ken’s frustration is palpable. His friendship with the man leading the investigation is strained, to say the least, as a result. He is hell bent on revenge.

When Sue reveals that she has a new boyfriend and seems to have found some light in the darkness of their lives, Ken is relieved and happy for her. Some good in their lives at last. Neither are prepared for the truth they are soon to be faced with though.

A cruel twist of fate.

This story has a solid plot with many a twist along the way, but it is very much character led. A strong cast of characters living in the aftermath of a horrendous crime makes this an extremely compelling read. All are fascinating in their own way, even the ones who made my skin crawl. The victims, the attackers and the police paid to serve justice all have their own stories to tell. Some have a stronger conscience than others.

I had no idea which direction this story would take. Each new chapter brought a new surprise and the conclusion was quite a shock. Very cleverly written! I highly recommend!

Many thanks to Keith Bullock for my lovely signed paperback copy of Circuit.