Hi there, I’m Adam and I publish fantasy (mainly with Gollancz) under the name of A J Dalton. My best known trilogy starts with Empire of the Saviours, which sold well in Germany for some reason. Either the Germans have good taste or no taste whatsoever! Oh, and I’m the UK’s leading author of ‘metaphysical fantasy’ (www.ajdalton.eu), mainly because all the others are dead. It wasn’t me! What’s metaphysical fantasy? Well, the short answer is that it’s fantasy that deals with pantheons of gods and considers the nature of belief/religion. My latest title is The Book of Angels. It’s really not too bad. If you don’t like it, I’ll buy it back off you.

Well, there’s this ideas shop through the fog at the end of Old Compton Street. You can’t miss it. No, I actually get ideas from my head. Isn’t that how everyone gets their ideas? But your brain needs fuel or raw material to process, so I read tonnes of fantasy. I’ll sometimes read something and think: ‘Hmm, that’s not very good – I wouldn’t have written it like that – I’d have written it like this – oo, that’s a good idea, maybe I will write it like that!’ It’s not copying, it’s like writing the photo-negative of what you’ve read. Hope that makes sense.

Well, I tend to think an author can only write what they know. If they describe particular emotions, therefore, then they need to understand that emotion in such a way that they’ve either experienced it themselves or they’re capable of it. What that means is that if you combine all the characters in my book, then you might get an approximation of me. If I had to choose one, it’s probably Torpeth, the crazy naked holy man from Empire of the Saviours.

I’ve taught English-As-A-Foreign-Language for twenty odd years. I’m a bit of an expert on Anglo-Saxon v. Latin. I’ll select affixes from various words and fudge them together usually. Long Latinate names are used for civilized oppressors/elites and short Anglo-Saxon names are used for the rougher oppressed peoples.

Hmm. I tend to write a chapter as a story arc in itself. There will be a moral dilemma, an attempt to tackle the dilemma and then a showdown and outcome (usually a bad one until the last chapter). I don’t plot out each chapter really, as I believe if you create a good character and give them an interesting predicament, the character will write the story for you. I have a range of characters who ultimately bump into each other and have to thrash out their differences. Then they all come together at the end. It’s a very episodic approach, sure, but I think life’s like that. Mine is, anyway. I write long-hand, with a pen! If you’re not familiar with what a pen is, check it out on Google. It’s very useful technology, a pen. My first draft is all but final draft, although I make slight edits as I type things up.

I love the gothic darkness of Christopher Marlowe – he wrote Doctor Faustus, etc. I prefer him to Shakespeare, actually. I’m not the biggest fan of Tolkien – sorry if that’s blasphemy. Tolkien is all very worthy, but a tad ponderous. No, I grew up reading Raymond E. Feist’s Magician. And I’m a friend of his on facebook. I’m sooo not worthy!

I would meet Christopher Marlowe and ask him what he did to end up with a knife in his eye in a pub in Deptford. I’d also ask him if he’d ever seen a demon, as he was one of the first writers describing such beings. Apparently, when one of his plays was performed back in the late 1500s, an ‘extra’ unscripted devil appeared on stage, and everyone thought it had to be the real thing conjured by accident. Many books I’ve written, like Necromancer’s Gambit, have demons in them, and I’m fascinated by the idea of them.

For sure. I blame the parents myself. It’s when I was given Feist’s Magician at the age of 15 that I decided the fantasy genre was for me.

I sent my first manuscript to a publisher at the age of 15. It was derivative pish (called ‘Elven Sacrifice’ or something), but we’ve all gotta start somewhere. Over the years, I tried with seven different books, and didn’t really get anywhere. But I was getting better, and I’d developed some very good ideas, ideas I recycled much later on. My breakthrough was at 39, with Necromancer’s Gambit. I kind of got lucky. It had a black cover when every other author was copying Trudi Canavan’s white book covers. Then six months after Necromancer’s Gambit came out, Twilight hit the cinema and ‘dark fantasy’ was born. My sales rocketed. It was luck, but you kind of make your own luck too.

Well, I’ve done The Book of Orm and The Book of Angels for Kristell Ink Publishing in the last few years. The follow-up, called The Book of Dragons, should be out April 2017. Also, my PhD on the sub-genres of fantasy is being published by Luna Press Publishing at about the same time.

Beyond that, I have a couple of novels being considered by publishers. One is a scifi called Lifer and the other is a fantasy called Dragon God. Not sure if a publisher will take them on, but if they have any sense they will.

My website is www.ajdalton.eu and people can contact me through that. I also provide on the site lots of advice to aspiring authors (as I teach Creative Writing) and commentary on fantasy publishing. Or I’m on Twitter as @AJDalton1… or on facebook as Adam Dalton. Happy days!

Many thanks to Adam for answering my questions! 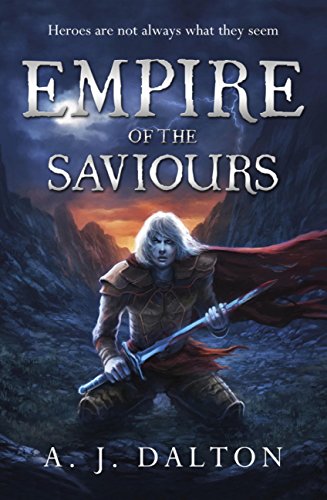 In the Empire of the Saviours, the People are forced to live in fortified towns. Their walls are guarded by an army of Heroes, whose task is to keep marauding pagans out as much as it is to keep the People inside. Several times a year, living Saints visit the towns to exact the Saviours’ tithe from all those coming of age – a tithe often paid in blood.

When a young boy, Jillan, unleashes pagan magicks in an accident, his whole town turns against him. He goes on the run, but what hope can there be when the Saviours and the entire Empire decide he must be caught?

Jillan is initially hunted by just the soldiers of the Saint of his region, but others soon begin to hear of his increasing power and seek to use him for their own ends. Some want Jillan to join the fight against the Empire, others wish to steal his power for themselves and others still want Jillan to lead them to the Geas, the source of all life and power in the world. There are very few Jillan can trust, except for a ragtag group of outcasts.

His parents threatened, his life in tatters, his beliefs shaken to the core, Jillan must decide which side he is on, and whether to fight or run … 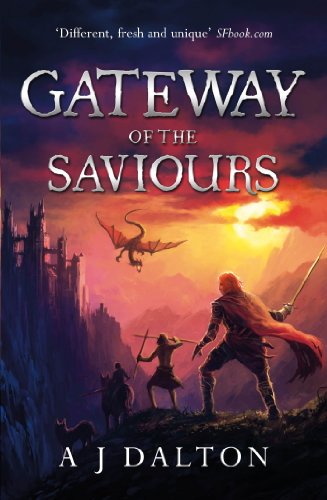 In fear for his life, a young member of an evil race flees his home…

An uneasy peace has settled upon Jillan’s remote corner of the Empire, but he cannot return to his previous simple life. Tricked into a bargain with the manipulative God of Mayhem, he is forced to embark upon a journey that will leave his hometown undefended. Unsure of his fellow travellers, pursued by assassins and spies, he must discover the means by which to raise up the old gods and defeat the cruel Empire of the Saviours.

Meanwhile, the Empire’s vast army of Saints and Heroes descends upon Godsend. Jillan’s beloved Hella and a few loyal companions resist the dark magicks used against them for a while, but the Saviours cannot allow such resistance to go unpunished…

And from another realm, the Declension watches. Their servants, the Saviours, have suffered setbacks. The God of Mayhem is loose. A young boy with wayward powers is on his way to Haven, where he may find a way to destroy them. A renegade member of their race is rampaging through their realms.

Everything is going to plan. 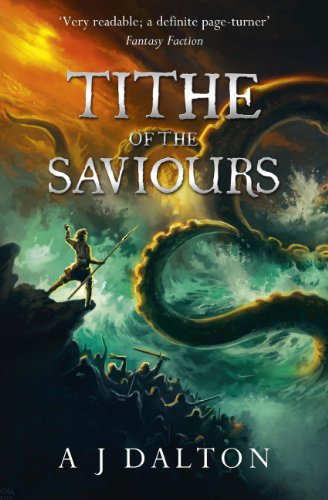 The gods will see you brought down…
The spirits of your ancestors will have their revenge upon you…
The Saviours will drain you of your very soul.

In claiming a place in the world, mortals have won many enemies for themselves. The ancient gods are jealous and conspire against them. The King of the Dead looks to lead his armies into the land of the living. In their own realm, the mighty Declension watches and waits, as events begin to unfold precisely as they had always planned.

Jillan and his companions are beset on all sides, yet are plagued by self-doubt and internal division. When the final battle for survival begins, both they and their gods face extinction. They are easy prey for the warriors of the Declension, who are intent upon stripping Jillan of his magic and raising up their empire once more.

His friends and beloved Hella taken from him, Jillan is captured and tortured. He is ultimately broken and condemned to work in a mine, to see out his days labouring in misery for the enemy he has fought against his entire life.

He is a man without hope.

Would you want to be an angel? The pay’s terrible and you get nothing but complaints from dissatisfied mortals.

2 thoughts on “Q&A with author, A J Dalton @AJDalton1”