Today I am thrilled to welcome Anna Franklin Osborne 🙂 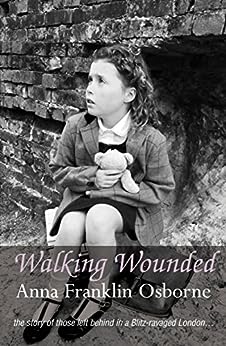 I am a new author but also a chiropractor, teacher, singer, mother and wife, not necessarily in any discernible order! In a determined attempt at a (spectacularly early) mid-life crisis, I joined a wonderful choir, and now sing with the fabulous, Bournemouth-based choir, ‘Chicken Soup.’ This helped me explore my more creative side, but as I haven’t picked a paint brush up since I was about 6, I felt that writing could be my outlet. I began with late night typing into the note section of my smart phone, resulting in a severe case of RSI and several short stories, but Walking Wounded is my first novel.

The idea for the book, a war story and family saga based on family folklore mainly from my mother’s side of the family, was born whilst walking on a D-Day beach waiting for a ferry back to England after a camping holiday in France, describing to my children the events of D-Day, and how three of my great-uncles stormed that very beach, while paratroopers jumped with silk parachutes that my grandmother had toiled laboriously to stitch. I always said ‘I couldn’t write a novel’ and that short stories were ‘more my thing,’ but my husband Neil looked at me that day and said – ‘well there’s your story.’

The story focuses on those left behind whilst their men folk went to war, how they survived and how their relationships evolved through periods of violence, loss and reunion. It is a very personal story set upon a world stage whose history has shaped us all through its effect on our close relatives in the generations above us.

It spans the period from the Armistice of the First World War to the exodus of the Ten Pound Poms to Australia in the 1950s. It is a family saga whose internal violence is mirrored by the world stage upon which it is set, but what I hope shines through is a story of courage and survival.

Walking Wounded was launched in October, and is available to order through www.goosewingpublications.com, Amazon, and all good bookstores.

Mostly from my mother’s family, but also taking poetic licence and picking stories from my father’s side too. What I find fascinating about this period of history is that it is still so tangibly close. We all have stories, even now, of what people really quite close to us did in the Second World War, it is a history which still touches us all.

Yes, very much so. They are all figures from my fairly immediate ancestry, May, for example, was my gran, and Lydia my fabulous ‘Auntie Lil.’ Lots of the events were true, but I blended the story with fiction as there was lots I didn’t know, and lots that I could certainly never ask. The violence, for example, was true (although I don’t really know the details) and I wanted to explore the different kinds of courage – what makes you brave enough to stay? What makes you brave enough to leave??

Again, some were real, some were a mix of family names from that era. I am struggling now with my next book on this one! I HAVE to like the name, and it HAS to mean something to me!

I wrote Walking Wounded in the car, on the school run. I have kids and 2 jobs, so I have to write around the edges… the only unspoken-for time in any given day was the time I spent parked in the school car-park waiting for my kids to emerge- so I bought a tiny tablet and typed furiously for 10 minutes every day for 2 years… in fact, my tiny ‘office’ is about to be featured in the March edition of Prima magazine!! I am trying to reinvent my writing time now though, as my daughter now exerts the right to walk home and I’ve lost my tiny window of time… but I have just bought a little camper van and I hope to type the next book parked by the beach with my dogs at my feet and a coffee at hand. That’s where I am now, typing this!

I really find this a difficult question, I love so many different genres!

But if I look at which books I have bought the most of, then it woudld be Patrick O’Brian ( I live in the past, especially in the Navy around Nelson’s time!), Jodie Picoult, Cecilia Ahern, Louis de Bernieres and Julia Donaldson (my kids and I can recite the Snail and the Whale word-perfect).

Isabelle Broom, and ‘can I come with you, please?’

I have just read A Year and A Day, then immediately after that, I read ‘My Map Of You.’ Not only did I love the stories, but she made the places so real that they felt like travel guides but without the boring bits! I would very much like to go wherever she deems it important to write about!

Massive, to the exclusion of all else. I blame Enid Byton, I was hooked early. This got to the point that my parents got quite worried – each week I was allowed to read a book of my choice and one of theirs ( I think they were trying to slow me down and also hoping to bore me a bit so that I might go out and actually play with my friends) so I read Anna Karenina at the age of nine… it didn’t stop me, though! It’s possibly the reason I read anything and everything now.

Tortured poerty as a teenager, then nothing until I was 44.

Any of Anita Shreve’s! I love her writing but the endings are always so desperately traumatic – to the point that I have repressed them, and although I can remember the stories, I simply cannot recall any of the endings! Beautiful, beautiful writing but so, so sad – not like me to only read a book once but I am afraid to revisit these!

yes – my next one!! I just want to get on with it and I am champing at the bit – I am so frustrated that I am not finding the time right now! I urgently need to win the lottery so I can give up my day job and just immerse myself in it…

Stephen Maturin, of Master and Commander fame. I love this sensitive, witty, complicated character. I would take him to my sailing club and try to explain the ‘weather gage’ to him, just as Jack Aubrey tried to do, so many times.

Theoretically, my next book – historical fiction again. But honestly? I am focussing on trying to rearrange my life a little to make more time…

Walking Wounded took me 3 years from the idea through to publication. Realistically, I am just going to plug away – being an Indi publisher and having day jobs, at least I don’t have a dead-line, although in some ways I probably need one..

I’d love people to stay in touch! Probably the best way is through FB on GooseWing Publications, but I am also getting to grips with Twitter and my handle (is that really what it’s called?!) is @HomeOsborne

Yes – my 11 year old daughter is my cover model (she cost a hot chocolate and a muffin) and my 13 year old son created my website, www.goosewingpublications.com. This cost a little bit more. I seem to have spawned rather fabulous children, for which I may also thank my lovely husband, Neil!

I’d just love you to read Walking Wounded. It is a scary feeling, putting out not only your first book but a departure from treating patients and my teaching… I badly want it to be enjoyed!

Thank you for taking the time to answer my questions, Anna 🙂

Born at the end of the First World War, a young girl struggles to find her own identity in her big family and is pushed into a stormy marriage through a terrible misunderstanding from which her pride refuses to let her back down. As her own personal world begins to crumble, the foundation of the world around her is shaken as Germany once again declares war and her brothers and young husband sign up with the first wave of volunteers.
Walking Wounded tells the story of those left behind in a Blitz-ravaged London, and of the web of loyalty, guilt and duty that shapes the decisions of the women awaiting the return of their men-folk as the war draws to a close.
Spanning the period from the Armistice of the First World War to the exodus of the Ten Pound Poms to Australia in the 1950s, Walking Wounded is a family saga whose internal violence is mirrored by the world stage upon which it is set.

One thought on “Q&A with author, Anna Franklin Osborne @HomeOsborne”