I am very happy to be today’s stop on Linda S Prather’s The Forgotten blog tour! 🙂 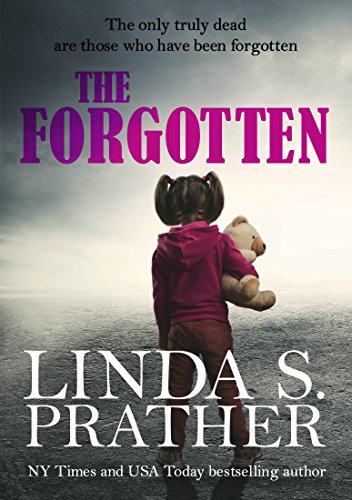 Loki Redmond is positive her grandfather’s 100 acre farm in Mississippi will be the perfect place for Jake Savior to heal after the murder of his wife and his banishment from law enforcement before they begin their partnership in Redmond Private Investigations.

But fate has other plans.

The discovery of a month old baby and young girl with no memory of her name, running from a man she calls The Devil, plunges them into danger. Loki’s Native American connection to the spirits makes her a target for the delusions of a madman who is determined to kill her.

Tension continues to rise when a special unit of the FBI enters the case, and Jake is forced to decide what he believes in. Can he change the future seen by Special Agent Brian Wilkes, or is Loki destined to die?

The room gradually chilled as dusk turned into night, enclosing them in the comfort of darkness.

The baby stirred and whimpered, and the young girl held her close, cradling her in her arms. “Shhh…” she shushed as she rocked gently back and forth. “We mustn’t wake Husband or Mother.”

Her gaze went to the bedroom door, her heart pounding and her thoughts muddled by the conversation she’d overheard. Her lower lip trembled as she whispered, “Husband is going to take a new bride, Hope. He told Mother he was leaving in the morning and would return before nightfall.”

She shuddered as an image of Isabella’s battered and bloody body crept into her mind. In less than a week, he would come for the child, and soon thereafter he would come for her, and two more graves would line the banks of Devil’s Creek.

That’s why the old woman has been starving me since the baby was born. She wants me weak so I can’t fight when she comes to take Hope. And even if I try to run, I won’t get far.

Holding the baby closer to her heart, she brushed her lips against the soft skin of her cheek and rolled onto her side as she searched for memories of her own mother. Her real mother, not the old bitch Husband forced her to call Mother. The effort caused an immediate headache. They had stripped her of everything over the years—even her own name.

“You’re the best thing that ever happened to me,” she whispered. “They told me I couldn’t name you, but I did. I called you Hope because that’s what you gave me.” Hope snuggled against her. “I’ll find a way to save you.”

A light snow was falling outside the window, and the temperature in the room continued to drop. God, if there was one, would show her the way to save the baby. She’d prayed for three years to die, and instead He’d given her a reason to live. A real God wouldn’t do that unless He had a plan, would He?

She closed her eyes and willed herself to sleep. With Husband gone, tomorrow would be the only chance she’d have to escape. Even if they froze to death, at least they’d be together, and freezing would be less painful than the torturous death the devil had planned for them.

WOW! Make sure you read the next part (Chapter 1) tomorrow over on baattyaboutbooks.wordpress.com

As a reader who follows specific authors, and loves their characters I’ve often wondered what would my readers like to know about me? It was easier with my published book as I met many of those readers and spent time talking with them, answering their questions, and getting to know them. I actually made several wonderful friendships through those endeavors and we still stay in touch by email. EBook sales are substantially different in that I rarely, if ever, meet my readers now. And I miss that. I miss that one-on-one contact of discussing writing, characters and life in general.

One of the most often questions asked is: are any of my characters a part of my own persona. Well, yes, many of them are. Let’s take a look at Sacred Secrets, the prequel to The Gifts.

Katie has lived the majority of her life on “death row”. Knowing that without a heart transplant she would die. I too was told early in life that without a pancreas transplant my days were numbered. After being placed on the transplant list my doctors discovered that I was allergic to the medications I would need for the operation. The surgery itself would kill me. So I know what it’s like to “be on death row”. And my short time on the transplant list is responsible for my interest in cellular memory.

Billy Dawson, the Dream Weaver. An interesting character. Torn between what he believes to be right, and his obligations. Don’t we all feel that same soul searching crisis throughout life?

Miss Charity, my own deep scars and wounds. Which, I hope you’ll forgive me I prefer not to share.

Those are just a few of my favorite characters in Sacred Secrets, which I believe are a part of my own persona.

As Sacred Secrets is the prequel to The Gifts, I did sort of a Star Wars on myself. In The Gifts Gavin and Jacody are no longer totally separate. They function as one, although not totally one.

Sarah, the town Sheriff, like Gavin has what her grandmother called “The Gift”. To Sarah it has always been more of a curse. Like Gavin, she dreams things. Things that happen. And therein lays her frustration. There’s no way she can ever know if what she dreamed is real until it happens, and then it’s too late to do anything about it. What kind of gift is that?

Nikki, Sarah’s five year old daughter reminds me of myself at her age. Yes, even then I was a little weird in the fact that I sometimes saw things or dreamed things that later I found out really happened.

I would love to believe that I have many of Millie’s charming characteristics. I know I have her propensity to feel that trust is essential in a relationship, and that without that trust nothing else matters.

When I started writing The Jacody Ives Mysteries I knew I wanted to write traditional mysteries to keep the reader guessing until the very end. I’ve been told many times that I accomplished this with The Gifts. The jury is still out on Sacred Secrets and I’ll have to wait for reader’s reviews to know if the twist at the end was enough. I will have to say it shocked me, as many times my characters go off in directions I had no idea they were going to take.

So now you know a little more about me, and my characters.

Make sure you catch up with, and follow, the rest of the blog tour…..