I am thrilled to welcome Sheryl Browne today 🙂

Sheryl is the author of the new DI Matthew Adams series, as well as many other books.

Without being too boring you mean? Okay, here goes. I’m a keen boater. I do strange things occasionally like skydiving from 20,000 feet. I’m a mother and I also foster disabled dogs, most of which I inevitably end up keeping. I write contemporary fiction and psychological thriller (apparently I have a scary insight into the mind of a psychopath. Thank you Rachel at Rachel’s Random Reads. I’m flattered … I think). I’m a member of the Crime Writers’ Association the Romantic Novelists’ Association and have several books published, along with two short stories in Birmingham City University anthologies where I completed my MA in Creative Writing, finally. Life, what can I say?

I think the blurbs describe my new psychological thrillers perfectly, but to sum up:

Are you ready to take a journey into the mind of a madman?

Sins of the Father.

All-consuming thrillers that will eat you and spit you back out.

People inspire me, and the whole gamut of emotion that comes with them. I tend to gravitate towards family and family dynamics and just how strong a family unit can be. A writer’s mind thrives on exploration. Every scenario, every face, every place tells a story. A glimpsed situation, an argument between a couple, for instance, which came into play in Sins of the Father, a verbal ‘slanging match’ in the street, and you have your stimulus for a story, upon which your overzealous writer’s mind will weave fictional facts. You simply can’t help yourself.

As mentioned, above, the ideas for my book are often based upon some witnessed scenario. Mulling them over at night, as writers tend to, I wake up and there’s a fully-formed character in my head who won’t let me go. He, or she, calls to me. They are what they are (good or bad) and I have to follow them. With my latest thrillers, DI Matthew Adams simply appeared, along with his flaws and traits. He was a family man, I knew this immediately, and the core of the story was his need to protect his family, inevitably therefore his family was under threat. So, while my characters might not be based on people I know intimately, they are based on people I’ve met.

Again, as mentioned, they come fully formed. I have no idea how or why, but they are already Christened.

With my ragtag family of disabled dogs, my mornings are pandemonium. I rise at six and try to get emails out of the way and have a quick dip into social media. Then it’s dog feeding, medication and walking time and thereafter back to my keyboard. I try to devote the daytime to writing and then go back to social media in the evening. Sometimes very late in the evening. Oh, and I fit the odd bit of housework in there somewhere.

I love Stephen King. Who could ever forget Misery? Unsuspecting, injured author held captive by a psychopathic and very angry fan? What a simple and truly fabulous premise. Martina Cole, too. Her books were a huge influence on me and the inspiration behind my desire to delve into the darker psyche of some of my characters. A book that stays with me is The Ladykiller. It’s with morbid fascination you glimpse into the mindset of a sexually depraved killer. I’m currently reading The Safe Word (Eleanor Raven series Book 1) by Karen Long. Before that Little Girl Lost by Carol Wyer. With both of these books, the opening had me hooked immediately. I can’t help but admire that in a writer, so they’re fast becoming favourites. Lastly, he’s not a thriller writer, but there are definitely policemen involved: John Donoghue. His book, Police, Crime & 999 – The True Story of a Front Line Officer, is totally hilarious. His other books, Police, Lies & Alibis, Shakespeare My Butt and Police, Arrests & Suspects are similarly screamingly funny. Pure therapy.

Martina Cole. Q: Does (one of my books) work for you? Failing that, John Donoghue, because I think he’d make me laugh my socks off.

Yes, but I think I found the reading/writing bug around about the time I read A Kestrel for a Knave (Kes) by Barry Hines, a coming of age novel which tells the story of a young Yorkshire boy, Billy Casper, who finds solace from a life of bullying and neglect by rearing a wild kestrel he calls Kes. The book is set in the 1960s but there’s a wonderful timelessness to the story. This book certainly fired my childhood imagination.

Can I choose a screenplay, Thelma and Louise, an enduring classic written by Callie Khouri? Two women walk away from their lives of drudgery and relationships with indifferent men to hit the road and ‘find themselves’. The ending was superb: pursued by the authorities and facing certain prison, they consciously ‘keep on going’ over the edge of the Grand Canyon. Sadly, it couldn’t have ended any other way. The women found themselves. They discovered who they were and were never going to allow themselves to be stifled ever again, but I would so like to have seen them endure.

Any one of Martina Cole’s books.

I have stories coming out of my ears at the moment. As I seem to be in thriller mode, I’m currently working on a book in that genre, working title: Scream for Me (or Out on Licence). Watch this space.

I have a book in edits. Working title, The Edge of Sanity. Another family under threat thriller.

Please find all of my links below my bio. Feel free to contact me via my website, Twitter, Facebook or email. I love to hear from readers and am always happy to answer questions. You are the true inspiration behind my writing,

Can I take this opportunity to thank everyone, readers and especially book bloggers for their fantastic support? I say it a lot and I truly mean it: I could not do this without you. THANK YOU!

Thank you for taking the time to answer my questions, Sheryl 🙂

Thank you so much, Kerry, for indulging me. X 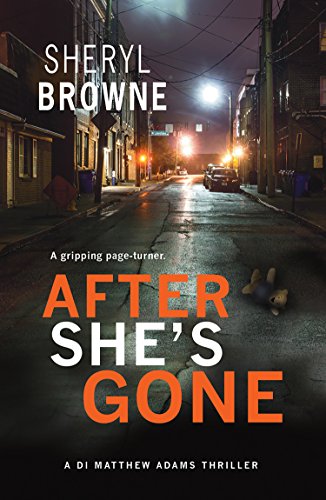 He’s killed your child and kidnapped your wife. What would YOU do?

There’s evil and then there’s Patrick Sullivan. A drug dealer, pimp and murderer, there are no depths to which Patrick would not sink, and Detective Inspector Matthew Adams has found this out in the most devastating way imaginable.

When Patrick’s brother is shot dead in a drug bust gone wrong, the bitter battle between the two men intensifies, and Matthew finds it increasingly difficult to hold the moral high ground. All he wants is to make the pimping scum suffer the way he did … the way Lily did.

But being at war with such a depraved individual means that it’s not just Matthew who’s in danger. Patrick has taken a lot from Matthew, but he hasn’t taken everything – and now he wants everything. 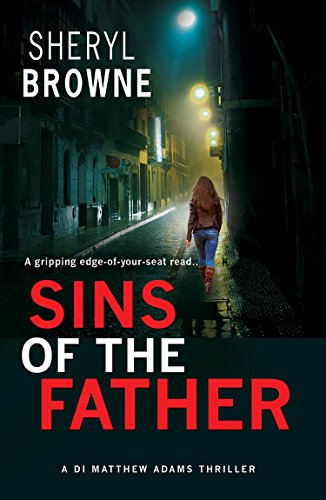 Sins of the Father

What if you’d been accused of one of the worst crimes imaginable?

Detective Inspector Matthew Adams is slowly picking up the pieces from a case that nearly cost him the lives of his entire family and his own sanity too. On the surface, he seems to be moving on, but he drinks to forget – and when he closes his eyes, the nightmares still come.

But the past is the past – or is it? Because the evil Patrick Sullivan might be out of the picture, but there’s somebody who is just as intent on making Matthew’s life hell, and they’re doing it in the cruellest way possible.

When Matthew finds himself accused of a horrific and violent crime, will his family stand by him? And will he even be around to help when his new enemy goes after them as well?

A member of the Crime Writers’ Association, Romantic Novelists’ Association and awarded a Red Ribbon by The Wishing Shelf Book Awards, Sheryl has several books published and two short stories in Birmingham City University anthologies, where she completed her MA in Creative Writing.

Recommended to the publisher by the WH Smith Travel fiction buyer, Sheryl’s contemporary fiction comes to you from multi-award winning Choc Lit.