Today I have the pleasure of taking part in the blog tour for Hitler’s Forgotten Children: The Shocking True Story of the Nazi Kidnapping Conspiracy.

Bad Arolsen is a small, picture-postcard town in the heart of Germany. Its main street runs in one perfectly straight mile from east to west, lined by 880 oak trees in strict military formation. Exactly half way down, set back from the road in an unprepossessing piece of post-war architecture, is the one of the most important locations for an understanding of Hitler’s Third Reich. The archives of the International Tracing Service, spread haphazardly over several floors and spilling out into satellite buildings, contain more 30 million individual files recording the fate of those who fell victim to the Nazis’ 12-year madness.

In August 2013 a small, quietly-determined woman came to Bad Arolsen in search of answers to the confusing jigsaw puzzle of her life. Her name was Ingrid von Oelhafen; she was on a journey to investigate one of the darkest and least understood stories of Nazi Germany. The Lebensborn program was an attempt to create a new Master Race of pure-blooded Aryan children, who were to be raised as the future aristocracy of Hitler’s intended ‘Thousand Year Reich’. For more than seventy years Lebensborn had been hidden behind a veil of official secrecy, post-war shame and wild (false) stories of secret breeding stations where SS officers mated with blond, blue-eyed German maidens.

But the truth about Lebensborn was, if anything, even more horrific than the sensationalist rumours. Although it did run secretive maternity homes where Aryan women gave birth to babies, who were then handed over to be raised in the ‘care’ of the SS – “children for the Führer”, as the Nazis termed them – most Lebensborn children were kidnapped into the program.

They were stolen by the SS from families in Eastern European countries which had been occupied by Hitler’s troops. Some estimates claim that up to half a million babies in Poland, Yugoslavia and Czechoslovakia were snatched from their parents and transported to the Fatherland where their true identities were replaced by fictional German ones.

In summer 2013, I travelled across Europe meeting and filming the survivors of the Lebensborn program for a television documentary. Their stories were harrowing: the bravery of their individual journeys into their own origins and the troubled past of Nazi Germany was humbling. Yet even amongst these remarkable accounts Ingrid’s story stood out.

From the age of 11 she had known that Ingrid von Oelhafen wasn’t her real name. She discovered then that her mother and father were actually her foster-parents. Neither of them ever discussed how she had come to their family: for the next 48 years the only clues she possessed to her real identity were a small pink vaccination certificate and a contract handing her over to the care of foster-parents. Both were dated 1944, and bore not her name but that of someone called Erika Matko. One had been stamped by Lebensborn.

Ingrid was 58 years old when, in 2000, she began investigating. By the time we met she had discovered she had been stolen in 1942 from what was then Nazi-occupied Yugoslavia (now Slovenia).

On June 25, Heinrich Himmler – the second most powerful and feared man in Nazi Germany – issued orders to his secret police and SS officers for the elimination of all resistance to the occupation. Partisan fighters were publicly executed; then, in August, the SS ordered families to report to a local school. Johann and Helena Matko were amongst the hundreds of families who arrived at the schoolyard with their three children, Tanja, Ludvig and Erika. Heavily-armed soldiers quickly separated them into three groups: one each for the men, women and children.

Inside the school, SS “race assessors” decided that Erika matched an extensive tick-list of Aryan characteristics: she was taken away – transported hundreds of miles to a Lebensborn home inside Germany. There, officials erased her true identity and subsequently handed her over to a suitably German family: Erika Matko became Ingrid von Oelhafen.

Neither of her foster parents ever told Ingrid about her past: it was only after they died that Ingrid found the vaccination slip and the Lebensborn papers which allowed her to begin investigating her origins.

Television documentaries are constrained by time and the need to explain the big historical picture as well as telling individual stories. By the time I started editing, I realized that Ingrid’s story was simply too big to fit within my Lebensborn film. Her investigation had taken her deep into the dark heart of Hitler’s obsession with race and blood; but it had also required a physical and emotionally-ambiguous journey into the history and geography of Eastern European countries brutalised first by the Second World War and then by the Cold War.

And so, with a heavy heart, I apologized to Ingrid for leaving her story on the cutting room floor, but asked instead if we could tell it in the less circumscribed form of a book. Neither of us knew, as we began writing in 2014, that her journey had not ended. When she travelled to modern-day Slovenia she obtained scientific confirmation that she was Erika Matko and met the remnants of her family. But she also made a terrible final discovery: that there was another Erika Matko – a baby who had been handed by the Nazis to her parents as a substitute and who had ever since lived the life which would have been Ingrid’s but for her kidnaping by the Lebensborn program.

I have, over almost 40 years, been lucky enough to travel the world, making more than 80 films and writing thirteen books. Few of the people I have met affected me as much as Ingrid. Her courage and quiet determination to investigate some of the darkest times in modern history and find the truth about who she really is are – quite literally – inspiring. I am deeply privileged to know her – and proud that our book, “Hitler’s Forgotten Children”, has now been published in ten countries and several different languages.

Details of all of Tim’s books – as well as viewable copies of many of his films – can be found at http://www.timtate.co.uk

Wow, I think shocking is an understatement. I’m fascinated and I will be reading this book asap. Many thanks to Tim Tate for taking the time to write this piece and to Alison Menzies for the opportunity to be a part of this blog tour. 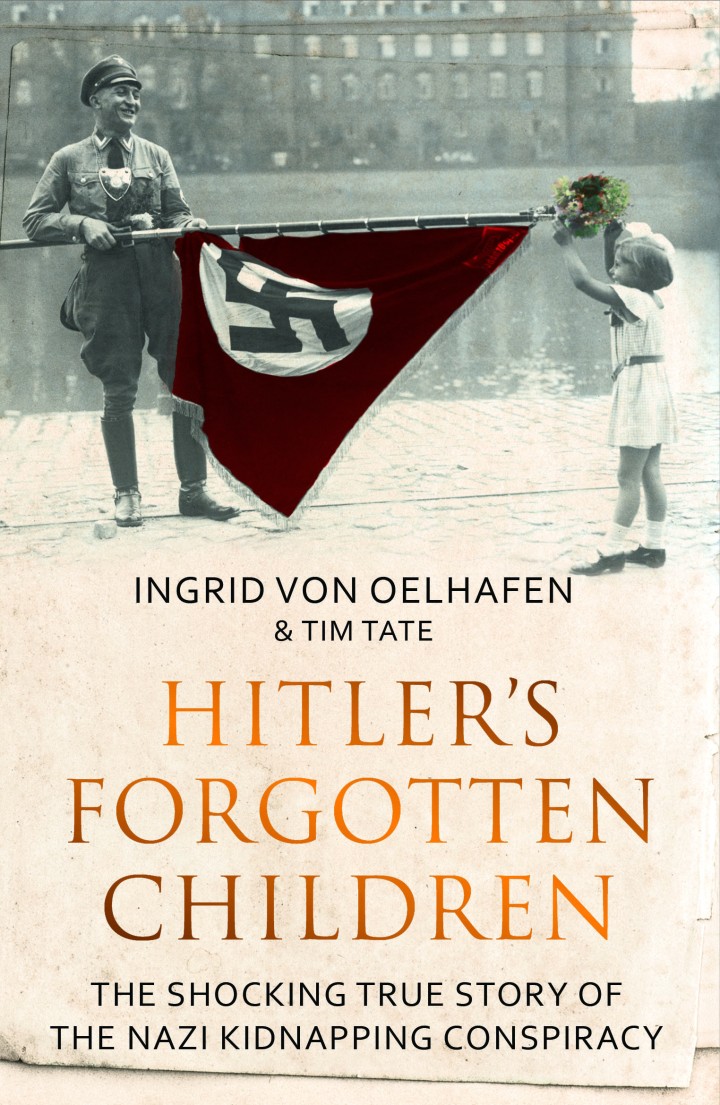 ‘More than 70 years ago I was a “gift” for Adolf Hitler. I was stolen as a baby to be part of one of the most terrible of all Nazi experiments: Lebensborn.’

The Lebensborn programme was the brainchild of Himmler: an extraordinary plan to create an Aryan master race, leaving behind thousands of displaced victims in the wake of the Nazi regime.

In Hitler’s Forgotten Children Ingrid von Oelhafen shares her incredible story as a child of the Lebensborn: a lonely childhood with a distant foster family; her painstaking and difficult search for answers in post-war Germany; and finally being reunited with her biological family – with one last shocking truth to be discovered.

Ingrid von Oelhafen is a former physical therapist living in Osnabruck, Germany. For more than 20 years she has been investigating her own extraordinary story and that of Lebensborn. She is in contact with other Lebensborn survivors and has been invited to give talks in schools about the programme and its effects on those who were part of it.

Tim Tate is a multi-award-winning documentary filmmaker and author. In 2013 he produced and directed Lebensborn: Children of the Master Race, which was broadcast on Channel 5. He is the author of twelve books, including the best-selling Slave Girl (John Blake, 2009).