I am thrilled to be joining in with Paul Mathews’ We Have Lost The Coffee blog tour! 🙂

Many thanks to Emma Mitchell for the opportunity to take part.

We Have Lost The Coffee will be released on 28th June and is available to pre-order now!

Did your writing skills come natural or did you have to attend courses to help you develop that creative side?

I’ve had a creative streak for as long as I can remember. I loved reading the classic comics of the 1970s and 1980s: The Beano, Dandy, Whizzer and Chips, Whoopee etc. And I started writing and drawing my own comics from the age of 11-years-old. It was very time-consuming, and involved plotting stories and planning each frame. But, when I think about it, it was great practice for writing a novel: creating characters, devising a storyline and writing dialogue.

I also enjoyed choose-your-own-adventure books as a kid (which involved making decisions, rolling dice and battling monsters) and wrote a couple of my own, which I loaned to school friends.

I was also a member of my primary school drama club. And in my late 30s, I acted in a local amateur dramatics group and that helped me enormously to understand what works and what doesn’t in dramatic terms.

Before I became an author, I wrote plays for amateur production and did a lot of research about story structure, characters, plotting etc. And writing plays taught me how to write good dialogue, which is a central part of all my books. Writing a novel was a progression from those years of writing stage plays.

So, it’s been quite a long journey!

What books/authors inspired your writing journey?

I read Douglas Adams’ Hitchhiker’s Guide to the Galaxy series as a teenager and loved it. I try to carry over some of his quirkiness into my work. I also include lots of references to the number 42. You’ll see We Have Lost the Coffee has 42 chapters – that’s not a coincidence!

I also enjoy John Farrell’s comedy novels. He employs fewer characters than me, and more one-liners, but our sense of humour is very similar.

How does it feel to know that your books inspire others? Whether readers with a response to the content or other aspiring authors?

I’m not sure if I’ve inspired anyone – if I have and you’re reading this, please get in touch! My main motivation is to entertain people and make them laugh. I know from all the Goodreads and Amazon ratings that the majority of my readers are happy bunnies and that’s what counts.

Do you have any writing rituals? What are they?

I try to write a chapter in a day (about 2,000 words), when I am in full novel-writing mode and then I stop – unless I’m nearing the end of the novel and then I might squeeze out a few more words. I usually plan a couple of months with a break when I’m about halfway through. I do this Monday to Friday and then take a timeout at the weekend. I’m not a believer in the ‘write something every day’ mantra. You need days where you switch off and get away from it all.

If you could have written any literary character, who would it be and why?

Marvin the Paranoid Android from the Hitchhiker’s Guide to the Galaxy – his depressive take on life is just so comically British. Only an Englishman could have created a robot that is so permanently cheesed off with the universe!

Within your genre, is there a subject that you would never write about? What? Why?

I would never write about something that wasn’t funny. No point making your own life difficult! 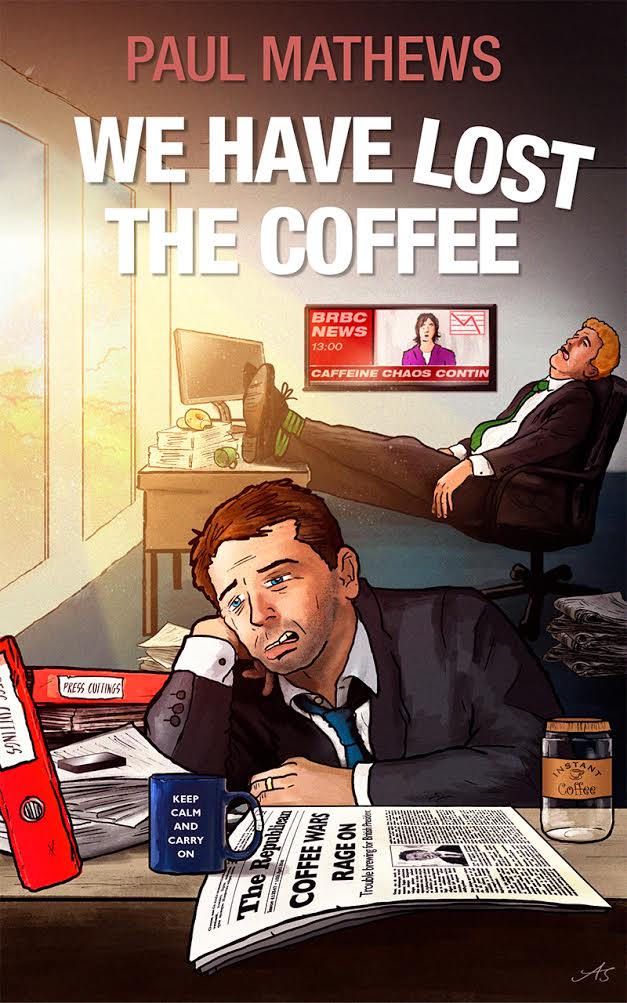 London, 2045. Three months into the Coffee Wars and Britain’s caffeine supplies are at critical levels. Brits are drinking even more tea than usual, keeping a stiff upper lip and praying for an end to it all.

A secret Government coffee stockpile could save the day … but then mysteriously disappears overnight.

One man is asked to unravel the missing-coffee mystery. His name is Pond. Howie Pond. And he’s in desperate need of a triple espresso. Meanwhile, his journalist wife, Britt, is hunting royal fugitive Emma Windsor on the streets of the capital.

Can Howie save the British Republic from caffeine-starved chaos? Will the runaway royal be found? And just what will desperate coffee drinkers do for their next caffeine fix? Find out, in Paul Mathews’ latest comedy-thriller set in the Britain of the future…

‘We Have Lost The Coffee’ is packed with dry British humour, political satire, dozens of comedy characters and enough coffee jokes to keep you awake all night. It’s full of crazy action and adventure in London, and beyond, and is guaranteed to set your pulse racing faster than a quadruple espresso.

So, join Howie, Britt and friends – as well as some enemies – as you travel forward in time to 2040s London.

For your chance to win one of two e-book copies…..