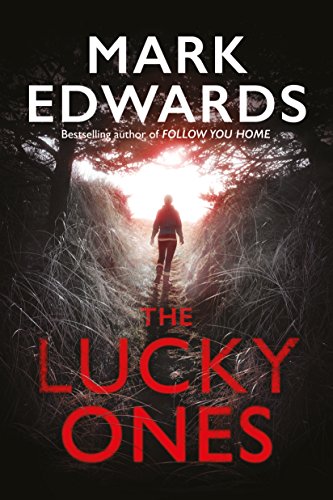 It was the happiest day of her life. Little did she know it was also the last.

When a woman’s body is found in the grounds of a ruined priory, Detective Imogen Evans realises she is dealing with a serial killer—a killer whose victims appear to die in a state of bliss, eyes open, smiles forever frozen on their faces.

A few miles away, single dad Ben Hofland believes his fortunes are changing at last. Forced to move back to the sleepy village where he grew up following the breakdown of his marriage, Ben finally finds work. What’s more, the bullies who have been terrorising his son, Ollie, disappear. For the first time in months, Ben feels lucky.

But he is unaware that someone is watching him and Ollie. Someone who wants nothing but happiness for Ben.

The Lucky Ones is the terrifying new thriller from the #1 Kindle bestselling author of Follow You Home and The Devil’s Work.

I was so excited when I received an ARC of this book from the publisher (Thank you!), especially as it was a total surprise! I was disappointed to have been unable to read it until now, but wow! It was totally worth the wait!

Mark Edwards is a natural storyteller. I have loved every one of his books I’ve read so far and this was no exception.

The Lucky Ones is a psychological thriller, but this serial killer is quite different. He likes to make his victims happy! This makes him even creepier than your average psychopathic murderer. You’ll know what I mean if you’ve read it already. If you haven’t, you’ll find out. There are some chapters written from the perspective of the killer which really did make my skin crawl.

One of the main characters, Ben, is very likeable. He’s recently separated from his wife and has custody of their young son, Ollie. When things finally start to look up for Ben and Ollie, he has no idea of the danger he is facing, until Detective Imogen Evans discovers that he may be the next victim and vows to protect him.

There are so many twists and turns in this story I almost felt exhausted for Imogen and her team, racing against time to find this murderer before anyone else got hurt. There are far too many people who have lost their lives at the hands of this killer already.

It is far from straight forward and although the story unfolds a bit more gradually at first, allowing me to get to know the characters, making me question everything and suspect pretty much everyone, the pace seriously picks up before long and I couldn’t read it fast enough to find out if they got there in time. My heart was beating so fast towards the end. Gripping is an understatement!

Outstanding writing, as always. Brilliant characterisation, clever plot, twists galore, fabulous setting (not far from me). It has everything that makes a great read for me. Even a hint of romance! Just brilliant! I highly recommend and I hope this is might develop into an Imogen Evans series!(?)

I write psychological thrillers. My influences include writers such as Stephen King, Ira Levin, Ruth Rendell, Ian McEwan, Val McDermid and Donna Tartt and movies like Rosemary’s Baby, Single White Female, Fatal Attraction and anything in which scary things happen to ordinary people.

I love hearing from readers and always respond. I can be contacted in the following ways:
Email: markcity@me.com
Twitter @mredwards
Facebook: http://www.facebook.com/markedwardsbooks

You can download a free box set of ‘Short Sharp Shockers’ by visiting http://www.markedwardsauthor.com/free

THE MAGPIES (2013) and BECAUSE SHE LOVES ME (2014) topped the Kindle chart in the UK, as did FOLLOW YOU HOME (2015) which also was a top five bestseller in the US, and THE DEVIL’S WORK (2016). My other solo novel is WHAT YOU WISH FOR (2014) and I have one short story, KISSING GAMES, available on Amazon. My new psychological thriller, THE LUCKY ONES, will be published in June 2017.

After a career that has taken in everything from answering complaint calls for a rail company to teaching English in Japan and being a marketing director, I now write full-time.

I live in the West Midlands, England, with my wife, our three children, a ginger cat and a golden retriever.

Please note: there is another author called Mark Edwards. If a title is not listed on my author page, it’s not by me.

4 thoughts on “The Lucky Ones by Mark Edwards @mredwards #BookReview”