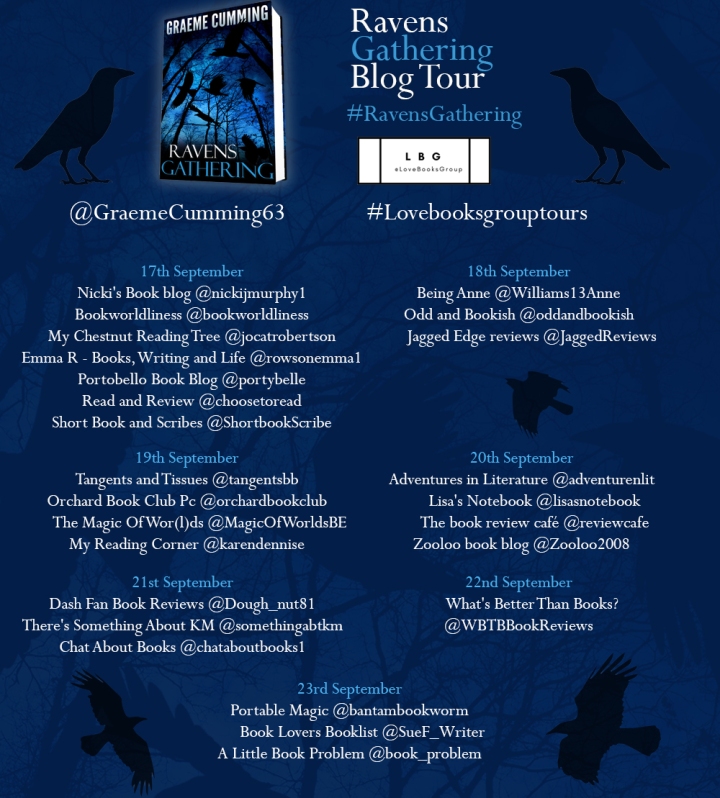 After 20 years running my own business, I sold it last year so I could concentrate on writing full-time. (That didn’t work out quite how I expected, but after 12 months of trying to get into a routine, I’m almost there!)

My interest in story-telling was sparked by an excessive amount of time sitting in front of a black and white television in the ‘60s and ‘70s, which means my influences are varied. This diversity continued with my reading and tastes in movies. As a result, my stories won’t always fall into a specific genre, but will lean towards thrillers.

Ravens Gathering is currently the only book I’ve had published, though three others are at various drafting stages. It should come as no surprise to learn that it doesn’t slot neatly into a genre, but offers the reader suspense, uncertainty, and an array of garden paths to be led up.

Ideas can come from all kinds of places. You spot something and your imagination takes off as you wonder why it happened and what led up to it.

Then again, it can come from a title, which is what happened in the case of Ravens Gathering. I was driving along the A1 and noticed a group of black birds on the hard shoulder, no doubt feeding off some rotting dead animal. As I drew closer, some more arrived and I said: “Did you see those ravens gathering?” Clearly, that didn’t give me a story, but the title led on to it – and a title like that just screams creepy, doesn’t it?

That would be telling, wouldn’t it? Seriously, if they are, it isn’t a conscious thing, though I’m sure some of my own character traits will show up from time to time – and not always in a good way!

I don’t have a system. Some names of characters have been with me for years (even though I haven’t written the stories yet), and I honestly can’t remember how their names were chosen. Others might be inspired by characters from books, or even actors or musicians. The Gates family name came from the singer/songwriter David Gates, and there’s even a firm mentioned in Ravens Gathering that goes by the name Griffin, after James Griffin, who collaborated with David Gates.

That aside, I should say that I am conscious my stories tend to have a lot of characters in, so I do keep a note to make sure I don’t have too many similar sounding names.

Plot it and plan it, including chapter plans. It doesn’t work out exactly how you intended, but it does make the process easier to follow, and you can work out more readily how to lead the reader up the garden path!

That’s difficult to say with complete clarity. Probably the best approach for me to take is to consider which have influenced me the most. And they are:

Ed McBain. And the question would be: how the hell did you churn out a brilliant crime novel every three months?

My second home was the library. Does that answer your question?

As a child. I seem to remember bashing out stories on my dad’s typewriter when I was still at primary school. The first inkling I had that this was something I could take seriously, though, was when I was about thirteen or fourteen. An English teacher gave the class the option to do homework over the Easter break and, instead of the usual two-page essay, I submitted a 15 page thriller. Her reaction to it was the most significant encouragement I’ve ever had. She was clearly enthused, and was later heard to say that, if I wasn’t a published author by the time I was twenty-five, she’d eat her hat. I suspect she had a very high-fibre diet for a number of years as I was fifty by the time Ravens Gathering was published.

I wouldn’t be so presumptuous. Just because I didn’t like an ending doesn’t mean no one else did, and I wouldn’t want to spoil someone else’s enjoyment.

Nicholai Hel, the assassin in Shibumi. I wouldn’t take them for coffee, because I hate the stuff, but I suspect he wouldn’t be too keen either, probably preferring a herbal tea. Still, I might be able to persuade him to try a quiet pint in a local pub.

Carrion. In practice, I’ve been working on versions of it for several years, but I feel like I’m getting close to the point where I’ll be happy to share it with the world. It’s both completely different to Ravens Gathering and yet somehow connected…

Ravens Gathering has been available as an e-book for nearly six years, and paperback for about a year, but it’s still my latest! As I’ve already indicated, it’s a difficult one to define because it doesn’t slot neatly into a genre. I think of it as a thriller, but it has shades of horror, fantasy and crime in it as well. The good news is that most people who’ve read it appear to have gone along for the ride and enjoyed it. I didn’t realise there were so many people who liked their fiction that dark!

Not imminently. I’m expecting Carrion to be the next – but only when I’m satisfied it’s ready.

As there’s only the one book out, I don’t have a standard practice. When Ravens Gathering was launched, it was very low-key, but I suspect I enjoyed a glass of something…

Aside from writing (and reading), I am an enthusiastic sailor, enjoy off-road cycling and walking, and love the cinema. Although my concert-going days are fewer and further between now, I like to reminisce about the multitude of gigs I went to in my younger days. Those occasional reminiscences can be found on my blog.

As well as a passion for the written word, I’m currently Education Director at Sheffield Speakers Club (but I’m not available for weddings, funerals or Bar Mitzvahs!).

Thank you for taking the time to answer my questions, Graeme 🙂 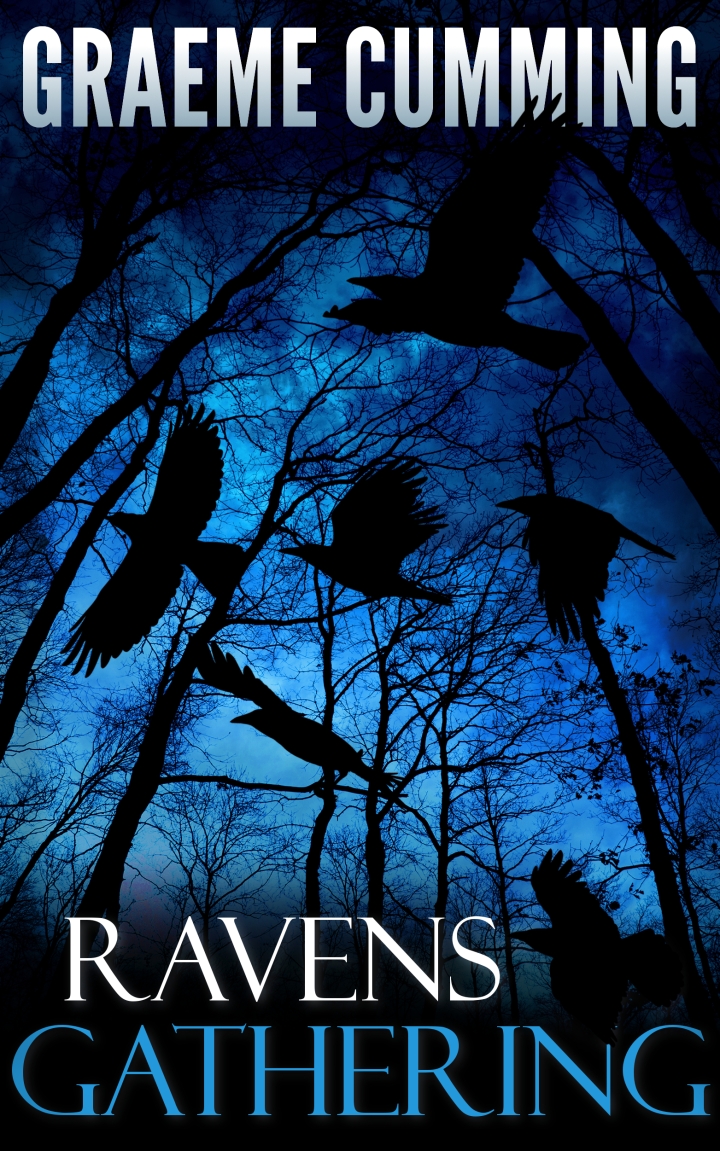 As she let her gaze drift around her, she saw that there were more birds. Perhaps a dozen or so, perched among the trees that stood on the edge of the clearing. And yet more were arriving, swooping down through the gap overhead and landing on branches that overlooked them. The birds weren’t threatening, yet the sight of them all coming together in this dark and isolated spot was unnerving. Tanya reached a hand out towards Martin, and was relieved to feel him take it. She felt him move in behind her. After the uncertainty she’d experienced with him in a similar position only a few moments ago, she recognised the irony of her reaction. His closeness offered security.

A stranger’s arrival in a small village coincides with a tragic accident. For the Gates family in particular it’s more than a coincidence, but unease increases following a brutal attack. As tensions rise, a dark past returns to haunt them and others, while newcomers to the village are drawn into a mystery with terrifying consequences.

And only a select few know why the ravens are gathering.

When not writing, Graeme is an enthusiastic sailor (and, by default, swimmer), and enjoys off-road cycling and walking. He is currently Education Director at Sheffield Speakers Club. Oh yes, and he reads (a lot) and loves the cinema.