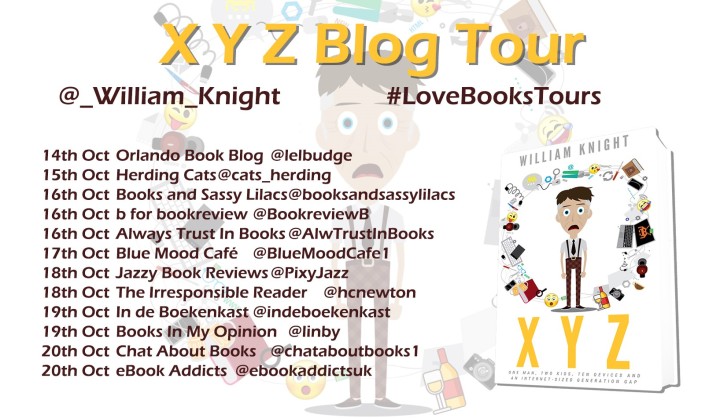 Many thanks to Kelly @ Love Books Tours for arranging the following interview with William Knight….. 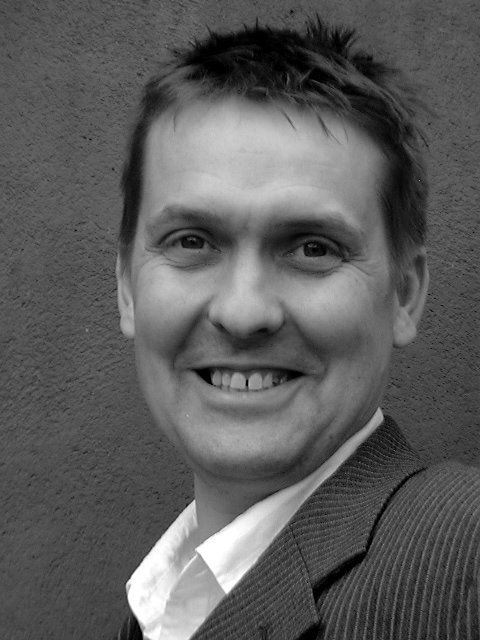 For those who don’t know already, could you tell us about yourself and your book(s) please?
Rather like the character Jack Cooper in the book (XYZ) I am a middle-aged grumpy old bastard working in computers for a day job, struggling with the ridiculous pace of change and trying to keep up with the young’uns. Where I am unlike him, I also write Public Relations content for technology firms. Once upon a time, I was a freelance writer in the UK but that all changed when we came out to New Zealand in 2009 (that’s me and the family). That’s where I live now, in the coolest capital city in the world, Wellington.

Where did/do you get your ideas from?
XYZ is a departure from my first book (and the numerous unpublished manuscripts) in that it’s not a thriller. My first, The Donated, took its inspiration from science-gone-wrong in the pursuit of profit, where as XYZ is a sort-of reality-drama-cum-comedy-observational-family-breakdown-thing taken from my own experiences working in the computing industry.

Somebody once said that ideas are like a***holes (uk spelling), everybody’s got one. Lucky for me, and possibly unlucky for everybody else, I’ve had more than one or two ideas over the years and I do have an engineering/science bent to my overindulged grey matter.

Are any of your characters based (however loosely) on anyone you know?
I took a job with hip-young firm at the same time my daughter was entering nano-wri-mo and to support her I began recording my own hyperbolic observations. One thing led to another and Jack Cooper’s miseries were born (he’s the hero/anti-hero).

I cannot possibly comment on whether or who some of the other characters might be based upon, otherwise I’d probably be killed — or at least horribly maimed.

How do you pick your characters’ names?
Jack — Good, solid, generation X/Boomer kind of name – conservative and perhaps a bit grumpy.
Cooper — British, white, some obscure reference to beer and wine.

Other names I’ve chosen to represent popular generational names (such as Emily for Jack’s twenty-two year old daughter, and Freya for his younger lover). The generation gap is a theme all the way through and I tried to show that in the names as well as everything else.

Can you share your writing process with us, in a nutshell?
OMG yes! I’m excited about this question because during the writing of XYZ I came across a new technique called, strangely, “The Pomodoro” — which is Italian for tomato.

In this technique you make a pact with yourself to focus utterly, totally, without question and without distraction, on writing for 25 minutes at a time. That means no internet research, no quick looking up of etymology, leaving Bryson’s mind the gaffe on the shelf, no coffee, no loo, no answering phones etc etc. You write.

After twenty five mins you get a five minute break to do all those other things, and then you get back into it for the next Pomodoro.

It’s amazing. I doubled my effective word rate per hour and found a voice for the main character that flowed from my mind like wine from a barrel. I’m very happy with this way of working, and I use it for all my content work now.

In case you’re wondering, it’s called pomodoro after those timers shaped like tomatoes.

Who are your top 5 favourite authors?
Nick Hornby — he lived near me when I was a kid (I never met him) but I love his writing.
Ian McKewan – awesome characters and dialogue.
John Steinbeck – East of Eden is magnificent.
Ben Elton — I’ve just started getting back into him since a bit of a rest (twenty year rest).

Were you a big reader as a child?
Absolutely yes. I devoured books from Asterix the Gaul to James Herbert’s Rats and from The Time Machine to LOTR and Dickens (when I got a bit older).

If you could re-write the ending to any book what would it be and what would you change?
I’ve always wanted to know what happens after they clear all the Triffids from the Isle of Wight in John Wyndham’s Day of the Triffids. He just left the next part of the book hanging. I mean, it’s post-apocalyptic, the world’s closed for business and they could have a fresh start from Shanklin Sands and Osbourne house. What was he and his publisher thinking?

I would have them slowly recolonise the UK mainland and face pirates and evolved triffids. They would attempt to establish a fair, socialist government, but be challenged by those that were determined to rebuild the old world order and use the triffids against them. Imagine legions of genetically modified and mutated triffids bearing down on the Dorset coast to blind the Islanders of their red vision.

Is there a book you wish you had written?
Err… Day of the Triffids?

If you wrote an autobiography, what would your title be?
Love your partner, love your kids, drink wine.

If you could invite any fictional character for coffee who would it be and where would you take them?
Zaphod Beeblebrox, and I hope he would take me to the restaurant at the end of the universe.

What are you working on right now?
Back to the day job at the moment. Though I have started to make notes for a kind-of sequel to XYZ about a man and his dog that have more in common with each other than either the dogs or the people around them. I think it might be called “Neither in nor out” — (seeing that written down for the first time it sounds as dull as an old bell — the name will have to change.)

Do you have a new release due?
It’s already available for the Christmas rush! Go buy!

What do you generally do to celebrate on publication day?
I sit in terror and wonder what on earth have I done. Holy f**k, now I have to start the marketing!

Thank you for taking the time to answer my questions, William! I have throughly enjoyed this interview 🙂 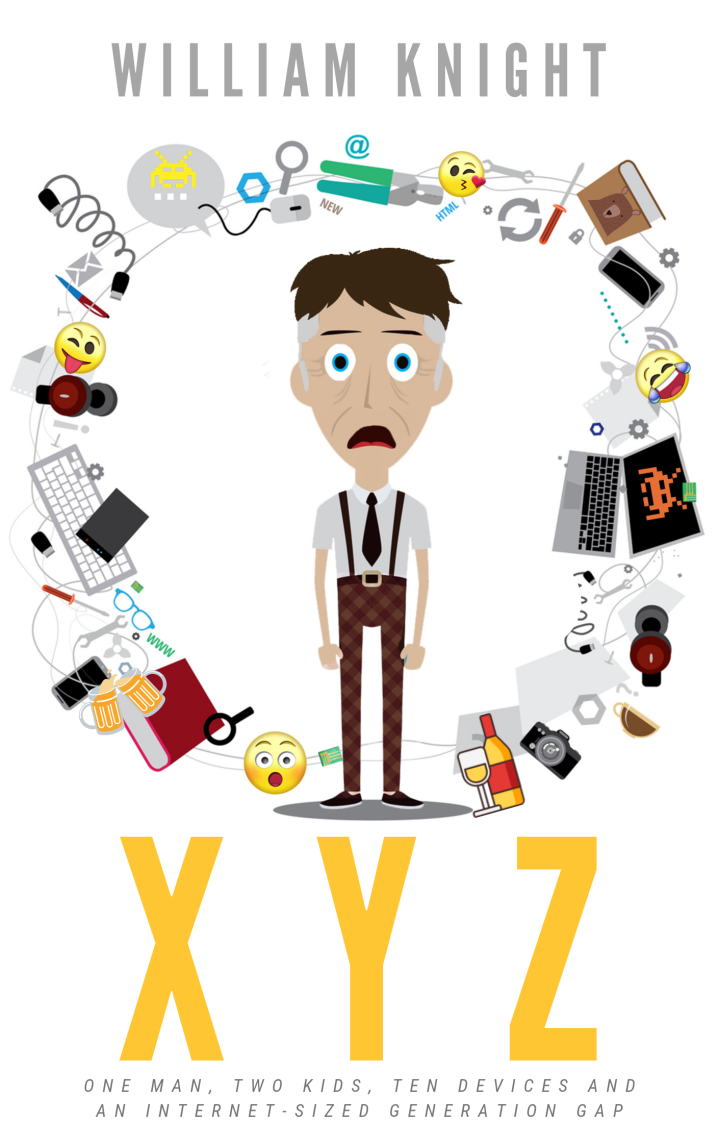 From a former Guardian and BBC writer, and author of The Donated, comes a hilarious story of mid-life crisis, family, technology, and coping with the modern workplace.

Jack Cooper is a depressed, analogue throwback; a cynical, alcoholic Gen-Xer whose glory days are behind him. He’s unemployed, his marriage has broken down, he’s addicted to internet hook-ups, and is deeply ashamed of his son Geronimo, who lives life dressed as a bear.

When Jack’s daughter engineers a job for him at totally-lit tech firm Sweet, he’s confronted by a Millennial and Zoomer culture he can’t relate to. He loathes every detail – every IM, gif and emoji – apart from Freya, twenty years his junior and addicted to broadcasting her life on social media.

Can Jack evolve to fit in at Sweet, or will he remain a dinosaur stuck in the 1980s? And will he halt his slide into loneliness and repair his family relationships?

William Knight has written for the Guardian, the Financial Times and the BBC, among many other publishers. He is a journalist and technologist currently living and working in Wellington, New Zealand.

A graduate engineer, he’s chased a varying career starting in acting, progressing to music, enjoyed a brief flirtation with handbag design, and was eventually wired into technology in 1989.

By 2003 his non-fiction was being regularly published in Computing newspaper in the UK, and he has since written about the many successes and failings of high-technology

The Donated (formerly, Generation), his first novel, was conceived from a New Scientist article in 2001 and was ten years in development. Subsequent novels, XYZ, Foretold, The Fractured, will be available, he says, “Sometime in the future. Hopefully not as long as ten years.”

One thought on “XYZ by @_William_Knight #BlogTour #Interview #LoveBooksTours”