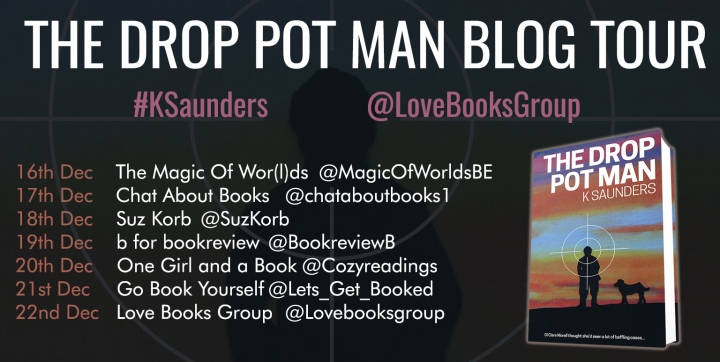 Many thanks to Kelly @ Love Books Tours for arranging the following interview with K Saunders…..

Where did you get your ideas from?

In the case of The Drop Pot Man, I thought, in the first instance, that I would like to set a novel based in the West Country landscapes I knew well. I once lectured on landscape perception so it was a chance to put my money where my mouth was!

I cannot recall why I decided on this setting for a crime novel with a female protagonist. But once I did there was no going back, as Detective Inspector Clare Morell seemed to appear from thin-air fully formed.

Are any of the characters based (however loosely) on anyone you know?

Some of the surnames in The Drop Pot Man are traditional West Country ones, but the main objective was to select names that are distinctive from those of the other characters. I’ve also tried, in many cases, to use names where both the first and the surname are relatively short.

Can you share your writing process in a nutshell?

Who are your five favourite authors?

This is a difficult one. I come across an author I like and then read all their works (Anita Brookner and Helen Dunmore are good examples) and later discover someone else. But I suppose Jane Austen and Thomas Hardy are always there – as are the poems of Carol Ann Duffy.

Where you a big reader as a child?

When I hobbled into a creative writing class in Weymouth after too much running on the downs and coastal footpaths of south Dorset.

If you wrote an autobiography, what would the title be?

I don’t know. But I have an ancestor whose epitaph on his impressive gravestone, translates from the Welsh as, ‘Good with words – if a little mad.’

This is a no-brainer on both counts. Clare Morell, and we’d go to the café which Bellini’s is vaguely based on.

I’m trying to put together short stories and pieces about growing up and also, when travelling, often being in the ‘wrong place at the wrong time’ – such as Bolivia during a ‘peasants revolt’ when the coach was stoned; having a bag opened by a couple of Cuban Customs heavies when they found a bag of ‘white powder’ (they took some convincing it was Tesco’s skimmed milk for brew-ups), and being threatened in Tibet by a stoned Chinese soldier (who looked about twelve) with a loaded rifle.

At first glance it appears to be a straightforward shooting accident…

After ten years with the Greater Manchester Police, Detective Inspector Clare Morell thought she’d seen a lot of baffling cases; but newly assigned to deep in the heart of the West Country, she finds herself in an unfamiliar world. There are shepherds and Romanys, who speak in strange tongues; a Lord Byron lookalike army captain and a lethal killer who just might be an ETA trained hit-man. The strange lowland heath in the beat where she now works triggers an old childhood fear and there is the growing sense that her new home is not only disturbing but somehow threatening…

And then… there’s Ellis.