Hi and welcome to my stop on Christopher Lowery’s The Mosul Legacy blog tour with Urbane Publications and Love Books Group Tours….. 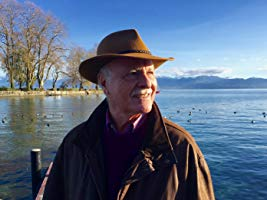 Christopher Lowery is a ‘Geordie’, born in the northeast of England, who graduated in finance and economics after reluctantly giving up career choices in professional golf and rock & roll. He is a real estate and telecoms entrepreneur and inventor and has created several successful companies around the world, including Interoute Communications and Wyless Group.

Vol I. The Angolan Clan. The genesis is his life in Portugal during and after the revolution and the ‘liberation’ of the African colonies, which results in a dramatic international murder mystery in 2008.

Vol II, The Rwandan Hostage is based upon an incident during the Genocide of 1994 which spawns subsequent catastrophic events in 2010.

Vo II. The Dark Web describes a multi-nation cyber-warfare attack in 2017, demonstrating the inherent dangers of the internet.

The Mosul Legacy, set in 2016, deals with the consequences of the jihadist wars in Iraq and Syria, the menace of a European terrorist attack and the desperate plight of a family of refugees fleeing the war-zones.

Chris also writes patents, poetry, children’s books and songs. He and his wife Marjorie live between London, Geneva and Marbella. Their daughter, Kerry-Jane, a writer/photographer, lives in London.

From my life’s experiences, both personal and business; countries resided in and events witnessed.

– Fleeing Portugal after the Revolution of the Carnations in 1974,

I have no idea.

As I did in business, I see everything as a jigsaw puzzle. The end picture is clear to me and I try to find or invent the pieces to compose it.

I have met many authors, they are just other people doing something they enjoy.

Yes, I started reading very young and devoured the classics before I was required to in school.

Many, but I’m content to have written several myself.

Wait and see. (That’s not a title, I haven’t decided upon it yet.)

A number of song productions.

The Dark Web is described above.

The Mosul Legacy is published on Sept 27th by Urbane Publications.

Thank you for taking the time to answer my questions anyway, Christopher 🙂

Thank you for asking.

Christopher Lowery is a ‘Geordie’, born in the northeast of England, who graduated in finance and economics after reluctantly giving up career choices in professional golf and rock & roll. Chris left the UK for Switzerland in 1966 and has lived and worked in six different countries over the last 50 years. He was a real estate developer and Telecoms/Internet entrepreneur and inventor and has created several successful companies around the world, notably Interoute Communications, now Europe’s largest cloud services platform provider and Wyless Group, now part of Kore Telematics, one of the world’s largest Internet of Things providers.

In 2014, Chris started writing historically/factually based thrillers and the first two volumes of his African Diamonds Trilogy – The Angolan Clan & The Rwandan Hostage, were published by Urbane Publications, a UK publisher. These books are based upon his family’s experiences during the Portuguese Revolution of the Carnations of 1974 and his daughter’s work as a delegate with the ICRC in Rwanda in 1996. The third volume, The Dark Web, was published in April 2018, and draws on his experience as one of the creators of The Internet of Things, between 2002 and 2016. His fourth book, The Mosul Legacy, an unrelated story, will be published in September 2018. His illustrated All About Jack stories for children are written in humorous verse, and were published privately.