I am delighted to be joining in with Grace Lowrie’s Safe With Me blog tour! 🙂 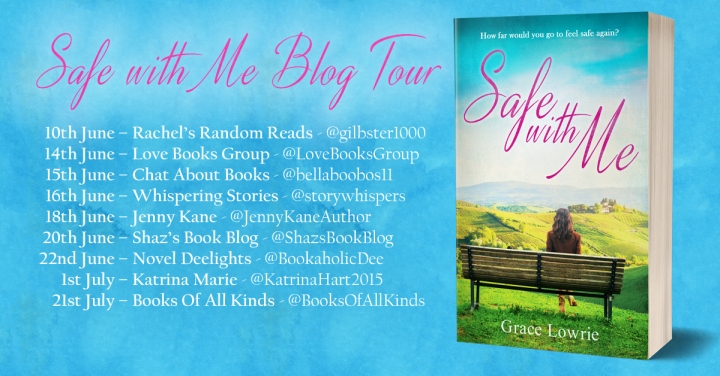 Many thanks to Karen Bultiauw, at Accent Press, for the opportunity to take part.

Hi Kerry, thank you so much for inviting me to your blog.

I’m a romantic introvert with a penchant for rock music, art nouveau design, blue cheese and grumpy ginger tomcats. Having worked as a collage artist, sculptor, prop maker and garden designer over the years, I now write contemporary women’s fiction from my Hertfordshire home. Safe With Me is a standalone novel, the first of three, set in the fictional town of Wildham. It is my second novel to be published by Accent Press.

I’m fascinated by human relationships and tend to conjure up intriguing questions in my mind, for example: What if you were abandoned as a child and your only family was a foster brother/sister? What if you were then separated? Would that bond always exist between you? In this case the answering of these questions led me to create Safe With Me.

I don’t think so – I tend to draw on aspects of a variety of different people’s personalities, both real or imagined, to create my characters. Some of my friends and family may recognise parts of themselves in the pages of my books, but hopefully never enough for them to take any offence.

That’s often tricky as the name can make or break a character for a reader. Sometimes a name comes instinctively once I start hearing my character’s voice but not always, and I do prefer to put a name to the voice early on. One of my favourite sources of inspiration is watch the closing credits of films and TV shows – it’s a great way of picking up interesting and unusual names.

I tend to start with a great idea for an ending and a feel for some strong characters and then plot to create a beginning and a middle. Life is busy and I haven’t yet managed to carve out a set time each day in which to write, but I’m constantly scribbling notes and bits of dialogue on scraps of paper and then spend hours at a time typing furiously at my laptop.

I would like to meet Audrey Niffenegger to ask her about the sequel to The Time Traveler’s Wife that I believe she’s working on.

Yes. My parents are both keen readers and got my sister and I into books from an early age. After a long day at work my dad would fall asleep reading The Hobbit to me at bedtime – somehow he managed to keep talking but all the words would turn to gibberish as he drifted off.

As soon as I was able – I wrote a lot of poetry and short stories at school and won a competition for a Haiku about a post box. I stopped during my teenage years, through a lack of confidence more than anything, but found my way back to it again about ten years ago on a lonely trip to Malta.

I loved reading The Miniaturist by Jessie Burton but I found the ending frustrating – too many loose ends that I would like to tidy up. I’m hoping she’s working on a sequel.

If Nobody Speaks of Remarkable Things by Jon McGregor is absolute genius but easily accessible – everybody I recommend it to loves it. I’m really looking forward to reading his latest work; Reservoir 13.

Is it shallow to say Jamie Fraser from Diana Gabaldon’s Outlander books? I’d invite him to my place for coffee so that I wouldn’t have to share him with the rest of the female population.

I’m currently editing the next two books in The Wildham Series and writing the first draft of a fourth.

Safe With Me is due out on 22nd June 2017 and is already available to pre-order here:

I have a bottle of bubbly on ice ready to share with my family, as a thank you for all their support.

Only that I’m very grateful for this opportunity and appreciate all the readers out there that make being an author so rewarding.

Thank you for taking the time to answer my questions, Grace 🙂

How far would you go to feel safe again?
Abandoned as children, Kat and Jamie were inseparable growing up in foster care. But their bond couldn’t protect them forever.
From a troubled upbringing to working in a London greasy spoon, Kat’s life has never been easy. On the surface Jamie’s living the high-life, but appearances can be deceiving.
When they unexpectedly reunite, their feelings become too intense to ignore. But as secrets come back to haunt them, are they destined to be separated once more.

One thought on “Safe With Me #BlogTour #AuthorInterview @GraceLowrie1 @AccentPress @karenbultiauw”