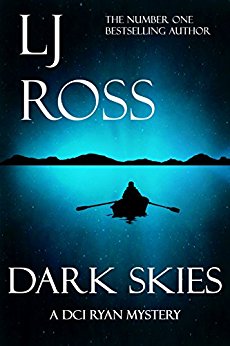 Well, I have to say that I have absolutely LOVED this series. I don’t think I’ve ever read a series in such a short time, which says it all really.

Dark Skies is another brilliant book in this brilliant series. What is Lowerson thinking of though!?? I’m really worried about him! Sorry, that won’t make sense to anyone who hasn’t read this already, but I think it highlights just how much I have connected with some of the characters in these books. Dark Skies is book 7, so I really do feel like I almost know some of them personally. The way L J Ross writes her characters makes them very real and I do find myself talking about them as if they are. I was reading one of the previous books in the car a couple of weeks ago and I said to my husband, ‘Awwww, Ryan and Anna are getting married.’ Obviously Steve’s reply was ‘Who?’ Lol! I did explain, but I think he thought I was losing the plot. The characters do make these books for me, even though they are very much plot driven stories.

In Dark Skies, Ryan and his team are faced with the mysterious death of a teenage boy who surfaces from the bottom of a reservoir. He has been preserved by the bog which would have been there before the water was added and initially they have no idea how long he might have been there. Could he be a local boy who was reported missing years before, but had seemingly run away and didn’t want to be found?

Then one of Anna’s students is found brutally murdered in a seemingly random attack, so the team have their work cut out as always.

I love the police procedural aspects, the way the investigation keeps me on my toes. I love how loyal (mostly!) the team are to each other and the banter they share. I also love how Jen Lucas (great name btw!) has thrown a cat amongst the pigeons. I can’t wait to find out more about her. I just hope Lowerson comes to his senses before it’s too late.

This book has it all, as does the whole series so far. I can’t imagine any murder mystery/crime fiction fans not enjoying them. I highly recommend and can’t wait for book 8!

Many thanks to L J Ross for my kindle and signed paperback copy of this fab book. LOVED it!

FROM THE #1 INTERNATIONAL BESTSELLING AUTHOR OF HOLY ISLAND

Beware what lies beneath…

One fateful, starry night, three friends embark on a secret camping trip but only two return home. Thirty years later, the body of a teenage boy rises from the depths of England’s biggest reservoir and threatens to expose a killer who has lain dormant…until now.

Detective Chief Inspector Ryan returns from honeymoon to face danger from all sides. In the depths of Kielder Forest, a murderer has escaped justice before and will do anything to protect the secrets of the past. Meanwhile, back at Northumbria CID, an old foe has taken the helm as Superintendent and is determined to destroy Ryan at any cost.

Who will prevail in Ryan’s most dangerous case yet?

Murder and mystery are peppered with romance and humour in this fast-paced crime whodunit set amidst the spectacular Northumbrian landscape.

“LJ Ross is the Queen of Kindle” – Sunday Telegraph

LJ Ross is the author of the international #1 bestselling series of DCI Ryan mystery novels. Her debut, Holy Island, was released in January 2015 and reached number one in the Amazon Kindle UK best sellers chart. ​Its sequels, Sycamore Gap, Heavenfield, Angel and High Force were all top five UK best sellers and she recently hit the top of the charts again with her sixth book, Cragside, which was number one in the UK on pre-orders alone.The novels are all available to purchase in e-book, paperback and audiobook formats on the Amazon store, as well as in selected independent bookshops. Holy Island is also available in German translation. Now, she writes full time and lives with her husband and son in Bath. She enjoys reading all manner of books, travelling and spending time with family and friends. If you would like to connect with LJ Ross, she would be very happy to hear from you:https://www.facebook.com/LJRossAuthorhttps://twitter.com/ljross_authorhttp://www.ljrossauthor.comhttp://www.lovesuspense.comlj_ross@outlook.com

*All links to buy are included in the review posts*