I should have read this book like a million years ago (sorry, John!). Having read, and loved, books 1 and 2, Cathedral of Lies and Field of Lies I pre-ordered Guardian of Lies as soon as it was available. Unfortunately, other commitments have prevented me from reading it until now. When I decided to join in with the #20BooksofSummer20 challenge it was the perfect opportunity to bump this up my list and I am SO glad I did!

Oh, my days! This book is full of action and intrigue from the very first page!

At the beginning of this book we find Doug Taylor comforting, and supporting, Kim Harding following the death of her father. However, things begin to get complicated when her father’s bungalow is broken in to. It doesn’t take them long to realise that whoever broke in seems to be after sensitive information, rather than anything of monetary value, and this is where the story takes off in a whole new direction. What might her Dad have been involved in?

A journalist determined to get his big story has no idea what he’s getting himself into and soon finds himself in serious danger.

I love the attention to detail throughout this book, especially as it’s partially based on true events. Extremely scary true events! I think I held my breath on more than one nail-biting occasion.

I love the relationship Doug and Kim share, both professionally and personally. They make a great team. We also see a more vulnerable side to Kim dealing with the death of her father.

There are many fascinating characters throughout this story and the chain of events made me suspect pretty much all of them of foul play at one point or another. I had a brilliant time following Doug and Harding in their quest to discover the truth.

A death in the family and an unremarkable house burglary suddenly catapult Taylor and Harding outside their comfort zone and into the murky world of the Security Services. The interest of MI5 and connections to a horrible death thirteen years earlier take the two detectives on a bizarre journey to an unknown destination with a frightful history.
A risk-taking journalist uses criminal methods to try to get to the big story first, but has no idea exactly what he is getting into or of the dreadful consequences of his actions.
Foreign agents, espionage and high powered thrilling action take the narrative forward as an issue of serious national security emerges. The fact that the story is based on many real events is all the more breath taking. 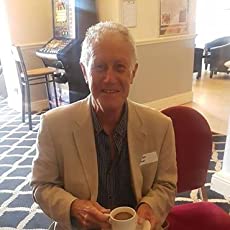 Hi I’m John Pye, a retired UK Detective born in 1950. Writing has been both my passion and my hobby since retirement and my career as a police officer was without doubt the motivating force behind this. Little did I realise when I joined the force just how much written work was involved and as an eleven plus failure it was a big learning curve.
It wasn’t until I finally came to hang up my handcuffs some 27 years later that I realised that I’d become quite adept at writing and actually enjoyed it. I’ve always had a passion for history and so initially I completed a few articles for a local newspaper supplement – these were published and I realised that I had been bitten by the writing bug!
I started to work on a mostly humorous account of my police service which I eventually published as a kindle book under title ‘The Nick of Time’. I had to go through more of that learning curve in attempting to get my book published via conventional methods. It took a few painful years before the almost insurmountable difficulties of being ‘an unknown’ actually got me to ‘Kindle’. The Nick of Time still surprises me with its regular down loads and great reviews.
I published my first novel (Cathedral of Lies),a crime/thriller, murder mystery on Kindle in 2013 and quickly followed it up with a true, short VAMPIRE story (Vampire of The Villas) later that year.
Field of Lies arrived on Kindle in May 2015 as number 2 in the Detective Inspector Doug Taylor ‘Of Lies’ series. I had not intended writing a series but as the Cathedral of Lies and its characters had been so well received decided to give it a try. It worked and I was soon getting calls for number three in the series.
Guardian of Lies (number 3) was published on kindle in September 2017. All the books thrive on a diet of high powered action, intrigue and peculiar personalities. Much of the inspiration originates from my involvement on several high profile criminal and murder cases and having to rub shoulders with odd characters both inside and outside ‘the job’.
All my stories are inspired by and connected to some real life events and each of the ‘Of Lies’ stories has a code word which gives access to a secret page within my website. The secret page gives the detail along with photos and videos connected to the real story behind the story. Indeed I was stunned to see only a matter of weeks after publishing Guardian of Lies that the Salisbury Novichock attempt on Sergei Skripal’s life became big news – Guardian of Lies is based on a nerve agent threat to the UK and featured Porton Down and Salisbury.
Looking back on my time as a police officer I realise that it was often the black humour and mischievous antics which helped to get us though some tricky and unpleasant events. That rascally mind-set has always stayed with me and often comes to the surface in my writing. An impromptu comedy scene occasionally appears in the midst of a serious setting (this was always so true to life).
During my police service I regularly found myself in all manner of awkward situations engaging with a variety of strange, odd and unpleasant people as well as a plethora of wonderful helpful folk. Consequently I tend to model characters upon former colleagues as well as criminals and casual acquaintances. My choice of names for these individuals stems from a mix of real life names – a jumble of Christian names and surnames. The occasional scan through the phone directory can also provide a great ‘handle’ for a new character. I feel however, that it is important to try to stay close to the real world – it might seem like a good idea at the time to give your main ‘action man or woman’ a flashy name but it can be a turn off for the reader if it’s too improbable.
I am a big fan of Ian Rankin’s Inspector Rebus and readily identify with the reality he creates. I also love Frederick Forsyth and Joanne Harris as great authors.
Thank you for reading
John