Today I have the pleasure of joining in with Legend Press’s blog tour for Greer Macallister’s paperback release of THE MAGICIAN’S LIE. 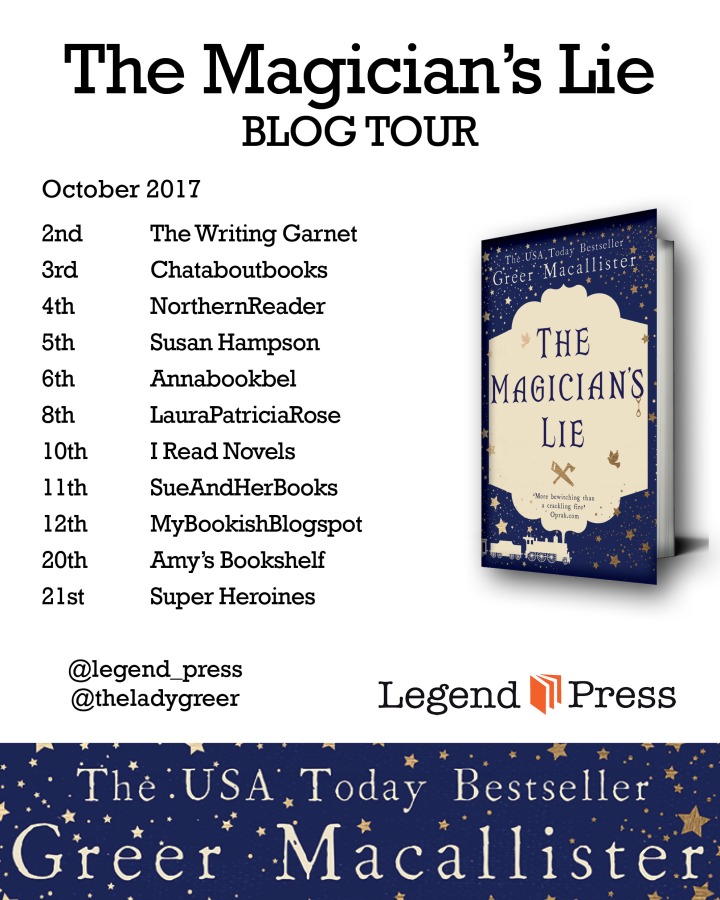 I have a Q&A with the author herself, as well as the opportunity for you to win a hardcopy of the book, courtesy of Legend Press.

My debut novel The Magician’s Lie is sometimes described as Water for Elephants meets The Night Circus. It’s set in 1905 and it’s about a notorious female illusionist accused of her husband’s murder – with only one night to convince a small-town policeman of her innocence.

The Magician’s Lie was inspired by an absence – I realized I’d seen countless images of and references to male illusionists cutting women in half, but never anything about a female magician cutting a man in half. So I wondered “What if?” and started writing about a woman working in the golden age of stage magic in the US, around 1900. And very early on in the process I realized that such a woman would be very controversial, so if she were accused of murder, everyone would believe she did it, whether she did or not. So the whole time I wanted the reader to be wondering about her guilt or innocence.

Not really! To help with visual descriptions, though, I’ll often pick out an actor for each character. Then I’m not just talking about their brown hair or blue eyes every single time the character comes up. Some of my characters are based on real people who existed, like Adelaide Herrmann, the Queen of Magic, but given the timeframe, I don’t actually know them.

Names are tough, but that’s one of my favorite parts of the process. For historical fiction I always start with lists of names that were popular at the time. The Social Security Administration in the US has lists of the most popular baby names from every year after 1880, and I rely on those heavily for inspiration.

I’m a sloppy writer. I get things down on the page quickly and then rewrite, rewrite, rewrite until I get the book to where it needs to be. For The Magician’s Lie, that took five years.

So hard to choose, but I love nearly everything by Margaret Atwood, Neil Gaiman, Madeleine L’Engle, Barbara Kingsolver and Jane Austen.

Absolutely, from the very beginning. I was reading before I turned three and haven’t slowed down since.

Not quite as early as I was reading, but close. I was writing poems in second grade, short stories in fourth. I wasn’t a good writer for many, many years after that, but the passion was there.

Ooh, great question! Nothing really comes to mind, but I will mention a fabulous novel by Carolyn Parkhurst called The Nobodies Album, which is about an author who decides to go back and rewrite the endings to all of her novels. As a writer it can be hard to let go of books and I love how she spins this idea into a fascinating, dark meditation.

In the US, The Magician’s Lie came out on the same day as The Girl on the Train by Paula Hawkins, which you may have heard of, as it’s sold approximately a gazillion copies. I don’t mind telling you I wish I had that level of success.

My second book, Girl in Disguise, is out in the US – it’s inspired by the real-life first female detective, Kate Warne. Not sure when it’s due to come out in the UK, but I do hope my UK readers will be able to get their hands on it!

A fancy lunch is always nice. I know a lot of people don’t like to eat in restaurants by themselves, but I find it really lovely and indulgent. Of course I take a book with me to read, so I’m not really alone. A good book, a nice lunch, a glass of champagne – that’s how I celebrate.

My website greermacallister.com is a great place to see what I’m up to, and there’s a contact form on the site for anyone who wants to reach out. I’m on Twitter and Instagram at @theladygreer and on Facebook at facebook.com/greermacallister. I feel very lucky to be writing and publishing now when it’s so easy for readers and writers to connect—it’s pretty amazing!

Thanks for taking the time to answer my questions, Greer 🙂

The Amazing Arden is the most famous female illusionist of her day, renowned for her notorious trick of sawing a man in half on stage. But one night she swaps her trademark saw for an axe.

When Arden’s husband is found dead later that night, the answer seems clear, most of all to young policeman Virgil Holt.

Captured and taken into custody, all seems set for Arden’s swift confession. But she has a different story to tell. Even handcuffed and alone, Arden is far from powerless, and what she reveals is as unbelievable as it is spellbinding.

A magical and mysterious historical thriller, perfect for fans of The Night Circus and Water for Elephants.

Fancy winning yourself a paperback copy?

Just comment ‘Yes please!’ on this post and I’ll pick a winner at random. (Open until Monday 9th October)

Thanks is advance for joining in!

If you’re not lucky enough to win, buy your copy here…..