A Spell in the Country

“Dee is a Good Witch but she wonders if she could be a better witch.

She wonders if there’s more to life than Disney movie marathons, eating a whole box of chocolates for dinner and brewing up potions in her bathtub. So when she’s offered a chance to go on a personal development course in the English countryside, she packs her bags, says goodbye to the Shelter for Unloved Animals charity shop and sets a course for self-improvement.

She likes to find the easy path through life: what her good looks can’t get for her, a few magic charms can. But she’s bored of being a waitress and needs something different in her life. So when a one night stand offers her a place on an all-expenses-paid residential course in a big old country house, she figures she’s got nothing to lose.

Jenny is a Wicked Witch. She just wishes she wasn’t.

On her fifteenth birthday, she got her first wart, her own imp and a Celine Dion CD. She still has the imp. She also has a barely controllable urge to eat human children which is socially awkward to say the least and not made any easier when a teenager on the run turns to her for help. With gangsters and bent cops on their trail, Jenny needs to find a place outside the city where they can lay low for a while.

For very different reasons, three very different witches end up on the same training course and land in a whole lot of trouble when they discover that there’s a reason why their free country break sounds too good to be true. Foul-mouthed imps, wererats, naked gardeners, tree monsters, ghosts and stampeding donkeys abound in a tale about discovering your inner witch.”

Hi, we’re Heide Goody and Iain Grant and we co-wrote ‘A Spell in the Country’. We write comedy novels together and A Spell in the Country is our tenth novel. In this book, three modern day witches – Jenny, Caroline and Dee – meet at a residential training course for witches. They’re there for very different reasons: Dee is looking for some self-improvement and some self-discovery, Caroline is just looking for a good time, and Jenny is on the run because some very dangerous characters are trying to find her. There’s laughs and adventures and a hidden mystery. It’s like an all-girl Harry Potter story for grown-ups.

We get ideas from everywhere. We like to start with a big concept for the novel. The concept for ‘A Spell in the Country’ started off as ‘Private Benjamin with witches’. I believe it came as a result of a train journey that we took together. We wanted to come up with some ideas for future novels so we jotted film titles on pieces of paper and then combined them to see what emerged. This is such good fun that we have now implemented a version on our website for anyone to play with. You can find it here: http://www.pigeonparkpress.com/random-story-generator

We go through various processes to pick character names. We do believe that names should tell us something about the character, even if it’s only a hint at their age and social background. But, with A Spell in the Country, we did something we’ve never done before. We reached out to an on-line book group – THE Book Club on Facebook, which has over 8,000 members – and asked members if they would let us use their names for our characters. We had so many volunteers so we could really pick names that we felt matched the temperaments of our characters. So, when you read A Spell in the Country and the exploits of Jenny Knott, Caroline Black and Dee Finch, remember that those are real people out there in the world somewhere (although we cannot guarantee that they’re actually witches).

We meet up to plan, but we do all of the writing separately.

We plan out roughly what will happen in each chapter, and then when we get close to writing it we brainstorm ideas and jokes for the chapter.

We have various models for working, but our favourite model is to write two chapters at the same time. One of us writes a synopsis for a chapter. We swap over so that we write a chapter based on the other’s synopsis, then we swap back for an edit.

As a writing team, one of the first things we did was discuss which writers we both admire. We have been avid readers of Neil Gaiman and Terry Pratchett. If we could have but an ounce of the storyteller’s craft from one and the warm humour of the other then we’d be very happy

Iain: I devoured books as a child, two or three novels a week. I remember progressing from Enid Blyton’s Magic Faraway Tree books to the Target Dr Who novelisations to the fantasy novels of Tolkien, Anne McCaffrey, Terry Brooks and then Terry Pratchett who was clearly a big influence on the novels I enjoy writing today.

Heide: I also loved Enid Blyton as a child. I then found a huge stash of paperbacks in our garage. I read the James Bond novels and became hooked on The Saint books. I was a member of The Saint fan club as a sixteen year old!

Iain: I sometimes think that question should be ‘why didn’t you stop writing?’ because most children will write little books for their own amusement. I remember starting to write what I thought would be a novel at about the age of thirteen (I seem to recall it was about an evil bounty hunter called Scruncho!). I wrote my first actual novel at the age of nineteen, a futuristic murder mystery. I must have written at least five or six books in the years that followed until I wrote one that I thought was publishable (it wasn’t). Nearly, twenty years after thinking I could be a ‘proper’ writer, I wrote my first published novel, Clovenhoof, with Heide.

Heide: I have always written, but I made a decision around 1998 to take it seriously and I joined a local writers’ evening class where I learned a lot from tutor Keith Lindsay who’s a sitcom writer. Bringing up children distracted me for a while, but in 2010 I joined Birmingham Writers’ Group, which was an enormous boost. I finished short stories, finished a novel and started writing with Iain, who was also in the group.

Heide: Would you believe the first money I ever made from writing was for doing just that? There was a competition to re-write the ending of a famous book. I chose Brighton Rock and changed the ending so it wasn’t so bleak for Rose. I won £100

We’re always working on the next book or, more often, the book after the next book. We’re currently writing books 7 and 8 in the Clovenhoof series. Yes, we’re writing both at the same time. We hope they will be published later in 2018, although with the third book in our Oddjobs series and another comedy novel. 2018 could be the year in which we published five full-length novels. Let’s see!

There’s the public celebrations which are sometimes physical launch parties and sometimes virtual launch parties on Facebook (which are a lot of fun). There’s also the private celebration. We’ve instigated a celebration now referred to as the Spousemeal. Whenever we’ve finished a book, we take our spouses out and all go for a celebratory meal. At these, Simon and Amanda (our other halves) attempt to eat/drink all profits that our book might make. They sometimes succeed.

Thank you for taking the time to answer my questions, Heide & Iain. 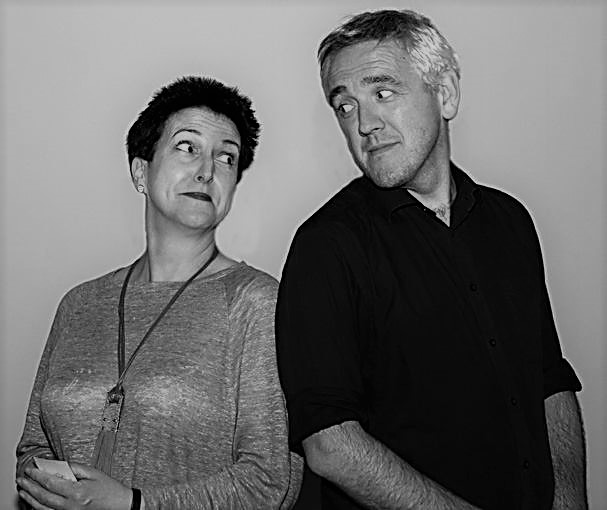 Heide Goody is the stupid one in the writing partnership and Iain Grant is the sensible one. Together, they are the authors of seven novels, two short story collections and a novella.

The ‘Clovenhoof’ series (in which Satan loses his job and has to move to Birmingham) has recently been optioned by a Hollywood production company. Their latest novel, Oddjobs 2: this time it’s personnel, was published in August 2017.

Heide and Iain are both married, but not to each other.

The package, worth over £100 contains…

· A pair of green and black stripy tights

· A Yankee candle in “Forbidden Apple”

· A set of wand-shaped makeup brushes

· A gothic notebook (for spells!)

· A bookmark featuring a squashed witch (with just the legs sticking out!)

Stack Those Books
Chat About Books