It was most definitely about time I read The Black Hornet, which is the second book in the James Ryker series, as it has been a while since I read book one, The Red Cobra. I have thoroughly enjoyed catching up with Ryker again. I only wish I could have properly immersed myself in his world. It’s been a busy week or so and I’ve found myself feeling quite frustrated regarding the lack of time I’ve had to read, but it’s just how it goes sometimes. However, Rob Sinclair’s writing never fails to draw me in. His memorable characters and plots are just as compelling whether dipping in and out or reading large amounts at a time, although I do prefer the latter.

Ryker is one of my favourite character’s in a book series. He’s very charismatic, in his own way. Very intriguing! He hasn’t had the easiest of lives and bares many scars, both physically and mentally, and his nightmare continues in The Black Hornet. He finds himself back in Mexico, searching for the love of his life, Lisa, who he found to be missing on returning home. He gets somewhat side-tracked (to say the least!), but Lisa is never far from his mind. He needs answers and he needs them fast. The journey he takes to find the answers he’s looking for is a dangerous one and would absolutely terrify me as it would most people, I would imagine. Ryker is confident in his own abilities though, with plenty of experience dealing with the sort of people he’s having to deal with, and he is determined to discover the truth.

This is another fast-paced, cram packed full of action crime thriller which is brilliantly written, as always. I have to say, I love the fight scenes! I’ve probably said it before, but these books would make an awesome television series, in my opinion.

I will be reading book three as soon as possible!

The Black Hornet: an action packed and utterly gripping thriller from the best-selling James Ryker series

What do you do when the love of your life vanishes without a trace? If you’re ex-intelligence agent James Ryker you search for the answers whatever the cost, however much blood and sacrifice it takes…

Six months ago Lisa was taken from Ryker, and he’ll stop at nothing to find out who is responsible and why. Following a trail to Mexico, the ex-Joint Intelligence Agency asset soon finds himself in the firing line of enemies he long thought he’d left behind. Set-up for the murder of a former informant, Ryker is thrown into a crumbling jail run by The Black Hornet, the notorious leader of a Mexican drug cartel. But what connects the cartel to the informant’s murder, and to Lisa’s disappearance? And just who is the mystery American claiming he can help Ryker in his hour of need?

The Black Hornet is the second book in the bestselling James Ryker series. Part Bourne, part Reacher, it’s an explosive and action-packed thriller to rival any other. 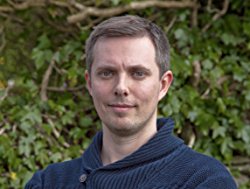 Rob is the author of the critically acclaimed and bestselling Enemy series and James Ryker series of espionage thrillers. His books have sold nearly half a million copies to date with many reviewers and readers having likened Rob’s work to authors at the very top of the genre, including Lee Child and Vince Flynn.
​
Rob began writing in 2009 following a promise to his wife, an avid reader, that he could pen a ‘can’t put down’ thriller. He worked for nearly 13 years for a global accounting firm after graduating from The University of Nottingham in 2002, specialising in forensic fraud investigations at both national and international levels. Rob now writes full time.

Originally from the North East of England, Rob has lived and worked in a number of fast paced cities, including New York, and is now settled in the West Midlands with his wife and young sons.